In The Future, You Can Control Your Tesla From Your Watch 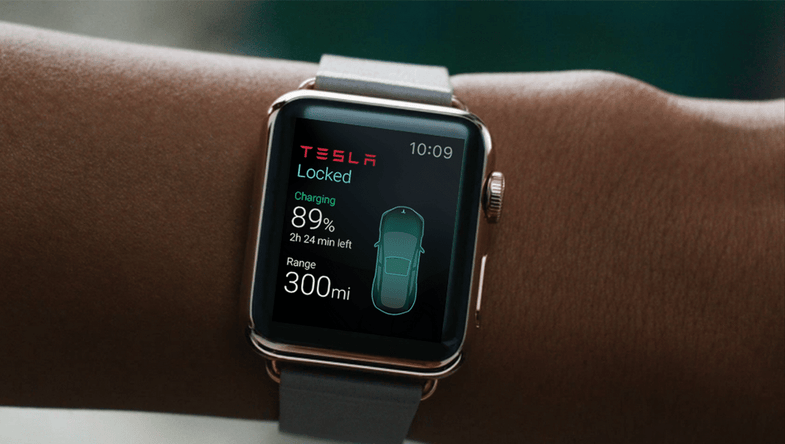 If you’re a Tesla Model S owner, you’re already part of a technologically elite crowd, so it’s hardly out of the question that you might be in the market for an Apple Watch when the wearable device ships this April. But you might be further enticed by an app that promises to connect the two technologies. Thanks to an app developed by ELEKS, you may one day be able to control your Tesla right from your wrist.

Using your Apple Watch, you’ll be able to see your Tesla’s current battery status and available range, the state of climate controls in the car (and the ability to change them), and even the location of the vehicle. All of that certainly beats out my ability to see my car’s status from my watch (spoiler: I can’t). But ELEKS’s Tesla watch app takes it a step further, letting you control certain functions, like locking and unlocking the doors, turning on the headlights, and making the car beep.

None of these features are unique to the Apple Watch; the Model S can already be controlled via a web-based application programming interface (API), and Tesla offers its own apps for iOS and Android. Still, the ability to control them from your wrist is certainly novel and delightfully futuristic. Tesla, of course, may eventually offer its own Apple Watch app to control the Model S, but the ELEKS app may beat them to the punch.

With only a couple months left before the Apple Watch ships, developers are starting to open up about the kind of apps they’re creating for the sure-to-be popular wearable. To-do list maker Todoist has showed off an early version of its watch app, running on Apple’s simulator. So at least not all of the cool applications will require a minimum $50,000 investment in an electric car on top of a $349 watch. Which is great for my wallet.