This Bracelet Could Shrink Your Energy Bill 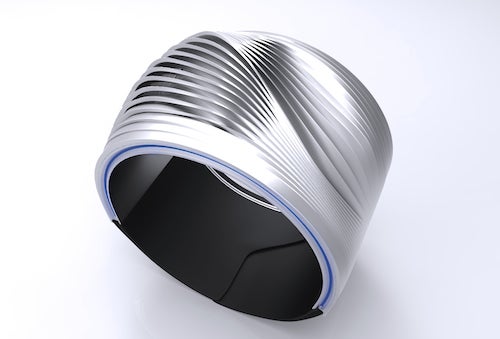 “Thermal is deeply personal,” says Sam Shames, co-founder of the MIT-based startup Embr Labs. “In any given environment, we all have a different idea of what comfortable is.”

That’s the condensed elevator pitch for Wristify, a battery-powered bracelet that heats or cools a small section of the wearer’s skin, presumably making sweltering conditions feel less miserable, or taking some of the chill out of an aggressively air conditioned office. In addition to improving our overall thermal comfort, this humble little wearable could shrink energy bills and carbon footprints in the home and the workplace.

And yet, Wristify also has crackpot potential—how much of a physiological difference can a tiny square of warmth or cold possibly make?

After wearing one of the Wristify prototypes for a few minutes, I never wanted to take it off.

This was late summer in Cambridge, Massachusetts, and the first day in a new office space for Embr Labs. Whatever image that conjures, imagine something humbler—a few workstations in a solitary room, on a floor of similar offices shared with other MIT startups. For reasons that weren’t clear, the air conditioning had yet to be turned on. Even less clear was why Wristify’s cycle of concentrated cooling on my radial artery—three seconds of cold, followed by a three-second lull—had made me completely indifferent to the lack of AC.

According to Embr Labs co-founder Matt Smith, cycling on and off allows the body’s thermoreceptors to be consistently surprised by each influx of heat or cold. “Your skin quickly adapts to constants,” says Smith, “whereas it actually overresponds to change.” Based on field tests with engineering prototypes like the one I tried out, the startup believes that Wristify only needs to increase or decrease skin temperature in one spot by about five to nine degrees Fahrenheit to have a noticeable effect. The device won’t change the wearer’s core temperature; the goal is to change your perception of temperature, and supply some measure of thermal comfort.

The moment I took off Wristify, I wanted to be back in its pulsing, cooling embrace.

But before Embr can transition from prototype to actual product, it will have to figure out how to make heat sinks fashionable. The core component in Wristify is a solid-state thermoelectric element, which pulls heat in one direction or the other when electric current passes through it. Excess heat is radiated from a spiky heat sink — a more elegant alternative to the coils used in traditional refrigeration, but a bulky and awkward structure to mount on your wrist. Embr Labs hopes to eventually miniaturize its heat sink, to incorporate the technology into smart watches or other wearables.

For now, the company is exploring sculptural, jewelry-like designs that have enough surface area to shed heat, while also appealing to Wristify’s initial target market: women in offices, who regularly add and remove layers throughout the work day.

The startup is currently planning a crowdfunding campaign to launch the first generation of Wristify, which will connect to smartphones via Bluetooth. In the long term, though, Embr Labs hopes to use its devices as data-collecting nodes within larger climate control networks, telling connected thermostats when a majority of users don’t need the AC on at full blast, thereby cutting energy use and costs—even a one-degree adjustment can burn as much as three percent less energy. Multiply that by every home and workplace in the country, and thermal comfort is the least of Wristify’s offerings.

Then again, startups are rarely known for their humility, or for their lack of long-term vision. Personal climate-control devices like Wristify could conceivably slash utility bills for individuals, provided their sync up with smart thermostats and air conditioners. But the larger-scale impact on climate control throughout entire offices or buildings would require legions of body-worn thermoelectrics. While there’s no indication that Wristify will achieve that level of mainstream ubiquity, it seems like a great fix to an everyday annoyance.

One more personal endorsement: the moment I took off Wristify, I regretted it, and desperately wanted to be back in its pulsing, cooling embrace. During a bout of fever this past week, I started fantasizing about getting my hands on a prototype loaner, to take the edge off the oscillating shivers and sweats. The promise of thermal comfort is powerful. So don’t wonder if Wristify works. If anything, wonder if it works too well. 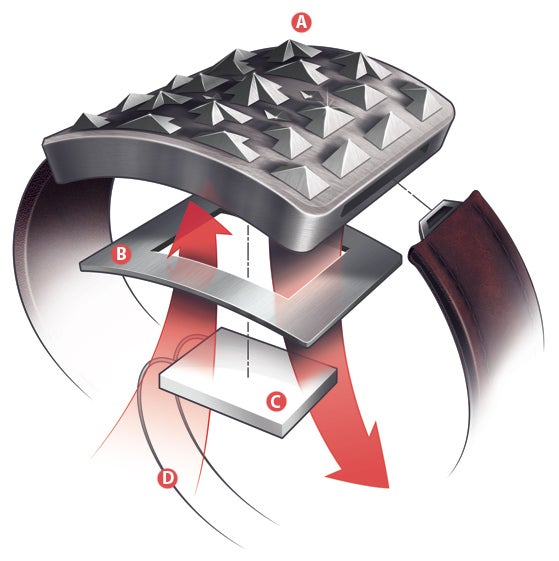 A. The heat sink will use textured aluminum–such as spikes, ridges, or bumps–to radiate excess heat.

B. An insulating layer separates the heat sink from the skin.

C. A thermoelectric element (TEM) uses a current to generate or remove heat.

D. The TEM is connected to a lithium-ion battery and a proprietary temperature-modulating system.

This article was originally published in the December 2014 issue of Popular Science, under the title “Climate Control On Your Wrist.” It has been expanded for the web.