Japanese Team Claims Discovery Of Elusive Element 113, And May Get To Name It

The claim needs to be verified by chemical authorities, but the team says it's the strongest evidence yet for the highly unstable element. 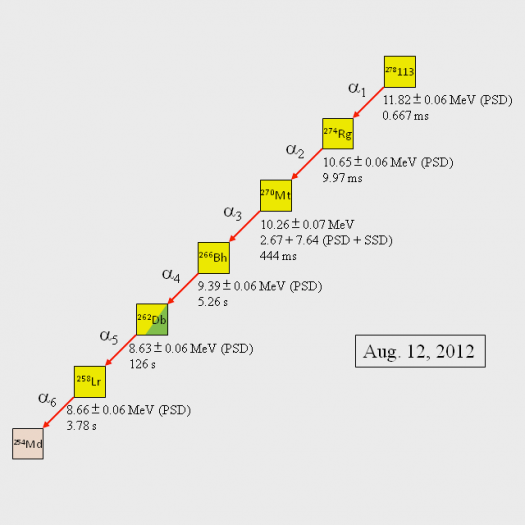 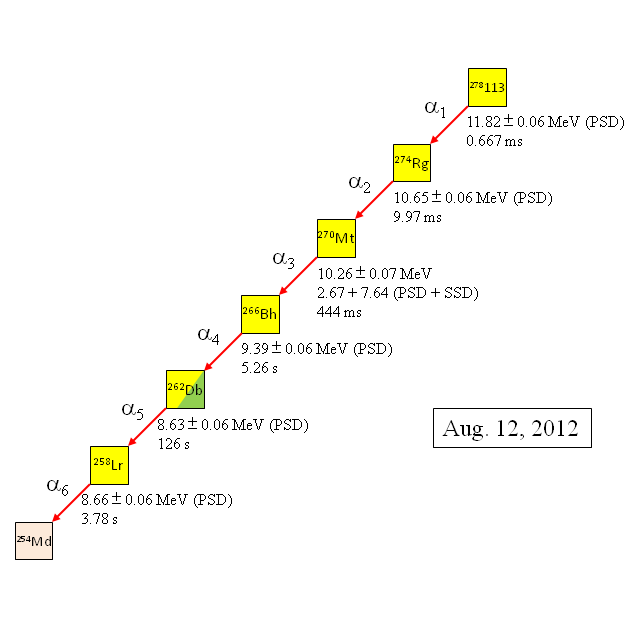 Japanese researchers claim they’ve seen conclusive evidence of the long-sought element 113, a super-heavy, super-unstable element near the bottom of the periodic table. It’s not yet verified by the International Union of Pure and Applied Chemistry, which regulates the table and the names of the elements — but if the IUPAC grants its blessing, the researchers could be the first team from Asia to name one of nature’s fundamental atoms.

Super-heavy elements do not occur in nature and have to be discovered in the lab, using particle accelerators, nuclear reactors, ion separators and other complex equipment. Scientists led by Kosuke Morita at the RIKEN Nishina Center for Accelerator-based Science have been hunting for 113 for nine years, and have claimed to see it a few times already — but the evidence has never been this clear, the team said today.

In an experiment in August, the team used a customized gas-filled recoil ion separator paired with a semiconductor detector that can pick out atomic reaction products. They created element 113 by speeding zinc ions through a linear accelerator until they reached 10 percent of the speed of light. The ions then smashed into a piece of bismuth. When the zinc and bismuth atoms fused, they produced an atom with 113 protons. This atom decayed, incredibly rapidly, into a series of daughter products, each an alpha particle (two protons and two neutrons) lighter than the parent atom. The daughter nuclides are the clear offspring of element 113, and only element 113, whose presence can thus be determined.

Retired Carnegie Mellon University nuclear chemist Paul J. Karol chairs the IUPAC Joint Working Party that will investigate the claim, and said via email that while the group is still in the vetting process, the results are “extremely encouraging.”

Back in 2004 and 2005, the same RIKEN team noticed what looked like element 113 in four decay events, which included the spontaneous fission of an isotope of dubnium (element 105). But the final daughter products were not established relatives of 113, so the IUPAC didn’t recognize the discovery. This time, the alpha decay chain is clearer: From a heavy isotope of element 113, to isotopes of relatives Roentgenium (111); Meitnerium (109); Bohrium (107); Dubnium (105); Lawrencium (103); and Mendelevium (101).

A new paper describing this decay chain will be published in the Journal of the Physical Society of Japan.

Karol said the Dubna collaboration, involving Russian and American scientists, has also submitted results for review featuring a different isotope of 113. “Both groups do very
thorough and exacting work, but the JWP has not yet tackled the details with critical eyes,” Karol said.

The periodic table is almost full. During the past few years, teams in various countries have reported finding the final remaining elements: 113, 115, 117 and 118. As of June, the IUPAC was still evaluating claims for their discovery. No assignments have been made yet, but are being considered by a IUPAC and IUPAP Joint Working Party. If the IUPAC recognizes this discovery, the RIKEN team will get to name element 113.