International Scientists Race to Create the Heaviest Element in the Universe

Two international teams are competing to create the heaviest element in the universe. Super-heavy elements are the elements at the... 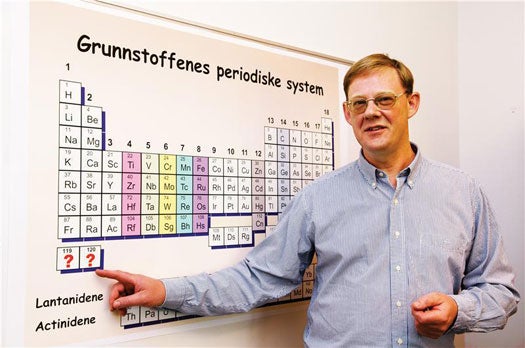 Two international teams are competing to create the heaviest element in the universe. Super-heavy elements are the elements at the bottom of the periodic table with an atomic number (the number of protons) above 104. The previous heaviest element, temporarily called ununoctium, was “discovered” in 2002, and the two teams are now attempting to produce elements 119 and 120.

Jon Petter Omtvedt, a professor of nuclear chemistry at University of Oslo, is working with scientists from Western Europe, Japan and the United States, running experiments at the German GSI Helmholtzzentrum für Schwerionenforschung. The other team is made up of Russian and American scientists working out of the Joint Institute for Nuclear Research in Dubna, Russia. “The competition is razor-sharp,” said Omtvedt. “Super-heavy elements are highly unstable and very difficult to create. It is like finding something unknown in outer space.”

Manufacturing a single atom of a new element is not sufficient to be credited with discovering a new element. The results need to be replicated. “No one will gain any recognition until another laboratory manages to recreate the experiment. In the worst case, it may take several decades before the experiment has been verified,” said Omtvedt. The heavier a super-heavy element is, the longer it takes to produce, and the shorter it will remain intact. A single atom of element 106 could be created within one hour when it was first discovered, and that atom decayers into lighter elements in 20 seconds. An atom of element 118 could be created in one month, and its half-life (the time before half of it decayed) was a mere 1.8 milliseconds.

Two weeks ago, nuclear physicists at Oak Ridge National Laboratory in Oak Ridge, Tennessee, created 20 mg of the highly radioactive element berkelium. Each team vying to create element 119 was given 10 mg of berkelium. They will bombard a metal plate laced with berkelium atoms with a beam of titanium atoms. The teams are working on a tight schedule. Berkelium’s half life is only 320 days, and once 320 days have passed, half of their sample will have decade into other elements. “It is extremely difficult to create intense titanium beams. To accomplish this, we have secrets that we will not share with others,” said Omtvedt.

The basic principle of creating super-heavy atoms is simple: smash the atoms of one element into those of another and their protons will add up to create a new element. Titanium’s 22 protons will join berkelium’s 97 to create an atom with 119 protons, one atom of element 119. Most of the time, though, the atoms will collide and shatter or partially destroy each other. But rarely, “less than once a month,” the protons will collide to create a complete atom. Detecting such a rare occurrence is a challenge. “You will have to detect this one atom on a metal plate where more than 100,000 superfluous events are occurring each second,” Omtvedt said. The only way to detect the new atom is to observe the radioactive radiation it emits when it decays. There will be no evidence of the new element until it’s already gone.

“We are working right at the cutting edge of what is experimentally possible,” said Omtvedt. “In order to study the heaviest elements, we have to stretch the current technology to its utmost and even a little further.”