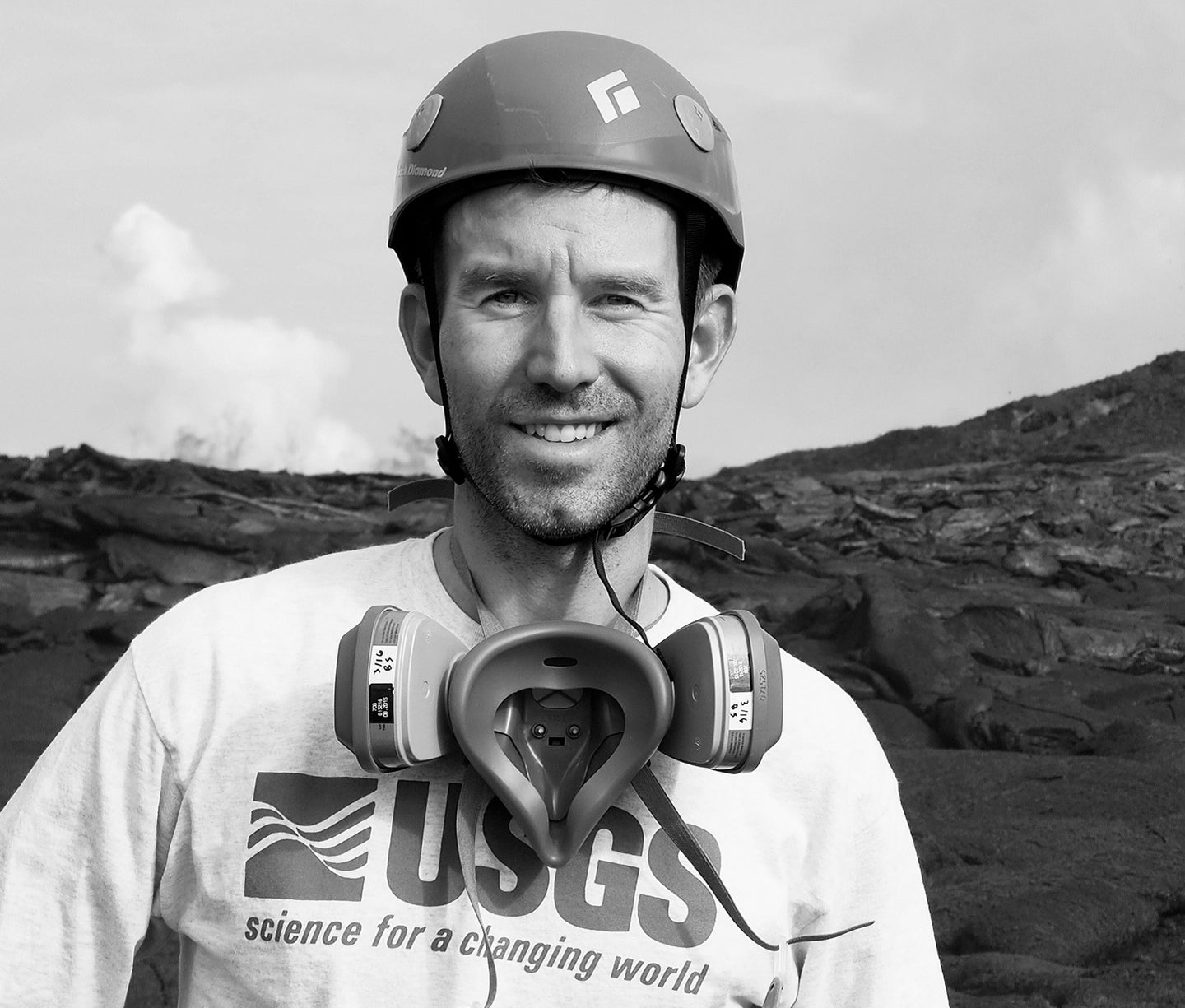 USGS geophysicist Brian Shiro was on the scene after Kīlauea’s Pu‘u‘ō‘ō volcano erupted in 2018. Courtesy of USGS

How to study a volcano when it destroys your lab

Dodging lava while broadcasting real-time data on an eruption is tricky, to say the least.

SINCE ITS FORMATION IN 1983, Kīlauea’s Pu‘u‘ō‘ō cone had risen and fallen as magma fluctuated throughout the volcano’s vibrant East Rift Zone. But on April 30, 2018, Pu‘u‘ō‘ō announced its retirement with a rumble. The once-brimming basin drained down into the earth like an unclogged sink. Newly liberated lava crept from the summit toward the Big Island’s eastern tip. Soon Leilani Estates, a community of around 2,000, would confront the eruption firsthand. Fissures exploded with ash, noxious gas, and molten lava across roads and into backyards. Pu‘u‘ō‘ō’s swan song ultimately destroyed some 700 homes.

Then the foundation of the Hawaiian Volcano Observatory (HVO)—​established by the US Geological Survey (USGS) in 1912—began to crack. On May 16 the staff was forced to evacuate. “We scattered to the winds and took what we could carry,” recalls Brian Shiro, who was then a geophysicist at the site. Shiro has always had a front-row seat in the rapidly changing field of hazard monitoring, but Kilauea presented the unique challenge of extracting real-time data from an uncontrollable force of nature. It taught him lessons he now applies to monitoring earthquakes as deputy director of the USGS Geologic Hazards Science Center in Golden, Colorado.

Shiro, who began his career as a tsunami researcher, settled in Hawaii in 2005. After a stint with the National Oceanic and Atmospheric Administration, he joined HVO in 2016 to apply his knowledge of seismic hazard monitoring to the complex world of volcanology. “These volcanoes are living, breathing things, and it’s exciting to have your finger on the pulse of the Earth,” he says.

As the 2018 cataclysm shook their facilities, Shiro and his colleagues engaged a remote monitoring system of GPS and seismic stations, cameras, drones, and other sensors to gather info. Dozens of devices were lost, damaged, or destroyed. Ash blanketed the solar charging panels of UV spectrometers meant to measure gas, rendering them inoperable for months.

Thankfully, the observatory had prepared for such obstacles years prior. “All of our stations talked to each other in a way that was easily configurable, allowing us to reroute a signal from one site to another without having to go there,” Shiro says. Throughout the eruption—which officially ended on September 5, 2018—he and USGS colleagues collaborated with emergency managers and public safety authorities and worked around the clock, publishing updates that empowered residents to plan their lives around a volcano’s whims.

[Related: Why can’t we just burn our trash in volcanoes?]

Despite their efforts, the effects of the eruption were widespread. Federal and county officials found that road repair costs would reach $82 million; local farmers suffered some $28 million in collective damages; and communities lost up to $94 million in tourism that year. Still, the work of HVO staff and other responders meant that no one died.

The event taught the USGS team how to handle a rapidly evolving crisis while simultaneously disseminating critical information to those affected, which Shiro believes will assist them in future eruption response efforts. Now, at the Geologic Hazards Science Center, he manages a group of scientists who keep tabs on earthquake hazards. Their work is central to populating the USGS website earthquake.​gov, which publishes current data to, in part, educate the public and reduce the potential for harm when the ground trembles. “It’s a new hazard for me, having come from tsunamis and then volcanoes,” says Shiro. “I’m checking off different hazards here.”