One Club to Rule Them All 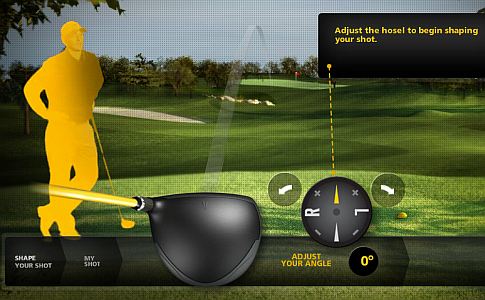 I’m not Tiger Woods. And, despite your Sunday red shirt and supermodel wife, you’re not either. So our likelihood of making single-degree adjustments to an already biomechanically unsightly swing in hopes of consciously creating a slight fade or draw is unlikely. The best we mere mortals should hope for is the ability to hit a ball straight, no matter how ugly the swing, 18 consecutive times off the tee. And now, thanks to an adjustable driver from Nike, technology will take care of the rest.

In the Tiger Woods video game, adding a slight draw or fade to your tee shot is a simple as clicking on the controller. Nike’s new driver is an attempt to provide the same simplicity to the real game at a cost of $550. The STR8-FIT, launched this month, allows hackers and scratchers alike to adjust their club head to one of eight different positions by varying the face angle (2° closed to 2° open), lie angle (58° to 62°) and effective loft (8.5° to 12.5°) by using a fancy torque-limiting wrench to adjust the head/shaft interface. You just worry about repeating the same swing and the club can adjust the fade, draw, and distance of your shot. As always, Nike marketing describes it perfectly: one club, one swing, eight shots.

According to Nike, pro players have traditionally made these adjustments before rounds by essentially building a new club in the Nike Tour Van based on the course, weather, and recent swing habits. Trevor Immelman won the 2008 Masters using a prototype version of the STR8-FIT that was adjusted to a one-degree closed face. This past weekend, he tied for 20th.

We feel obliged at this point to add the disclaimer that, according to golf rules, it’s illegal to adjust the club within a given round of golf. Rule 4-2a states, “… the playing characteristics of a club shall not be purposely changed by adjustment or any other means.” Nike is even concerned enough with the game’s integrity that they include this disclaimer, complete with an exclamation point, in the instruction manual. It’s also illegal, though, to kick the ball out of the bush and onto the fairway, so don’t get all judgmental.

First inspection of the STR8-FIT leaves one wondering if something is missing. The club shaft detaches easily from the head through a threaded locking nut. The shaft can then be rotated to one of eight positions where the shaft can drop back into the head and be locked down again. But what change can occur from rotating a cylindrical shaft about its axis? Upon more careful inspection, it’s noted that the shaft adapter on the end of the hosel is actually positioned two degrees off axis, providing eight unique head positions as the shaft is rotated. The included “key” to determine the club position is way too cryptic, but perhaps golfers are an especially intelligent crowd that enjoys symbolic puzzles.

A torque-limiting wrench drops into a custom connection on the locking nut (so leave the toolbox in the garage) and provides an audible (and startling) warning and visible light when the appropriate torque is reached. The torque required isn’t excessive, but does require a solid grip on the head (best, perhaps, to hold the club between your legs). A cylindrical grip ensures that the club feels the same in your hands no matter the position. We would recommend that future revisions allow the wrench to snap into the locking nut so it doesn’t slip off while being twisted. As expected Nike has an impressive interactive web demo showing how the club can shape an otherwise straight shot, or correct your seemingly incurable hook.

The shift to modular clubs might be here to stay, with the STR8-FIT following the Callaway I-Mix from last year which allowed different shaft and head combos to be used together. While our handicap isn’t low enough to say which is better, the Nike does require just one club, keeping costs down and your bag a bit lighter.