Games Without the Console 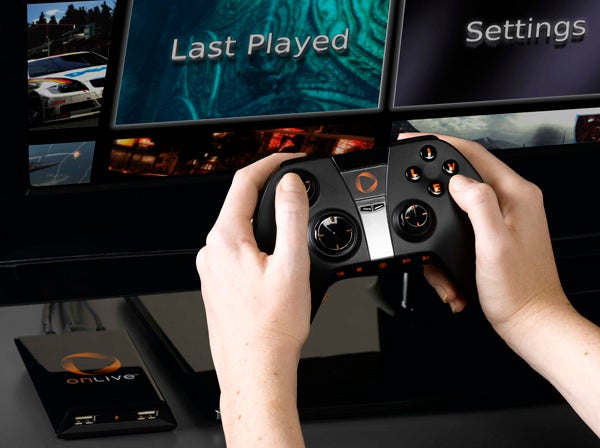 An Internet-connected adapter plugs you into games running on computers up to 1000 miles away. Courtesy OnLive
SHARE

Start buying your Mountain Dew in bulk: Later this year, the new OnLive Game Service will deliver digital fun directly to the TV, instantly. All you’ll need is the compact OnLive MicroConsole (not much bigger than an iPod), a wired or wireless controller and a broadband internet connection. Alternately, most PCs and Macs can run the games, using only a small browser plug-in that will be available from OnLive.com.

Since the heavy lifting is done by OnLive’s remote computers, a laptop or desktop powered by anything friskier than a hamster should be able to play even the most demanding titles: OnLive has inked deals with major publishers such as EA, Ubisoft, Take-Two Interactive, Warner Bros. Interactive Entertainment, THQ Inc., Epic Games, Eidos, Atari Interactive and Codemasters.

Online distribution should make gaming quick and easy, providing a portal to a variety of on-demand titles, solo or multiplayer options, different genres and skill levels. The platform also supports an online community, for de-rigueur social networking, in the living room or at the keyboard. You can even view live feeds of your buddies in the midst of gameplay. 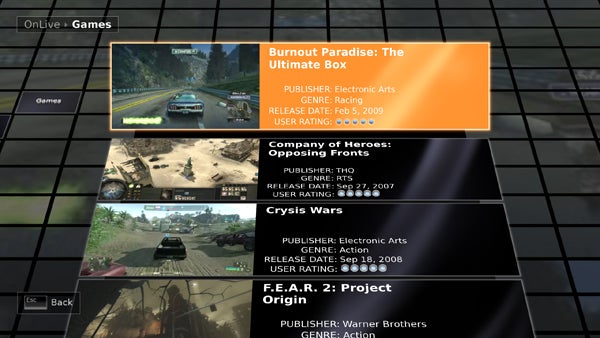 Seven years of stealth techno-tweaking have improved the user experience, notably reducing lag time to an imperceptible 80 milliseconds or less. So while the game is running on a server up to 1,000 miles away, you feel like it’s running on a computer in the same room with you. We played a round of Crysis with no perceptible lag time.

OnLive founder Steve Perlman, one of the minds behind QuickTime, developed new compression technology that he claims is far less data-intensive than anything else on the Net but allows fast action to appear smooth. Individual freeze frames might reveal skewed or missing data, he says, but OnLive drops bits in a way that isn’t perceptible in moving video. Typical home routers were also tested to ensure that data packets won’t be hassled by overprotective firewalls, reducing lag time. 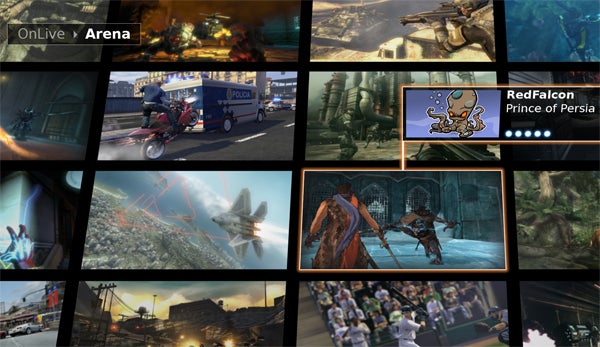 In the Arena, you can view other players who are online and drop into watch their games.

The Palo Alto, California-based OnLive has begun to show working demos of the service, including its compatibility with Epic Games’ Unreal Engine 3. Look for OnLive to ArRive this winter. Hardware prices and monthly subscription fees are yet to be announced, although they promise it will all be affordable–“less than what the average person spends on software and hardware (consoles) annually.”