Our latest online game puts lives in your hands. How good an engineer are you? 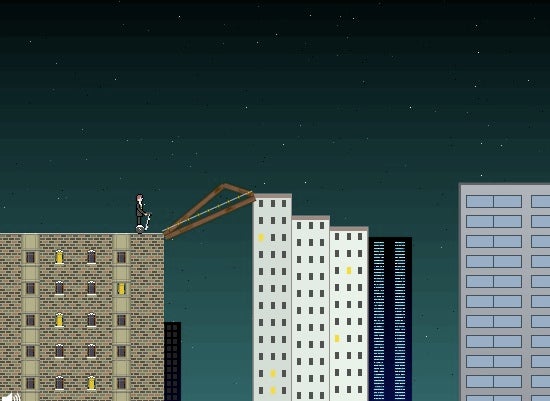 Here we have a fun and frustrating little game that exploits our engineering skills. How to build a stable bridge is what this game is all about. At each level of the game you’re given a limited amount of imaginary cash with which to purchase your beams and supports. It’s usually just enough to get the job done, if you do it right. Which isn’t so easy.

First of all, build a beam that spans the gap. However, unless the span is shorter than what we’re given in these simulations, the compression and tension forces will cause the beam to collapse under its own weight (causing all of the little cartoon people to heedlessly run headlong into the gaping chasm). So, in order to support the beam, the trick is to build a truss. The truss is a structure that helps support the weight of the beam by distributing the stresses throughout the truss supports.

To make an effective truss it’s crucial to build it in triangular structures. You can test this for yourself by building little model bridge support pieces out of popsicle sticks. Make some popsicle rectangles, and popsicle triangles. You’ll probably find that, of the two, it’s much harder to crack your triangles. Toothpick or popsicle-stick bridge building is a popular middle and high school science project, so anyone out there going for the record (or a good grade), remember those triangles.

In terms of basic physics, bridge building falls under the heading of “statics.” Just as it implies, statics is the physics of stationary objects. In order for an object (like a bridge) to be in “static equilibrium,” two conditions must be met. 1) The net force acting on the object must add to zero, and 2) the net torque must also be zero. If either of these conditions doesn’t hold up, then your object will accelerate, which is a really bad thing for a bridge to do. The trick is to arrange each piece of your bridge so that the forces and torques can balance without exceeding the strength of any individual piece.

Now go out there and build us a simulated bridge!