If we want bionic limbs that actually work, we might need smarter amputations

The process hasn't changed much since the Civil War. Prosthetic limbs are advancing in leaps and bounds. They’re becoming computerized, brain-controlled, and sensational. But as futuristic as these bionic limbs are, users often prefer simpler devices because the fancy ones are hard to control and they don’t provide enough feedback.

If you flex your wrist, even if your eyes are closed, you can feel where your wrist is and how fast you’re flexing it. And if you’re holding a barbell, you can feel how heavy it is. Someone with an artificial wrist can’t feel any of that—instead, she has to constantly keep an eye on her prosthetic to see what it’s doing.

“Those sensations are what we intend to provide back to people with limb amputation,” says Hugh Herr, who creates prosthetic limbs at MIT and wears two bionic legs himself.

Herr and his colleagues argue that part of the reason advanced prosthetics aren’t taking off is because amputation essentially hasn’t changed since the Civil War. In a new paper in Science Robotics, they’ve tested a new amputation procedure that may provide better control of advanced prostheses, as well as sensory feedback.

Typical amputations slice right through a patient’s nerves and muscles, leaving some extra muscle to tuck around the end of the limb for cushioning. Without any organs to stimulate, the severed nerves swell painfully. In addition, the arrangement weakens the electrical signals from the muscle, making it difficult to control some bionic limbs that take their orders from the body’s electrical circuitry.

Normally, muscles come in pairs that do opposite things. When you flex your biceps, for example, your triceps stretch. That stretching tricep automatically sends a signal back to your brain, telling you what’s happening in your arm. Amputation typically breaks up these muscle pairings, but Herr thinks that recreating them could make controlling a bionic limb feel more natural, and could give users a sense of their bionic limb’s position and movements without having to look at it. (That sense is called proprioception.)

To test out this idea, Herr and his team created artificial muscle pairings in seven rats. Taking two muscles whose nerves had been removed, they linked them together and grafted them into the rats’ legs. Then they took two nerves that normally flex and extend leg muscles, and attached one to each muscle graft. Later, when they stimulated one of the muscles to make it contract, measurements showed that the second muscle automatically sent out a signal to the brain as it stretched. The experiment showed that these artificial muscle pairings work similarly to the biological pairings. Plus, the muscles and nerves provided a strong enough electrical signal that it could potentially be used to control a prosthetic device.

To Herr, these results mean that the artificial muscle pairings might allow information to flow to and from a prosthetic limb. Electrical signals from the contracting muscle could tell the bionic limb what to do, while the stretching muscle tells the brain how the limb is moving, creating a sense of position. Electrical stimulation from the bionic limb to the muscle could provide additional feedback about where the limb is and what it’s feeling. That way, the arm can tell you if someone is shaking your artificial hand or how heavy a barbell in your grip is.

Each muscle pairing can only control one type of motion—for example, moving your forearm up and down for a handshake. Other, independent muscle pairings would be needed to flex each finger, or adjust your wrist. 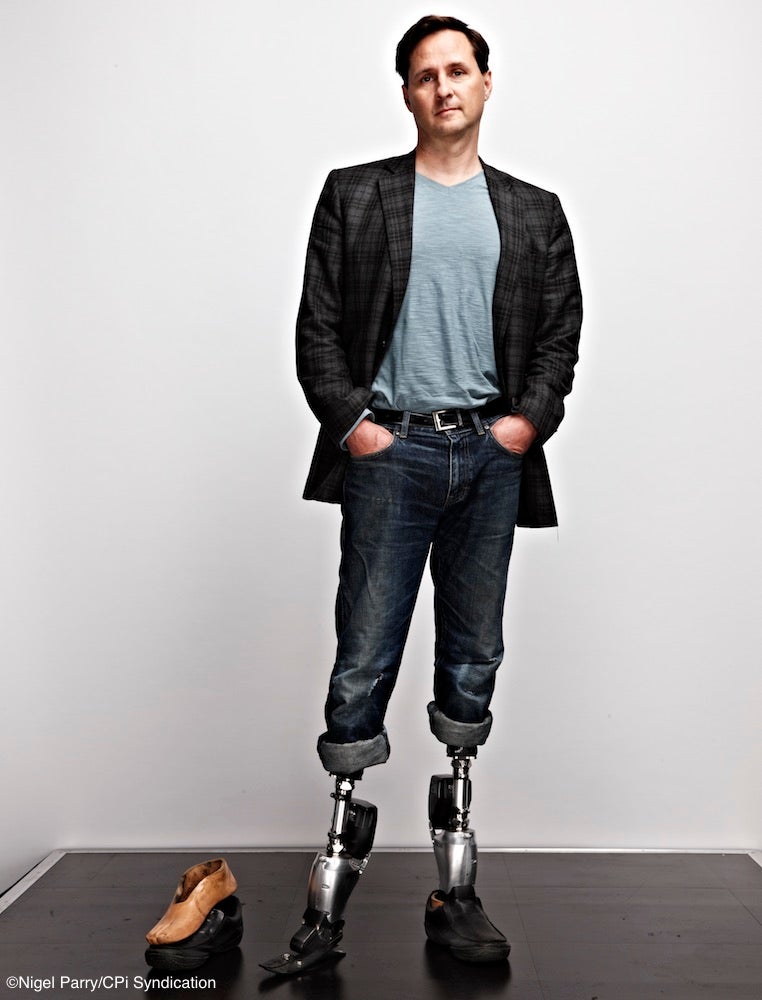 Some people with amputations may still have some of these natural muscle pairings in their residual limb. For others, the pairings could be reconstructed by taking muscles from other parts of the body and grafting them to the prosthetic attachment site, like Herr’s team did in this study. And for amputations that are planned in advance, the limb that’s being amputated can be an excellent source of muscles and nerves to help recreate the muscle pairings.

“In the past, the limb was amputated and cremated, and all those great tissues were thrown away,” says Herr. “Even in my case—both my legs are amputated below the knee, and my amputations were done 30-some years ago in a really silly way, in a conventional way—in principle we can do a revision on my limbs and get muscles from another part of my body and create these pairs.”

And in fact, that’s exactly what he plans to do. “We want to rapidly translate this to humans, and I personally want this done on my limbs,” says Herr. Currently he’s having his limbs imaged, developing a surgical plan, and waiting for approval from an ethical review board, but he thinks he could undergo the surgery “very soon.”

The procedure is considered low risk since it just involves rearranging tissues. If it doesn’t work, the results should be similar to a conventional amputation.

Another advantage, says Herr, is that the technique provides feedback to the user’s nerves via the muscles. “Muscles don’t mind getting touched by synthetic things, but nerves really complain. It doesn’t like it at all, and ends up rejecting it. Muscles are a lot less touchy.” The FDA has already approved other electrical devices that interface with muscles, so the team will face less of a hurdle there.

If it works, the amputation technique may provide more precise control and sensory feedback, which in turn can lead to better reflexes and a better user experience.

They still need to test it in humans, but the team is hopeful that their technique will help make bionic limbs feel and behave more like natural limbs.

Other researchers, who are putting wires into peoples’ nerves have to figure out what electrical patterns can recreate a sense of force, touch, position, speed. By contrast, says Herr, “we’re using the body’s natural sensors to create these sensations. We’re confident because of that, it’ll feel like position, it’ll feel like speed, it’ll feel like force.”