E=mc² became famous for all the wrong reasons

If a time traveler assassinated Albert Einstein before he figured out that E=mc², would we still have atomic weapons? 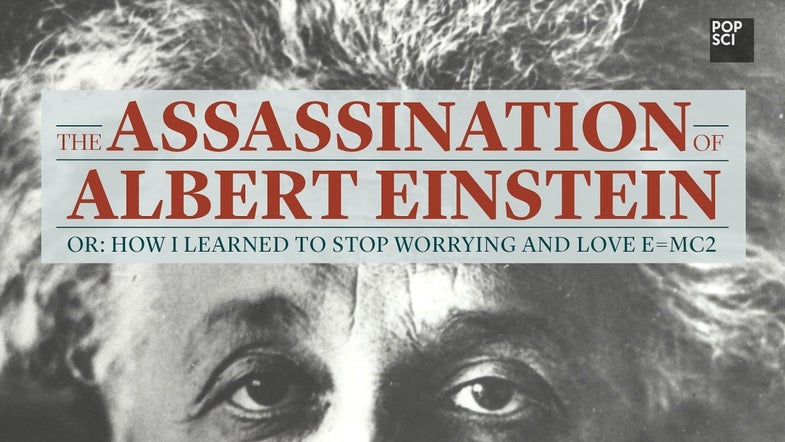 President: “Suppose I gave you a chance to prevent the destruction of our world, which took place 30 years ago.”

Yesterday, Popular Science received fragments of a conversation—a transmission from the future:

Doctor: “What is this task, Mr. President?”

President: “Quite simply, it is the murder of Albert Einstein.”

Doctor: “Are you insane?”

President: “In order to commit this murder, Doctor, you will have to travel back in time.”

OK…Maybe this isn’t a communique from the future. But, it was a possible future in 1957—at the height of the Cold War.

The science fiction radio show X-Minus-One posed a thought experiment: If a time traveler could assassinate Albert Einstein, could they stop a nuclear apocalypse?

The short answer is no. The slightly longer answer…

President: “Doctor, what would you say was the most important scientific discovery of the 20th century?”

President: “Exactly. This formula unlocked the atom. Without it there would have been no atomic energy. And consequently no bomb, no war.”

In popular culture, Einstein was associated directly with the atomic bomb. It’s a relationship that made E=mc2 the world’s most famous equation.

So what is E=mc2 anyways?

It’s simple on the surface, but says something fundamental about our universe—energy and mass are different forms of the same thing.

The equation first entered public consciousness when it was featured in the bestselling Smyth Report, an official history of the Manhattan Project, published just days after the bombings of Hiroshima and Nagasaki.

One year later, TIME called Einstein the “father of the bomb,” saying it was his equation (E=mc2) that made the atomic bomb theoretically possible.

It’s true Einstein signed his name to a 1939 letter urging President Roosevelt to fund research into atomic energy and weapons.

But it’s not really true E=mc2 made the atomic bomb possible. You don’t even need the equation to make the bomb. E=mc2 is more of a measuring tool than a building block.

It’s like this: Einstein didn’t invent a gun, he invented an equation that helped measure the explosive power of the bullet.

E=mc2 changed how humans perceive the universe. But the bomb is why the equation is remembered.

Man #1: Did you ever hear of a man named Einstein? Albert Einstein?”