This company wants to replace braille with a controversial new font 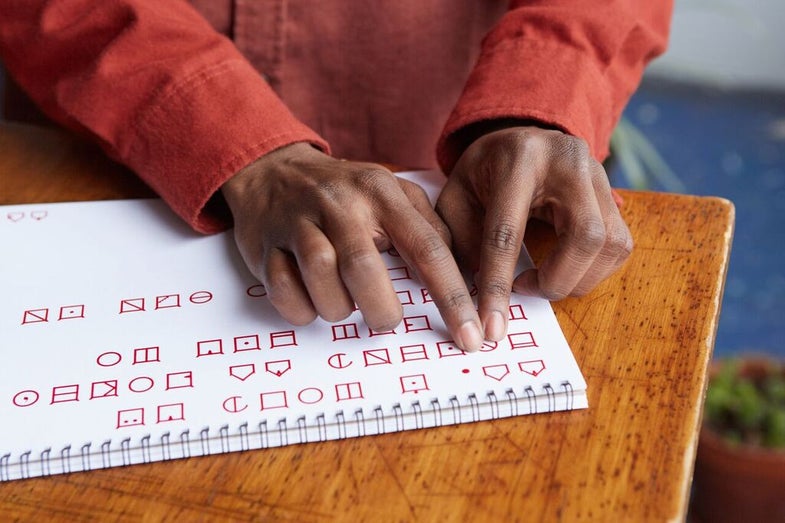 Learning to read and write was a challenge for Louis Braille. While many kids struggle to read, Braille was blinded at the age of three by an infection following an accident in his father’s leathering workshop. Unable to see words on the page, his best chance at literacy was at his fingertips—literally.

Frustrated by existing communication options (most blind people used the Haüy system, where Latin letters were embossed in paper), Braille set about developing his own tactile writing system when he was still a child. By the age of 15, he’d created a simple, efficient system of dots and spaces contained in compact cells that allowed a reader to comprehend each letter in a single touch.

Since its creation in 1829, braille has remained the predominant tactile communication system in the world. It’s been modified for dozens of languages and allowed countless people to read and write. But braille, which is read by fewer than 10 percent of blind or visually impaired people, is far from perfect. That’s why, almost 200 years after braille was created, Andrew Chepaitis decided to disrupt it.

Chepaitis is the president and CEO of ELIA. For almost 20 years, he and his colleagues have been developing a new tactile learning system that was more intuitive and accessible than braille.

“The reason Braille used dots was because the easiest way to create a tactile alphabet was to take the point of a pen and push into a piece of paper,” says Chepaitis. “That was great. That was a revolution.” But, he argues, technology has advanced beyond pen and paper, so tactile fonts should, too.

Chepaitis has thrown out braille’s dots in favor of a system of raised symbols form from curved and straight lines. Whereas braille was loosely based on a military code, ELIA mimics the shape of typical English characters wherever possible. An ELIA C looks almost identical to the C seen in the standard alphabet, except the ELIA C rises above the paper. But for a letter like W, which a tactile reader could trace in many directions (is it a V? Two Vs? One W?), ELIA has completely transformed the character. In the ELIA system, a W is a small box with a triangle wedge at the bottom, essentially a simplification of the switchback in a standard W.

After six years of sustained research,* ELIA launched its Kickstarter campaign on April 18 to bring attention to their work and raise funds to produce its tactile reading frames. The company also announced it would release a customized HP Inkjet printer for ELIA fonts this fall. A specialized HP Inkjet printer, the machine stimulates a chemical reaction that puffs up the paper in all the right places, allowing a blind reader to feel the letters on the page. With this new technology, Chepaitis hopes to rectify a number of the problems he sees with existing tactile codes.

While thousands of people say braille has changed their lives, on a purely statistical level, the code’s impact has been rather limited. Of the 8.4 million people in the United States with a visual impairment, only about 100,000 read braille. Those who are literate in braille are more likely to graduate high school and to secure employment. But the rest of the population continues to struggle.”Most of those who read braille were born blind,” Chepaitis says, “while 99 percent of people who are blind lose their vision later in life.”

Unfortunately, it’s harder to learn braille later. The National Federation of the Blind offers courses on braille and other tools for the visually impaired. Each course lasts six to nine months. In that time, the federation says, most people become comfortable using braille in their everyday life, but some will continue to struggle with speed and comprehension. And some never learn braille at all.

By building on the standard alphabet, ELIA hopes to meet people who go blind later in life where they’re at. “For them, they’ve invested years in learning the normal alphabet,” Chepaitis says. But the ELIA team has implemented other innovations in the hopes of making their alphabet easier to use, too. ELIA’s font is bigger than standard braille, because the company’s research suggested enhancing the size of the font even by a few millimeters increases reading speeds. The space between each letter is also expanded, again for clarity. These changes mean that, unlike braille, ELIA letters cannot always be read in a single swipe of the finger. But the company says that shouldn’t be a hindrance: the new tactile reading system can be learned in as little as three hours.

For all the sweat, tears, and special ink that have gone into ELIA, the system’s success isn’t guaranteed. “I’m not going to sugarcoat it: We are braille advocates in the National Federation of the Blind,” says Chris Danielsen, the federation’s director of public relations. While he thinks ELIA may prove helpful to some individuals, Danielsen remains skeptical of efforts to replace braille. ELIA argues its larger fonts and spacing are better for reading comprehension, but Danielsen contends one of braille’s best attributes is that each letter can be determined in a single touch.

There’s also the matter of accessibility when it comes to writing. Right now, people who rely on braille have roughly three options. They can write with an inexpensive stylus, which the federation sells them for just $10 a pop; lug around a six-keyed “brailler”, which is essentially a tactile typewriter; or invest in a specialized printer. ELIA’s own system is a specialized HP Inkjet printer, which debuts later this year. While Chepaitis is excited about the breakthrough design, Danielsen is worried about the price. A $10 stylus is more cost-effective than an inkjet printer, which currently retails around $200 in its standard form.

“I can only expect—and respect—people who disagree with us and argue this is not a worthwhile endeavor,” Chepaitis says. Still, he continues to believe ELIA’s potential for good dramatically outweighs the negatives. Chepaitis intends for the ELIA system will increase accessibility and reading speeds among users. He also hopes the printer, which took years of development on its own, to improve tactile photo printing. While braille can communicate some of the contours of an image, like the details of a map, ELIA’s puff ink may have more success. If all goes well kids with visual impairments wouldn’t just read the words in their textbooks—they’d get to feel charts, diagrams, and illustrations.

Most of all, Chepaitis sees ELIA as a way of bringing families together. Even if a person with severe visual impairments learns braille, their sighted family members continue to struggle to learn and communicate with them. Because ELIA is based on a standard English alphabet, it can be read both with the fingers and with the eyes. As a result, the company says it’s even easier for sighted people to learn than for the visually impaired. “[If] your mom is losing her vision, and she puts the labels on her canned goods, you can read them, too,” Chepaitis says.

Whatever becomes of ELIA, one thing seems certain: Braille probably wouldn’t have minded the friendly competition. He once said, “Access to communication in the widest sense is access to knowledge.” For all the resistance it’s received, ELIA is nothing if not a widening of the communication options for the blind and visually impaired.

**This section was updated for clarity.*