This boxy model is versatile and perfect for a van-life build. 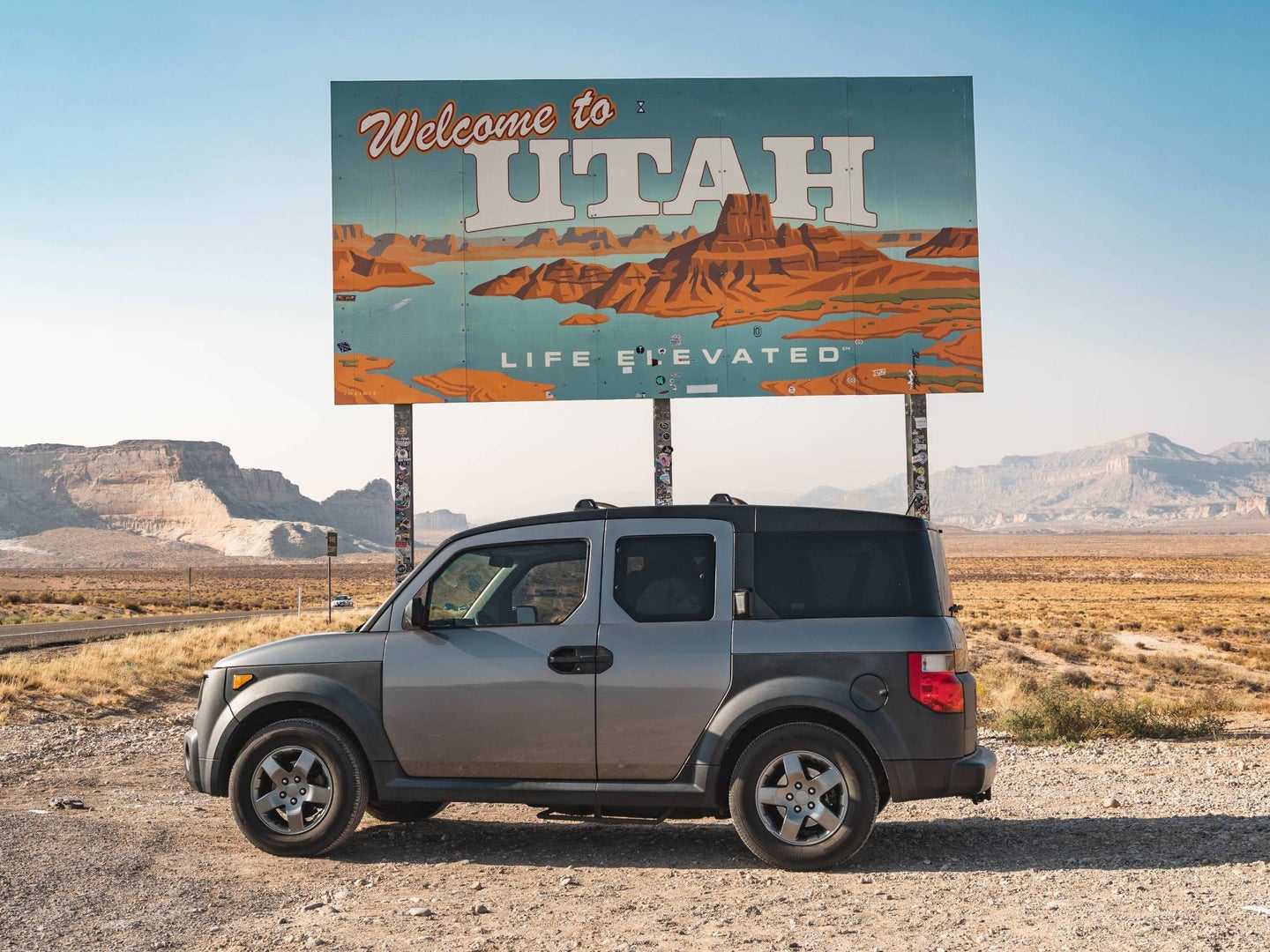 This four-wheeled box can get you far. Jimmy Conover / Unsplash
SHARE

They’re everywhere: small, boxy SUVs in tangerine, burgundy, kiwi, alabaster, and a smattering of other colors. They look more cute than cool, and you’ll see them in all manner of conditions, from near-mint to rough and road-worn. I’m talking about the Honda Element, which has emerged as a surprise standout among the van-life crowd.

Generally speaking, the Element has grown in popularity in recent years thanks largely to its solid reliability and versatility. Van-lifers have latched on to it, and if you get your hands on one of these vehicles, you can easily convert it for life on the road.

Why the Honda Element is so popular among van-lifers

When Honda introduced the Element in 2003, no one foresaw what people would really use it for. While this SUV was originally intended for young, active Millennials, it ended up being the go-to vehicle for retirees with an eye for easy access (thanks to the Element’s expansive suicide doors), and low ground clearance.

[Related: A beginner’s guide to choosing the perfect van-life vehicle]

While the Element was discontinued in 2011, its renewed popularity has fueled speculation about a reintroduction of the model. So far, this is only a rumor, so the only place you can expect to find one for sale is in the used section of the paper. Luckily, grandpas tend to take great care of their cars, and as a result, they’ve passed down a fleet of largely pristine, single-owner SUVs that have found an eager market in van-lifers.

Today the price of a mid-range condition 2007 Honda Element can easily run upwards of $10,000—that’s more than double what I paid for mine just two years ago. If you do spot one for sale at a reasonable price, snatch it up. And if you need a reason, we’ll give you three.

The Honda Element is like an ocelot: it looks adorable but is still incredibly powerful. Even converted and fully loaded, mine will charge over a mountain pass with surprising gusto. Many versions boast surefooted all-wheel drive capable of traversing surfaces slicked by rain, snow, or ice, or even bounding over the sands and uncertain hardpan of Moab, Utah. And for a boxy body, they have unusually solid handling.

This SUV also has decent fuel efficiency. At roughly 23 miles per gallon depending on the specific model or trim, it burns through less gas than larger, heavier vans or RVs. The Ford Transit, for example, clocks in at around 26 mpg, while an RV can easily guzzle gas at a dismal 10 miles mpg.

If the Element has one major downside in regards to its capabilities, it’s the low ground clearance. Surefooted as it is, it simply isn’t high enough to clear large protrusions or high-center dirt roads. But beyond that, it’s got surprising derring-do.

If I had a dollar for every time I heard someone say, “Those little Honda VTEC engines will go forever,” I could afford another Element. Honda has a good track record for reliability, and the Element is a good example of that.

In the two years that I’ve had mine I’ve driven it all over the United States, down to Mexico City, then all the way up to Banff, in Canada. Besides regular maintenance, the only repair I needed to do in all those miles was a new ignition switch and a couple of sway bar bushings.

The Element is ideal for conversion

It’s hard to find the perfect vehicle to convert when you’re on a budget, so you usually end up compromising. While theoretically solid van-life options due to their cargo capacity and driving capabilities, SUVs, in particular, tend to be challenging to convert simply because the interior isn’t the right shape for it. This is not the case with the Element, which is essentially a big, empty box when you remove the rear seats.

The biggest compromise you make with the Element involves size—it certainly isn’t huge. But van-lifers have found all manner of creative ways to make the most of its boxy space.

How to convert a Honda Element for van life

If you get your hands on a Honda Element, the first journey you’ll enjoy together is that of converting the vehicle into the perfect van-life home. Many people have trodden this road before, so you can learn a thing or two to make the most out of your boxy SUV.

Take out the seats—and use the connection points

One of the coolest features of the Element is its rear seats, which not only fold flat but can also fold into the sidewalls to make more cargo space. And if that isn’t enough, you can remove them altogether at the press of a lever.

You’re going to want to remove the seats, but also make use of the connection points to add stability to your platform or conversion. These are rock solid and offer the perfect place to plant your bed or load-bearing points in your build.

The Element certainly isn’t a long vehicle, and its front seats don’t slide nor lean forward very much. As a result, the tallest you can be if you expect to sleep stretched out between the rear door and the front seats is about 5 feet, 7 inches. If you’re like me, that doesn’t cut it.

First of all, you’ll likely have the front seats pushed back when driving so you and your co-pilot can sit in comfort. That means you’ll need to make an insert to extend your bed to its full length once the seats are slid all the way forward. I built a 6-inch-wide insert on a pair of legs, and I’ve seen other Element owners use an extension that folds out with a hinge.

Even extended, most people will want or need more legroom. I designed my first Element conversion to have enough room if I slept at an angle. For my second, I designed the build for two people, which makes sleeping at an angle impossible. This is why I have an extension that runs between the front seats where I rest my feet.

Originally intended for outdoor enthusiasts, the Element was designed with an interior that you can safely spray down with a hose. This is incredibly helpful when it comes to keeping your conversion clean. It’s worth noting that some owners have noticed a “wet dog” smell after wetting the seats. While I personally haven’t had that issue after many washes, it’s best to avoid drenching the upholstery and to do all your cleaning on hot, dry days when you can keep your vehicle’s doors fully open so the interior can dry completely. Also, avoid getting water into any crevices, which might be direct routes to the Element’s sensitive electrical components.

If you want to be able to keep cleaning the inside of your SUV thoroughly, don’t forget about adapting your build for it. That means leaving access to the floor and lower sidewalls and maintaining floor access at the rear where water can run out. After a few months on the road, this makes it easy to give the interior a good scrub-down.

Do your research and get creative

YouTube is rife with examples of great Element builds. I’m a big fan of this slatted bed with desk design (full schematics included) by Amy Makes Stuff. Youtuber Sage Roddy really nailed it in terms of compartmentalized cabinets, and Curiosityness has great ideas to maximize bed space while building in plenty of gear organization. Watch a bunch of examples of what others have done before, steal the ideas that jump out at you, and find creative ways to tailor them to your specific needs.

I write for a living, so a desk was essential. I solved this by buying an actual desk from a second-hand store, then cutting it to fit my space. This also saved on lumber costs. That’s really half the fun of the whole van-life thing: It’s your opportunity to pull out your tools and build something functional. Part travel lifestyle, it’s also a big, ongoing DIY project.

Update: This post has been updated to include some drivers’ anecdotal experiences with a “wet dog” smell after rinsing the inside of their Element.