If you haven’t started preparing yet. 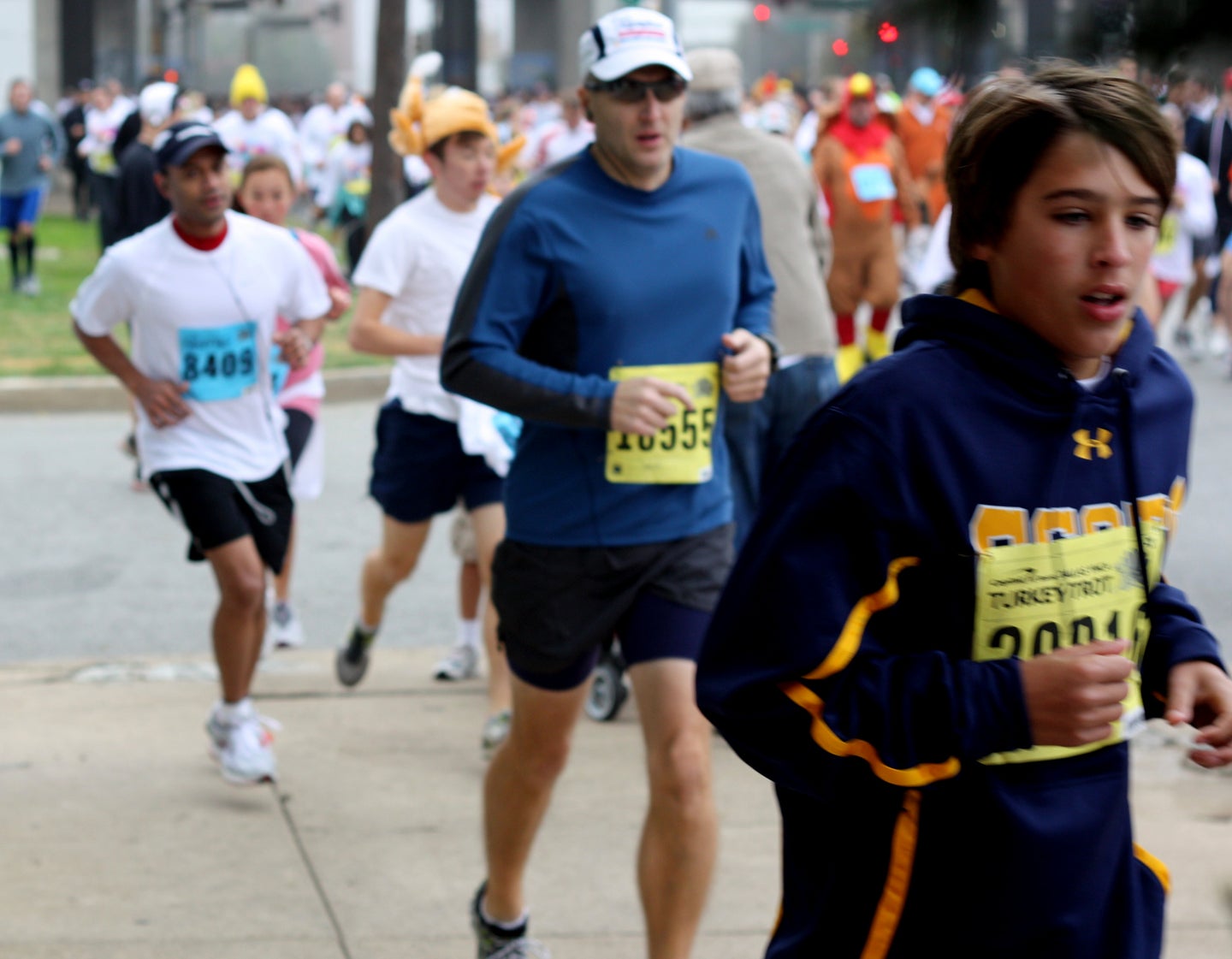 This post has been updated. It was originally published on November 18, 2019.

Indulging in a delicious, home-cooked meal is arguably the best part of Thanksgiving. Arguably. In my opinion, a day of relaxation, merriment, and delicious grub isn’t complete without some amount of strenuous physical activity. Luckily for me, there are many others who share my sentiments.

Over the past decade or so, Thanksgiving Day road races—colloquially known as Turkey Trots—have become increasingly popular. They’re a great way to squeeze in some exercise early in the day so you won’t feel so bad later, while you’re stuffing yourself full of dinner and pie and then holding your stomach on the couch for hours. As an added benefit, if you come from a competitive family, this is a much better way to indulge in friendly rivalry than the traditional backyard football game, which is far more likely to result in bruises and broken noses.

If that doesn’t convince you, research shows that running prompts a flood of endorphins in the brain. These chemicals can create a feeling of euphoria, known as the “runner’s high.” If you’re dreading Thanksgiving with your cantankerous relatives, a pre-meal run could get you through the day.

So how does one dominate a Turkey Trot? Luckily, the courses are typically short—usually 5K (3.1 miles)—so you won’t require much training. But you still shouldn’t jump in without at least some light preparation; you don’t want to spend the big meal nursing a pulled muscle or other injury. Your preparation should really have started a couple weeks ago, but even if you’re only beginning to practice now, you can improve your race-day experience.

How you should prepare will depend on two factors: What physical shape you are currently in and how well you want to do in the race. A balance of these two elements will help you figure out how much to push yourself. Here’s a last-ditch guide to Turkey Trot success.

For those who can’t remember the last time they ran

Because Turkey Trots are typically 5K races, even complete novices can participate. While some longer Trots exist—up to half-marathon lengths—people who haven’t run in a while should avoid signing up for them. In general, the shorter the race, the better off you will be.

That’s because it takes quite some time to build up your muscles and your cardiovascular capacity (how efficiently your body pumps oxygen to your muscles). If you actually plan to go all-out, reconsider: Many training plans, like this one, recommend up to eight weeks for a beginner to prep for a 5K race. Without this practice, you risk an injury by overworking unprepared muscles and you increase the likelihood of DOMS, or delayed onset muscle soreness. It’s that muscle pain that makes you almost physically unable to get out of bed the next morning. So if you haven’t done any prepping yet, slow and steady is probably best.

Good news: If you don’t care about your time, then you also probably don’t need a strenuous training plan. On the day of the race, just go at a steady pace that is comfortable to you—alternating running and walking is completely acceptable—and remember not to overdo it.

While you might feel fine for the rest of Thanksgiving Day, too much exertion at the Turkey Trot risks ruining your Black Friday plans with muscle pains. And the adverse effects can start sooner than that: If you aren’t used to distance running (and even if you are), you might be prone to runner’s trots, that frustrating bowel distress that often accompanies higher-mileage runs. You don’t want to finish a Turkey Trot only to spend the rest of the day in the bathroom.

If you can run a mile or two without feeling like you might die, you should be in pretty good shape for any race that lasts between one and five miles. Anything beyond that probably requires some additional training. For now, check this eight-week intermediate training plan to see which week sounds doable for you. Then go ahead and start following the regimen. Over this next week and a half, a regular running practice should maintain the shape you are in and even slightly increase your performance.

For daily runners with some type of training plan

You know your own body, and completing the race shouldn’t be a problem. Instead, you can push yourself to reach a goal time. In the days remaining, try to do at least one or two runs that are longer than the course you plan to follow on Thanksgiving Day.

However, don’t necessarily assume you should push yourself as far as possible. Remember, you don’t want to be feeling too much pain when pie time rolls around, or on the following day. Besides, with so many road races throughout the year, you don’t have to hit a personal record at your Turkey Trot.

You probably have a coach and do not need my non-elite runner’s help.

The day of the race, save your big meal for after your run. Eat a small breakfast with some carbs like a banana, oatmeal, or half a bagel with some peanut butter. And feel free to dress up in whatever turkey-related costume you desire. Remember, this particular outing should be even more fun than your typical road race. Once the run is over, you’ll enjoy your festive meal even more. Just remember to wash down the stuffing with plenty of water.