Turn your backyard into an awesome hangout for bats

Help a bat out, get some spooky cred in return. 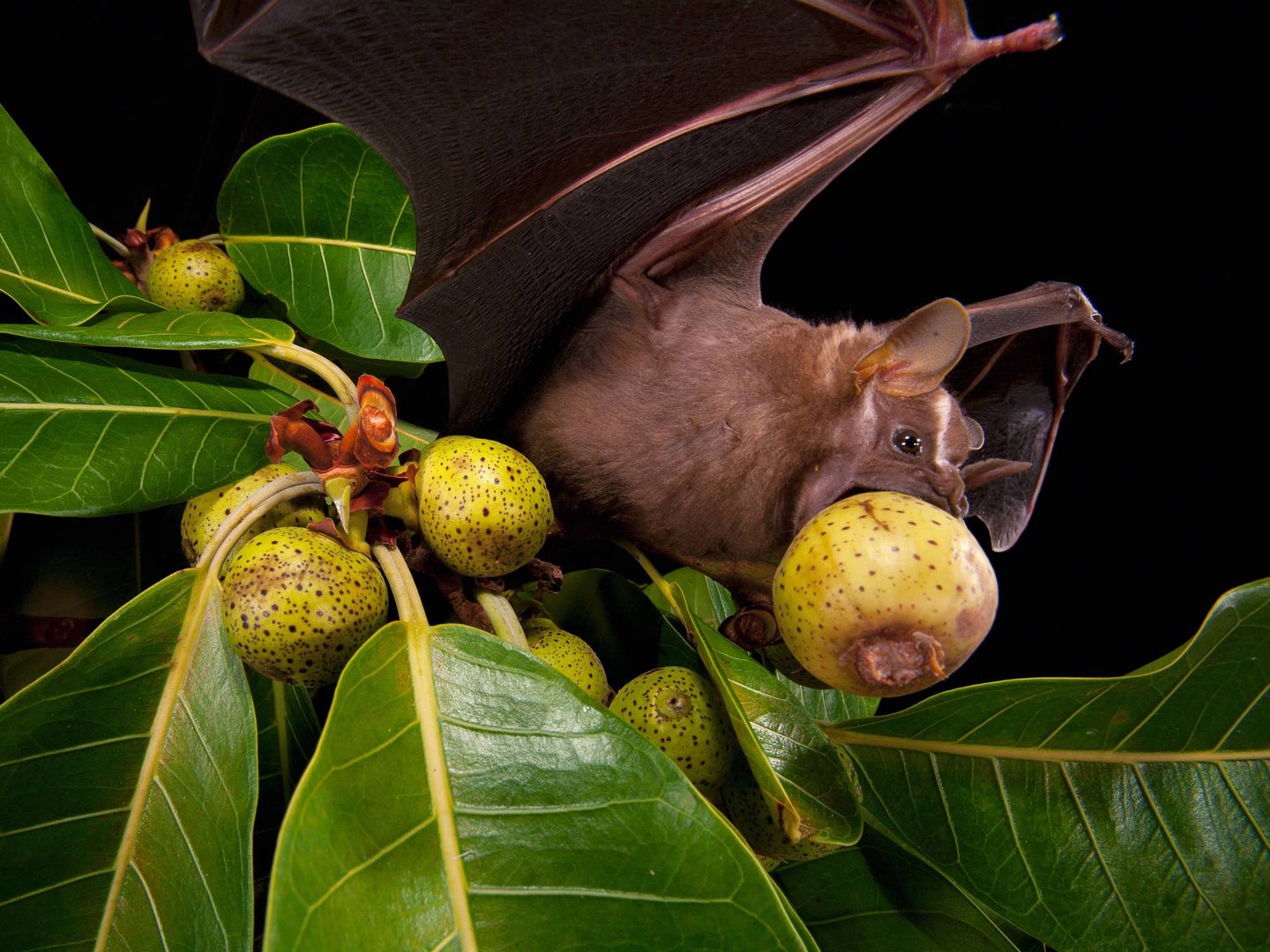 The eerie air of autumn has arrived, and bats are everywhere. At the store, you’ll find decor featuring dark flying creatures with razor-sharp fangs ready to suck human blood. But outside, resting in trees and darting across the sky, you’ll see the real thing.

These creatures are vital to the function of our ecosystems, which is why this fall, you should make your outdoor spaces a better place for them, and ditch the plastic blood-sucking decor for the real deal. You’ll be showing your appreciation for everything bats do, while also scaring the socks off the kids in your neighborhood—it’s a win-win.

Their association with diseases like rabies and COVID-19 has put a dark stigma on bats that’s hard to shake off. Because it’s true—bats do carry diseases, but these winged fellows can only transmit them to humans through direct contact, like when their saliva hits open wounds. This is an exacerbated risk because of human encroachment into bat habitat: Our close presence makes contact between our species inevitable and even forces these furry flyers to defend themselves against people they would otherwise avoid.

Kristen Lear, conservationist and manager at Bat Conservation International, an organization that aims to end the extinction of bat species worldwide, explains that we should treat bats just like any other wild animal out there, and be aware of the dangers they pose as such.

“You don’t want to go cuddle a bat, just like you wouldn’t go up to a wild fox and cuddle it. If we respect the boundaries that we have, we can all live together perfectly fine and benefit each other,” says Lear.

Respecting their habitat allows bats to thrive and play their role in our local environments, which includes helping with insect population control, producing one of the world’s best fertilizers, and in some cases, pollinating plants.

And if that’s not enough to celebrate bats, keep in mind that they’re also incredible echolocators, the fastest animal flyers in the world, invaluable assets to tequila production, and very smart.

“Way smarter than they should be for the size of their brain,” says Cory Holliday, a conservation biologist for the Nature Conservancy, a global environmental non-profit.

Unfortunately, bats are dying, and they’re doing so at tremendous rates. Fear mongering has driven people to take on these flying mammals in great numbers, while the hibernation-disrupting  white-nose syndrome has wiped out 90 percent of some bat species in the United States. And then there’s habitat loss—the biggest threat to bats worldwide.

Bats deserve a lot more respect and care than we give them. If you want to revert that, here’s what you can do to help while getting some spooky cred just in time for Halloween.

The vast majority of bats in the US feast on insects, so the best way to provide food for them is to lure bugs into your backyard by planting native vegetation.

“[These gardens] create shared landscapes of native organisms from every level: bacteria, fungus, insects, plants, up to vertebrates like bats and birds,” says Holliday. “They are the foundation that’s going to support that diversity that we take for granted in the United States.”

And if you want to take it up a notch, Lear says night-blooming natives are even better. The flowers in these so-called moon gardens will attract nocturnal insects, creating a late-night buffet for hungry bats.

To find plants native to your area, you can visit your local plant nursery, conservancies, and botanical gardens. Those places are usually filled with specialized people who can answer your questions and give you ideas for your own backyard. You can also use online databases like the Lady Bird Johnson Wildflower Center, or the National Wildlife Federation.

Studies have shown that pesticides have the power to kill animals as large as mountain lions, so it’s no surprise that bats are also vulnerable to them.

“As bats are flying around eating insects, they can really get a high level of chemicals in their systems that can be detrimental,” says Holliday.

And even in cases where they are not fatal, a 2019 study published in the Brazilian Journal of Biology found that pesticides can negatively affect a bat’s reproductive system, decrease energy levels, and disrupt hibernation patterns. The latter is especially bad as it exacerbates the harm caused by white-nose syndrome.

But with bats around, you don’t have to worry as much about insect mitigation: they’re an efficient and natural way to reduce pest insects, eating thousands of them each night. Plus, you’ll be able to foster a healthier environment for you, your plants, and also bats by curtailing your chemical pesticide use.

Over half of bat species in the US roost in dead trees or snags, crawling under peeling bark to keep safe.

In some cases, snags can be home to hundreds of bats, so leaving dead trees standing, when safe to do so, can provide great shelter for these flying mammals. Just make sure that large branches or the trunk itself are in no danger of imminently collapsing over any construction or a high-traffic area.

A general rule, Lear says, is to “keep things as natural as possible,” including leaving these trees to home wildlife until they eventually fall and decompose on the ground. When that happens, bats can continue to feast on insects that take up residence in the decaying wood.

If you have no option but to cut down that dead tree in your backyard, bat houses can give night flyers a roosting location that can be even better than decaying wood, as they’ll last longer.

“Bat houses can be a really great benefit. They’re not only good, optimal habitat, but they’re reliable, and bats can come back year after year,” says Holliday.

You can buy bat houses or build your own at home, but just as with your own place, location is paramount. You’ll need to install the bat house 12 to 20 feet above the ground and allow it to have 20 to 30 feet of flying room around it. And even in the warmest climates, you’ll need to make sure it receives at least six hours of direct sun daily, preferably at least 10 hours in higher latitudes. Bonus points if you can find a spot with all these features that is also close to a body of water, ideally at a place with enough room to swiftly swoop down for a drink without running into something—a pond or a long trough will do. After all, if you traveled miles every night just to get a snack, you’d probably be a bit thirsty, too.

Because excess heat inside their box can result in bats dying, one of the keys to bat house success is temperature regulation. Southward orientation will ensure the enclave doesn’t get too much direct sunlight, and the proper color (depending on your location) will help with temperature balance—in general, avoid dark colors, as they retain heat for longer. Bat Conservation International has a detailed handbook on proper bat house parameters, as well as several free floor plans.

To make bat houses even more attractive, Lear says you can plant native night bloomers directly below them. As the bats poop from above, they will fertilize the plants and create a mutually beneficial system of fertilization and growth. If you have pets, you can also put a small fence around this garden to keep dogs and cats from preying on your new backyard friends.

If conditions are ideal enough, bat houses may also provide a way to relocate unwanted bats roosting in your own home.

“Sometimes bats do get in places where you don’t necessarily want them,” says Holliday.

In situations like that, he explains, you should contact a state wildlife biologist to come to your home and check on your guests just to make sure they’re not a rare species we should protect. If that’s not the case, Holliday says to leave them be and manage the situation in the cold months when they’re gone.

But above all, never try to disturb or remove the bats yourself, as you risk getting scratched or bitten as a result.

Turn off the lights

You might have seen bats flying back and forth, briefly illuminated by the glow of a street light to catch the bugs that swarm around them. While some bats have learned that lamps can be an easy place to hunt, predators, such as owls, have too.

“It’s not worth it to keep lights on just because insects can be attracted to them. If you think about the natural ecosystem, what’s naturally out there? Lamps are not,” says Lear.

Following the rule of thumb of remaining as natural as possible, turning off outdoor lights at night helps keep bats safe and have undisrupted hunting patterns.

Be an advocate for bats

Above all, the best way to make your yard and the rest of the world a better place for bats is to learn about them and tell others. You can also get involved in initiatives like International Bat Week to spread awareness.

As more people learn about the incredible feats of bats and the dangers they face with habitat loss and white-nose syndrome, you’ll help break the stigma around them so that they can be appreciated for being the incredible, docile creatures they are.

“People are really starting to understand how cool and important they are. Seeing that shift is really heartening,” Lear says.