Danh Trinh built StorageBot to keep track of easily lost workshop parts. Even better, it responds to the sound of his voice. 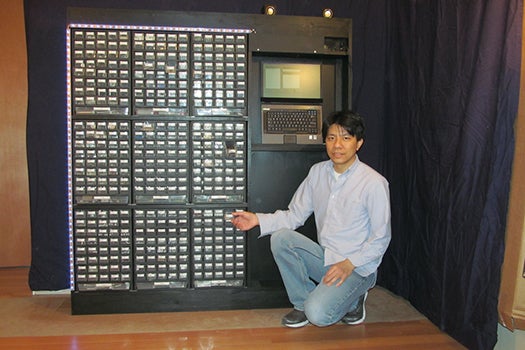 Over 25 years, Danh Trinh had amassed thousands of screws, hinges, and other parts in his workshop. He filed them away in labeled drawers, but locating them still wasn’t easy. To solve that problem, he built StorageBot: a robotic organizer that summons components at the sound of his voice. Trinh first crafted a wooden cabinet to stack nine plastic storage boxes—each holding 40 drawers—into a grid. Then he installed stepper motors and pulleys to move behind the shelf along two axes. They connect to a rack-and-pinion system that pushes the drawers open. When a laptop recognizes a voice command, it feeds the data to an Arduino microcontroller, which operates the drawer-opening system and a border of LEDs. “The LEDs indicate the row and column of the drawer that is about to open,” Trinh says. Now if he needs a hinge, he doesn’t have to halt a project to get one. “Anything that breaks away from your brainstorming impedes your train of thought.”