Reportedly, the wooden copter can soar up to 2,600 feet, but the Chinese government has grounded it for safety reasons 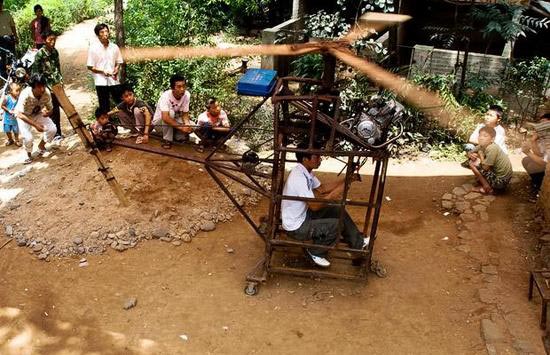 A farmer cares to bet his life on his DIY copter, but the Chinese government says no.

Anyone who dares to build a helicopter with wooden blades, a steel-pipe-reinforced frame, and a motorcycle engine deserves to go up in the thing. But the Chinese government has forbidden farmer Wu Zhongyuan from even attempting a test flight. We just want to see if the crazy contraption can fly.

Granted, Chinese locals have history of bold DIY inventions ranging from homemade robots to DIY gyrocopters and airplanes. Many of these emerged from the “shanzhai” movement, which celebrates both homemade ingenuity and knockoffs.

On the higher end, some well-engineered knockoffs can even successfully riff on the iPhone and other high-tech products, although counterfeits can raise safety issues for Chinese consumers.

Wu says that he built the copter based on middle-school physics, and all for a sum of $1,600. If the copter truly works and isn’t just a hoax, he claims that the invention can get him as high as 2,600 feet.

What do you think? Is that a viable flying machine or a pretty model?

He’s not alone among China’s DIY flyers, if these videos are any indication.

[via DVICE, Ananova and Automotto]