A Scientific Approach to Dessert 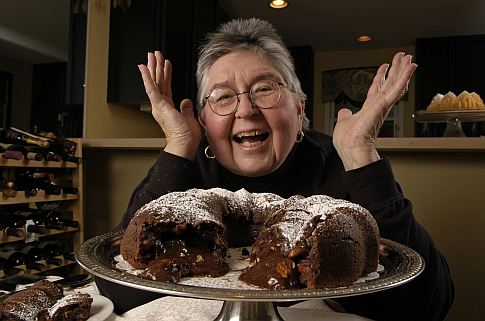 Part of the allure — and possibly the downfall — of the trend toward science-based cooking is the promise of perfection. Harold McGee, the Cook’s Illustrated magazines and America’s Test Kitchen, Alton Brown’s books and series, PopSci‘s own Ted Allen — all suggest that by following certain simple rules, measuring carefully and understanding the way ingredients behave, the home baker or cook can produce a superior dish.

BakeWise, by former research biochemist Shirley Corriher, is one of the latest entries in this field, and, despite some home-run recipes, the book is more valuable as a highly readable baking textbook than as a cookbook. It provides a fascinating explanation of how component parts come together in the baking process, particularly how variables such as protein level in flours affect the process and the final product. Here I’d always thought that self-rising flour was for wimps who couldn’t be bothered to measure a few more ingredients; Corriher explains that flour companies use different leaveners than those available in the average supermarket, producing a more efficient rise and a better product.

The book is organized into five chapters — cakes, muffins and quick breads; steam-leavened goods; pies; cookies; and breads — and there’s a wide variety of recipes within each chapter. There’s also an introduction, with some of the basic baking information that many of us don’t even realize we don’t know — such as how most ovens regulate temperature. Each chapter also starts with an overview on ingredients, structure, and technique.

Before each recipe is a callout box with an itemized list of “what this recipe shows”: things like “using a little whipped cream in a cake lightens the texture, adds moisture, and produces a wonderful flavor.” and “superfine sugar dissolves fast and makes excellent meringues.” There are tables throughout breaking down all kinds of information from starches to sugars.

For a practiced baker, much of the information will prompt “a-ha” moments, as you read an explanation for phenomena that you’ve witnessed in the mixing bowl or the oven, or tasted in the final product.

Corriher breaks down how the ingredients interact, explaining why just the right amount of things like leaveners, protein, or fats are key. “If baking soda is combined with an acid, carbon dioxide gas is produced much faster, and only a small amount of a milder-tasting salt is left behind,” she writes, in explaining how to avoid “an unpleasant soapy taste” that can be produced by baking sodium. Much of baking is about precision, and Corriher helps the reader understand why. “If you overbeat egg foams you tighten the bonds between the proteins so that the lining of each bubble is firmly bonded … The bubbles cannot expand when you bake the product and your soufflé or cake will have a poor rise.”

Sometimes, though, the science seems a bit unnecessary. There’s an extensive section on the mathematical formula for checking in advance if you’ll have a successful cake. It’s interesting to understand that there are some basic underpinnings that support many recipes, and that could be fun for people who like word-based math problems. I took a very nice cake recipe that I have (from a different book) and checked it against this formula. Yes, according to the math, it would be a good cake, but I already knew that. Am I going to run each cake recipe I want to make past this check? Not likely — I’m going to select recipes that look good as I eyeball them, and come from trusted sources. Again, it’s neat — but more interesting than useful on a regular basis.

There is a lot of repetition of information throughout the book — but this takes into account the way most people are going to use a cookbook, as Corriher notes. Relevant information is right above each recipe, or there’s a reference to another page to read.

A few recipes — such as the éclairs — were delicious, but not significantly better than or different from other, similar recipes I’ve tried. Others, though, were absolute standouts: “Chocolate Pecan Torte with a Hint of Bourbon” was delicious, a rich but not-too-heavy chocolate-nut cake, although I tasted nary a soupçon, much less a hint, of bourbon. Definitely serve it with the sweetened whipped cream, as suggested. “Shirley’s Corrupted Black Gold” cookies and the “Roasted Pecan Chocolate Chip Cookies” are two of the best cookie recipes I’ve tried in my life, and will be my new standbys. Both literally got gobbled down in minutes by friends.

But that leads me to one of the stranger features of the book: it seems, at times, as though somebody forgot to edit certain sections. There is a center section of full-page glossy photographs of some of the recipes. One of these pictures shows flat, golden-brown soft cookies studded with chocolate chips. The accompanying label says “Roasted Pecan Chocolate Chip Cookies (Page 375).” Turn to page 375, though, and there’s a note at the top of the recipe that reads “The picture of the chocolate chip cookies is not this exact recipe. I was concentrating on showing the chocolate so, for the picture in the photograph insert, I baked the Toll House chocolate chip cookie recipe with chocolate chips only–no pecans.” That’s just bizarre. I don’t understand why any cookbook would include a picture of the wrong cookie. (The actual recipe looks nothing like that picture. The cookies are thicker, lighter in color, and sandy from the chopped pecans.

However, that did give me a guess as to why the “Memorable Silky Chocolate Meringue Pie” looked nothing like its picture, either. That recipe had what seemed to be another confounding error. In making the custard filling — always a somewhat touchy task — one step in the recipe says, simply, to stir chopped chocolates, butter and vanilla into starch-thickened mix of milk and egg yolk that had been cooking on the stove. Presumably I was supposed to mix or beat or do something until the chocolate and butter were melted and mixed in, but who knows? At my mom’s suggestion, I gave the mixture a good, hard, fast beating with a wooden spoon. But I don’t know if the non-silkiness of the finished pie was attributable to some confusion here, or elsewhere in the recipe. (It was tasty enough, but neither memorable nor silky.)

There’s also the inexplicable suggestion to spray parchment paper with nonstick cooking spray — which will just leave the bottoms of the cookies placed on it greasy. These goofs are few and far between, but they belie the premise of the book: that we all can follow the recipes therein and achieve better baking through science.

The greatest value in BakeWise is, for me, as a text. It is easy and enjoyable to read, and as intuitive a breakdown of the science of baking as I’ve seen. But there are other sources I’ll turn to first for a reliable success. There are certain tricks in the book that I will use henceforth and forever: roasting, buttering, and salting nuts before chopping them to go into cookies; putting a crumb layer between a custard pie filling and the meringue topping; swapping out regular cream for whipped cream in some recipes. I’m delighted to have BakeWise on my shelf and expect I’ll check it often to understand more of what’s happening when I bake. But it won’t be the first source I’ll turn to for recipes.