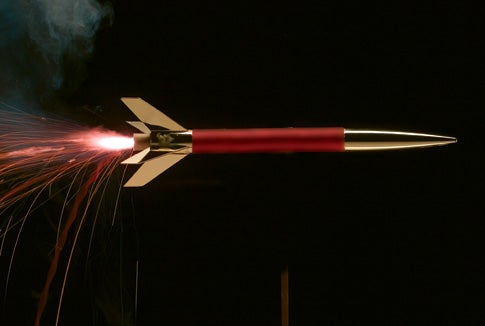 A rocket speeds away, fueled by an oxidizer and Oreo cookie filling.

A rocket speeds away, fueled by an oxidizer and Oreo cookie filling.

Food contains an amazing amount of energy. If you don’t believe it, feed candy to some kids and watch them bounce off the walls. Of course, tot-baiting is only one way to turn food energy into noise and destruction.

A king-size Snickers has 541 Calories. That’s Calories with a capital “C,” or 1,000 lowercase calories. A small-“c” calorie represents the energy required to heat one gram of water by one degree Celsius. So that Snickers could theoretically heat a gram of water 541,000 degrees or, more realistically, bring a gallon and a half of water from nearly freezing to nearly boiling.

The energy in food is typically released when, through a complex biochemical pathway, sugars, starches and fats react with oxygen from the lungs. It’s a form of slow-motion burning that, thankfully, rarely involves fire.

But you can liberate the same amount of energy in much less time by mixing the Snickers with a more concentrated source of oxygen—say, the potent oxidizer potassium perchlorate. The result is basically rocket fuel. Ignited on an open fireproof table, it burns vigorously, consuming an entire candy bar in a few seconds with a rushing tower of fire. If you could bottle the energy of kids playing and turn it into a Molotov cocktail, this is what it would look like.

Of course, you can’t actually fire a rocket with a Snickers bar; the nuts would clog the nozzle. Oreo cookie filling, however, works very nicely in standard model-rocket engines. (Caution: The Model Rocket Safety Code does not approve of filling rocket motors with highly reactive chlorate-Oreo mixtures.)

The thrust wasn’t great, but my chlorate-Oreo rocket did get off the ground—not bad for a half-baked confection. Serious sugar hits like Pixy Stix and Gummi Bears give more power, but true “candy rockets” (yes, that really is a term used in model rocketry) are made with the hard stuff: pure sucrose (table sugar) or dextrose (processed starch). With food-grade potassium nitrate as the oxidizer, the result is high-power rocket fuel that you could feed to the kids—although I don’t recommend it.

Click here for video of candy rockets taking to the sky.

ACHTUNG! Theodore Gray is trained in lab safety procedures, so don’t try this at home. Find more on Gray’s scientific pursuits at periodictabletable.com.