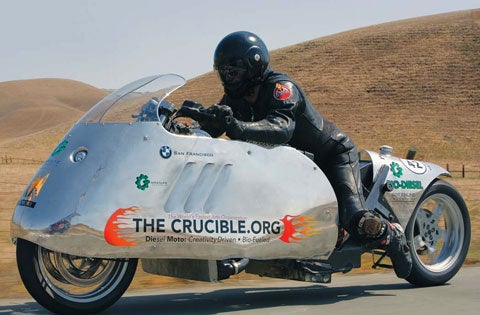 Michael Sturtz is that rare speed freak who hates the idea of spitting carbon into the air. So he built a biodiesel motorcycle-a really, really fast one.

Sturtz and his team at the Crucible, an industrial-arts group in Oakland, California, started with a BMW diesel car engine and fitted it to an old motorcycle. They spent weeks building a frame, linking the disparate pieces, and creating a fuel-delivery system with biodiesel-compatible parts. Then the engine’s computer shut down the engine for four days. “It thought the car was stolen,” Sturtz explains.

After some skilled hacking (and pleas to BMW for security codes), they got the green machine to hit 130 mph. At Utah’s Bonneville Salt Flats next month, Sturtz is aiming for a record 160.

**POWER
**
To double the engine speed, the team created a bicycle-chain-like add-on to the gearbox. The motor spins one sprocket, while a chain wrapped around it turns a second sprocket with half the number of gear teeth so it spins twice as fast, cranking up to 8,200 rpm.

**AERODYNAMICS
**
To help the bike cut through wind, they hammered together pieces of aluminum to make a fairing. Then they built a custom aluminum fuel tank to match.

**CONTROL
**
The bike is stable and street-legal (Sturtz has driven it around Oakland), but initially the danger was in just getting it moving. Since one foot pedal acts as the clutch and the other controls the shifter, they had to add a switch so the bike could start in gear with the clutch in, allowing the rider to balance. The team is working on a handlebar clutch.