How Counterfeit Contact Lenses Can Make You Go Blind

Something to really be afraid of this Halloween

Everyone knows someone who gets really into Halloween. He spends hundreds of dollars on costumes, or she teases up her hair, but the effort is always impressive and ends up making the masquerader look like a completely different person (or species!). Colored contacts are a staple for these all-out costumes, turning your average person into a very convincing cat or zombie or fairy tale character. But wearing counterfeit or unapproved colored contact lenses could cause eye infections or even permanent eye damage, as the U.S. Immigration and Customs Enforcement (ICE) recently warned in a scary press release.

“There’s a lot of demand for these lenses around the holidays—when people dress up for Halloween, they want to look as authentic as they can,” Matthew Bourke told Popular Science. Bourke is a spokesperson from the Intellectual Property Rights Coordination Center, working in collaboration with ICE and the Food and Drug Administration to crack down on the sale of these products. “They’re also very popular among youth—they’re in movies, on TV, in music videos. These are pervasive in pop culture.”

You might have seen these lenses on sale at a Halloween store or online, but it’s actually illegal to sell contact lenses to a consumer without a prescription from a licensed doctor. That’s because optometrists are trained to make sure the contacts fit before prescribing them, says Jeffrey Walline, the chair of the American Optometric Association contact lens and cornea section. “If the contacts don’t fit right, they could result in poor vision or poor eye health and poor comfort,” he says.

Though serious adverse events are unlikely, they do happen on occasion; there are about 1 million eye infections due to contacts every year, according to the CDC, and about 1 in every 500 of those is serious enough to result in blindness. “If you do have a problem, and it’s significant, you can lose your vision permanently,” Walline says. “And you would experience the most painful thing you’ve ever experienced. You really don’t want to risk it.”

Illegal contact lenses increase the infection risk, and the prevalence of those lenses is increasing. 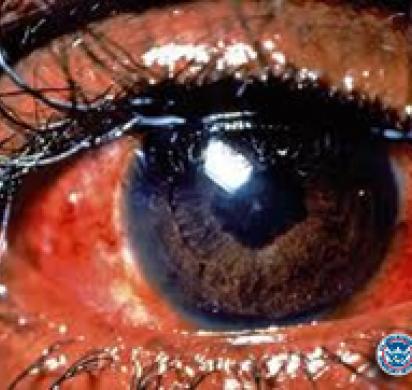 Even corrective contacts carry some risk of irritation and infection. And sometimes consumers—or even doctors—can’t tell if lenses are counterfeit. Sometimes decorative lenses are produced in clean facilities to ensure that the contacts are packaged without bacteria that can infect the eye, but sometimes they’re not.

But the important health aspect is the fit of the contact lens, since every eye is a little different. If you get the wrong size contact lenses, it’s like putting a size 6 shoe onto a size 9 foot, Bourke says, and that can result in real damage to your vision. That risk is compounded by the fact that anywhere from 40 to 90 percent of contact users wear them incorrectly by not cleaning or replacing them often enough, according to the CDC.

And though the eye issues that result from ill-fitting decorative lenses aren’t new, the contacts have become more pervasive in the past five years. Many of the lenses are made in places like China and Singapore, Bourke says.

“Once those distributors get their hands on the product, they either work with retailers to sell them illegally to the American consumer, or they mislead retailers,” Bourke says. “[The distributors] may tell retailers that Halloween is coming up, they’ve seen these on movies and on TV, and they’re a hot product and in high demand, so retailers get really excited.”

Even for those manufacturers, distributors, and retailers that know the law, the profit margins for colored lenses can be to enticing to turn down. The lenses are so small that they’re easy to ship and transport; if they’re labeled as something else, they can easily slip past the notice of customs agents.

Plus, Bourke adds, the product moves quickly, especially in the few weeks before Halloween and into the holiday season, when many people give them as gifts. In a two-week period this month, Homeland Security Investigations confiscated about 5,000 pairs of illegal contacts, a number that doesn’t include local police activity; the main investigation called Operation Double Vision that launched in 2013 has resulted in the seizure of more than 20,000 pairs. Chances are, that’s only a small percentage of the illegal lenses that are on the market. “The holiday season really gets criminals motivated to exploit the American consumer,” Bourke adds.

Luckily, federal officials are on the case. There are task forces in every major port city, Bourke says. Customers can report retailers illegally selling the lenses (again, that’s any retailer that is not an optometrist) by calling the Homeland Security Investigations tip line at 866-DHS-2-ICE, or reporting the information anonymously online.

If your Halloween costume calls for decorative contact lenses, don’t buy them at the last minute—start early. Go see your eye doctor and buy a pair of decorative contacts that actually fit your eyes. Those contacts might be a little more expensive than the illegal ones, but not much more, Walline says. And paying a little more for your health is better than going blind. “You’d be crazy not to,” he adds.