Hotter than the interior of the sun 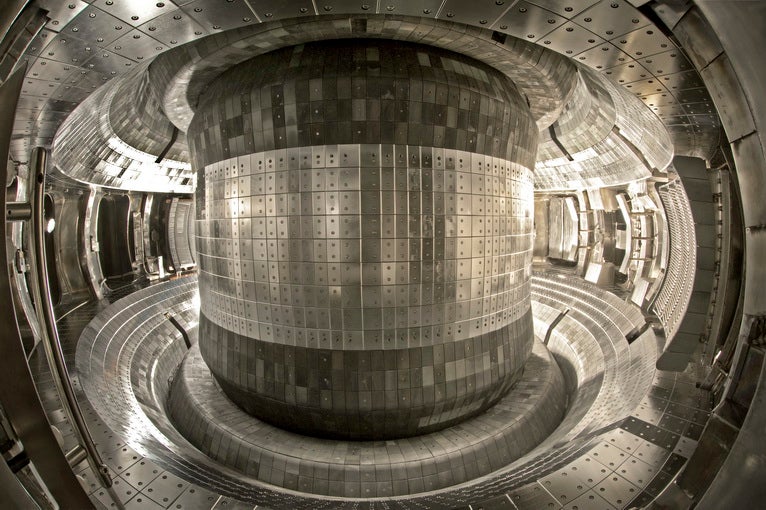 A Chinese fusion reactor managed to sustain plasma at temperatures of over 90 million degrees for 102 seconds, according to an article published in the South China Morning Post. That’s over a minute in which a machine sustained an electrically charged gas with a temperature approximately three times hotter than the core of the sun.

This achievement at the Experimental Advanced Superconducting Tokamak (EAST) in Heifi, China, comes just days after German chancellor Angela Merkel inaugurated the Wendelstein 7-X, another experimental fusion reactor. At the time, the German group was quite pleased to create 80 million degree Celsius hydrogen plasma for a quarter of a second, an achievement now dwarfed by the Chinese machine. However that comparison doesn’t mean too much, as the two machines are in vastly different stages of their life cycles. While the Wendelstein 7-X is just gearing up, creating its first hydrogen plasma last week, EAST has been going for years. It created its first plasma in September of 2006, nearly a decade ago.

EAST is a tokamak, a doughnut shaped device originally designed by the Soviets. It holds the plasma in place using magnetic fields, and operates in pulses. The Wendelstein 7-X, in contrast, is a stellarator, a similar design but one that can theoretically operate continuously, like an artificial sun.

Both are expecting to be dwarfed by the ITER, a tokamak-style fusion reactor currently under construction in France. When completed, the internationally-funded reactor will be the largest in the world.

ITER’s central goal is to build a reactor capable of producing 10 times the power needed to run it. They hope that once it is built, it will operate for around 20 years.

For the record, the hottest plasma temperature created in a lab was 510 million degrees Celsius at the Tokamak Fusion Test Reactor which operated at Princeton between 1982 and 1997.