Cadillac’s Super Cruise has a processor that combines a camera, radar, and GPS data to steer the car down the center of its lane. 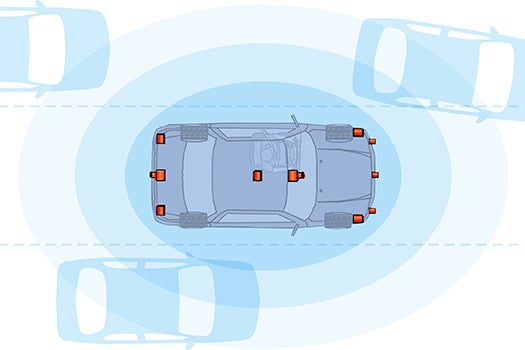 While Google’s prototype self-driving car does a fine job commanding headlines, automakers have been rolling out the features that will ultimately lead to a road-ready autonomous vehicle. Cadillac Super Cruise is an important step in that process. Like current adaptive cruise-control systems, Super Cruise, which GM will likely debut by 2016, controls the throttle and brakes and adjusts the distance between the car and surrounding traffic. But Super Cruise adds another detail: It steers. A processor combines camera, radar, and GPS data to guide the car down the center of its lane. 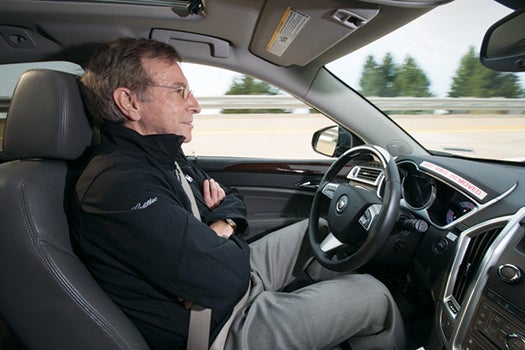 General Motors Staff Researcher Dr. Jeremy Salinger road tests a Cadillac semi-autonomous driving technology it calls”Super Cruise” that is capable of fully automatic steering, braking and lane-centering in highway driving under certain optimal conditions Friday, March 23, 2012 in Milford, Michigan. Super Cruise is designed to ease the driver’s workload on the freeway, in both bumper-to-bumper traffic and on long road trips by relying on a fusion of radar, ultrasonic sensors, cameras and GPS map data. The system could be ready for production vehicles by mid-decade. (Photo by John F. Martin for Cadillac)

The driver initiates Super Cruise by pressing a button on the steering wheel. At that point, the system takes control of the wheel, accelerator, and brakes.

A video camera in the rearview-mirror assembly scans for highway lane markers. A processor analyzes the data to adjust the steering and brakes to keep the car safely in the center of the lane. The system also adapts to driver behavior; for example, if the car detects that the driver prefers plenty of room between his vehicle and big semis, it will cheat toward the left- hand lane marker.

The system can assess traffic patterns as well. The processor combines input from three radar sensors (short-, mid-, and long-range) to detect and classify stationary and moving objects. Then it adjusts the throttle and brakes to maintain a minimum distance (the driver can also opt for a longer one) between the car and traffic ahead.

GPS tracks the car’s location, comparing its path to road maps, which allows the system to anticipate upcoming curves, for instance. And if conditions get too hairy for Super Cruise to handle—say, bad weather—motors in the seat vibrate to tell the driver to take the wheel.