Visitors of Germany's largest international motor show will get a first look at Toyota's long-promised plug-in Prius this month, but buyers still have a long wait ahead. 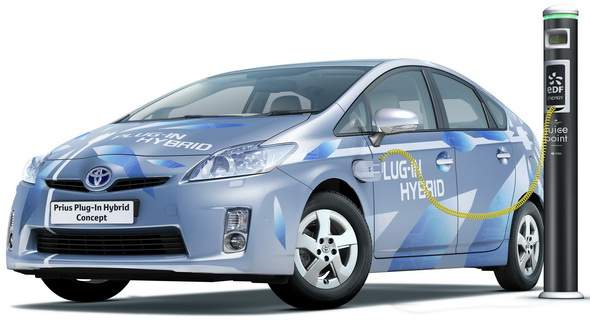 It’s been the talk of the hybrid-car crowd since the first hybrids landed in dealerships: The plug-in Prius. And with GM’s plug-in Volt set for a 2010 launch, all eyes are now on Toyota. This week the company offered its first tangible evidence of a plug-in Prius, at least in two dimensions. The company released the first official photo image of a new Prius concept car that can get juice from the electrical grid.

Toyota hasn’t yet offered any details on the car, except to say that around 150 units of the plug-in Prius will arrive in 2010 at the doorstep of selected fleet customers in Europe as part of an extensive field test. The lease program will subsequently migrate to Japan and the US. More details on the plug-in Prius concept will arrive next week ahead of the Frankfurt Motor Show, where the concept will be unveiled.

Other concept cars Toyota plans to introduce in Frankfurt include a hybrid version of the Corolla, and a sporty Lexus hatchback fitted with a hybrid-drive system.