Design tweaks aside, the EOS-R is an impressive camera. 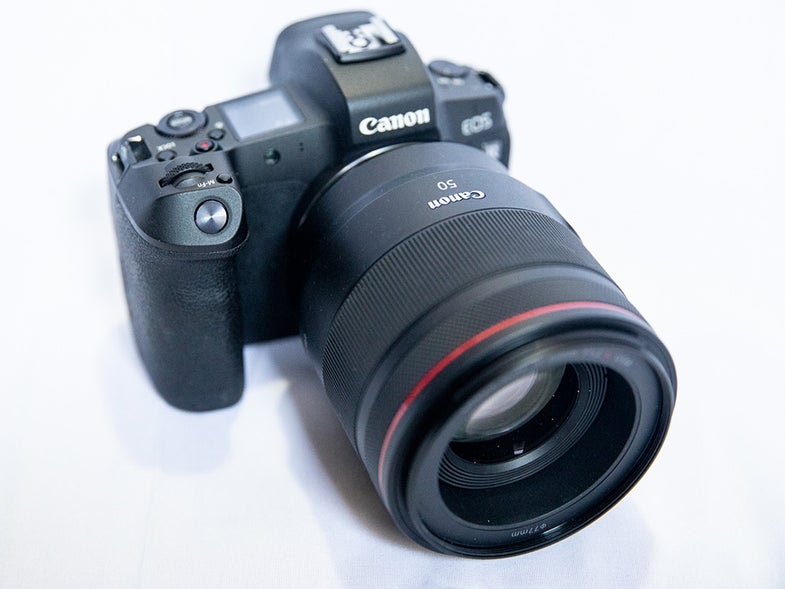 The Canon EOS R is the company’s long-awaited first full-frame mirrorless camera. It’s built around the same 30.3 MP CMOS sensor found in the 5D Mark IV, but features a newly designed RF lens mount with a 54mm internal diameter and a 20mm flange distance. According to Canon, that shorter mount means smaller and more responsive lenses. It’s an important camera for the market, especially considering it arrived almost simultaneously with Nikon’s full-frame mirrorless, but the EOS R isn’t without its quirks. Although existing Canon shooters will find some aspects of the EOS R familiar, there are some pretty radical design changes that could take some getting used to. Let’s dive in.

The biggest change to the EOS R is its redesigned RF lens mount. The new mount features a 12-pin communication system, making the performance between the new RF mount lenses and the camera body faster and more precise than the typical EF lenses it uses on its DSLRs. Canon also claims that EF lenses will work exactly as they would on a DSLR when adapted to the RF system because of its backwards compatibility.

On the body there is the addition of the M-FN bar. This is a brand new customizable bar located to the right of the viewfinder that allows for taps and swipes to control specific functions of the camera. Also new is the control ring dial found on the front of the new line of RF lenses. Together, they replace the thumb wheel typically found on the back of Canon’s other high-end cameras.

Dual Pixel AF—a system that uses split pixels on the sensor to get more accurate focusing—is now available while recording video and can internally capture C-Log footage, but there is still 1.83x crop factor on the 4K footage that it shoots.

The main dial for controlling shutter speed is in a familiar spot on the top right of the camera, slightly below that you will find the controls for changing aperture. A dedicated ISO button is notably missing from the top of the camera: although you will find the setting to change that by clicking the M-Fn button (that’s also where you can find controls for things like your shooting modes, AWB, AF mode and exposure compensation).

The mode button lives on top of the back dial, the button to switch to begin recording video is slightly above it. You will also find controls for LCD panel illumination and Lock on the camera’s top. On the back right of the camera AF-On, AEL/FEL and your AF point selection button are all found in familiar places. Q and Set are combined into one button located between four customizable arrow keys, which approximate the functions of the dial on the back of a DSLR. The Info button, trash and image review all move to the right side of the camera body.

The EOS R is lighter than a DSLR, but the grip is substantial and it feels like a high-end camera. The menus are intuitive, but the ergonomic changes on the body definitely took some getting used to.

After some extensive time shooting with the EOS R there are some updates here that we could have done without. The nice thing about the camera is that everything is highly customizable—so there are certainly ways to find work arounds for the things that we didn’t find to be ideal. Let’s dive into some of those.

The new M-Fn bar was easily the most frustrating aspect of this camera. Although it initially seemed like a clever feature to control a number of camera functions, but it has issues. First of all, the placement is better in theory than in practice. It sits next to the viewfinder, which means you’re likely to accidentally hit it at some point. You can set it so it requires a tap to activate, which takes extra time, or for immediate activation, which increases the chances of an accidental press. I tried customizing it to control a variety of different camera functions, but regardless of what it was set to control, or how it was set to function, I found that it slowed me down and led to missed shots. Ultimately I found I was happiest with the EOS R when the M-Fn bar was disabled completely.

The touch and drag AF interface on the EOS R was one of the handiest features as it allows you to move a focus point with your finger while looking through the viewfinder. There are other ways to select your AF point though. The default settings require you to press the AF point button and then utilize the front and rear dials to move the point across the screen. The arrow keys on the back of the camera can also handle this task. Although it was slightly less precise than using the dials or buttons, touch and drag was certainly the fastest way to select a new AF point. In low light situations the AF was quite accurate, although not nearly as speedy as the 5D Mark VI.

The customizable control ring on the new lenses are also useful. As there isn’t a dedicated ISO button (its hidden under the M-Fn button) I toggled between having the ring control that and my aperture. You’re less likely to accidentally activate it than the M-Fn bar, and the clicks that it makes while being moved provide a tactile experience while switching a setting.

The camera’s WiFi and Bluetooth connectivity seems much faster than what’s been found in other WiFi enabled Canon cameras. A fully charged battery will last you a full day of shooting. The new line of RF mount lenses designed for the camera sharp and fast. And if you are using the control ring mount adapter you can utilize your old glass. Most importantly, the images from the camera camera look really good.

Although the camera has its share of quirks, the images that it produces are beautiful. The new line of lenses certainly have something to do with this, but the out of camera JPGs have a pleasing contrast, a crisp look, and handled color quite well. Even in low-light situations, with ISO boosted to 8000 the quality is totally acceptable, even when viewing images up close.

The EOS R might not be quite the “mirrorless 5D” that some photographers were hoping for, but it’s still a good option for the high-end enthusiast or as a backup body. There are certainly some quirks within the design, but as we mentioned, there are work-around. As Canon has stated, this new line was never meant to replace the well-liked line of DSLR favored by the pros.