But they can still mess you up if you swallow them 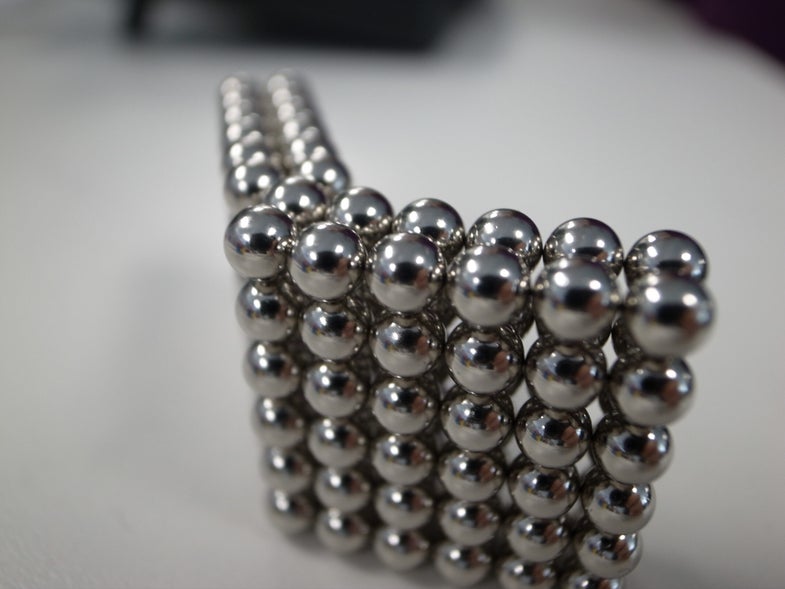 Don’t swallow magnets. This may seem obvious enough that it shouldn’t have to be said even once, but we’re going to repeat it, just to be safe: Don’t swallow magnets. Especially rare earth magnets. Until a few years ago, rare earth magnets were marketed as desk toys under such names as Buckyballs, Zen Magnets, and Neoballs. Users could shape these spherical neodymium magnets into all sorts of desktop sculptures to stave off boredom. After product recalls and loads of legal drama, they’re about to go back on the market – just in time for the holidays.

Why were these products banned in the first place? While they were marketed as toys for adults, they inevitably ended up in the hands — and mouths — of children, sometimes with truly brutal consequences.

Swallowing just one of the pieces is unlikely to cause any harm, but two or more create a serious health risk. Since the small magnets are remarkably strong, they can attract one another even from some distance away. That means they can pull themselves together inside of you, breaking through bodily tissues to do so. Imagine the Death Star garbage masher from “Star Wars,” but if the walls were different pieces of your intestines.

This is not just a thought exercise meant to make you curl your toes in discomfort. This happened to more than a few children who unwittingly swallowed pieces of the desk toy. In 2012, a 3-year-old in Oregon swallowed a cringe-worthy 37 magnets, which bored four holes in her gastrointestinal system. In 2013, a 6-year-old in Ontario swallowed 19, leaving her with two holes in her bowel. And the list goes on.

In 2012, the Consumer Product Safety Commission initiated a recall of neodymium magnet toys, citing examples like these. Major small rare earth magnet (SREM) sellers contested the recall, but in 2014 the CPSC banned the products. The terms of the ban meant the products couldn’t be sold in the United States.

But last week, an administrative judge ruled in favor of an appeal by Zen Magnets to lift the ban, citing an improper cost-benefit analysis by the CPSC.

“The Commission’s finding that 90% of the predicate injuries only ‘possibly’ involved magnet sets provides the Court with little guidance,” reads last week’s ruling, highlighting the CPSC’s insufficient evidence that the products are dangerous. “Numerous comments received by the Commission indicated that teachers and researchers use magnet sets to model and explain physics, biology, and geometry concepts,” the judge continues. “The Commission’s findings, however, contain no substantive discussion of those uses.”

In other words, the judge determined that the harms associated with these toys were overstated – and the benefits of the toys overlooked – when the CPSC made its decision. But how is a government body supposed to balance the costs and benefits of a ban when it comes to something like SREMs, which are essentially just novelty items? “Nobody wants anyone to be injured, but we do accept as a society that there are products that injure people because the benefit outweighs the risk,” Timothy Mullins, who’s represented Buckyball co-founder Craig Zucker during the proceedings, tells Popular Science. “It’s an important part of balancing everyone’s interests in banning a product.”

Zucker, who has locked horns with the CPSC since 2012, will not be selling Buckyballs anymore, due to the terms of the 2014 settlement agreement. He is, however, a consultant for a new SREM seller called Bucky*. Their product can be on your desk — and hopefully not in your stomach — in time for the holidays.