Enter from a hidden door on Fifth Avenue in Manhattan 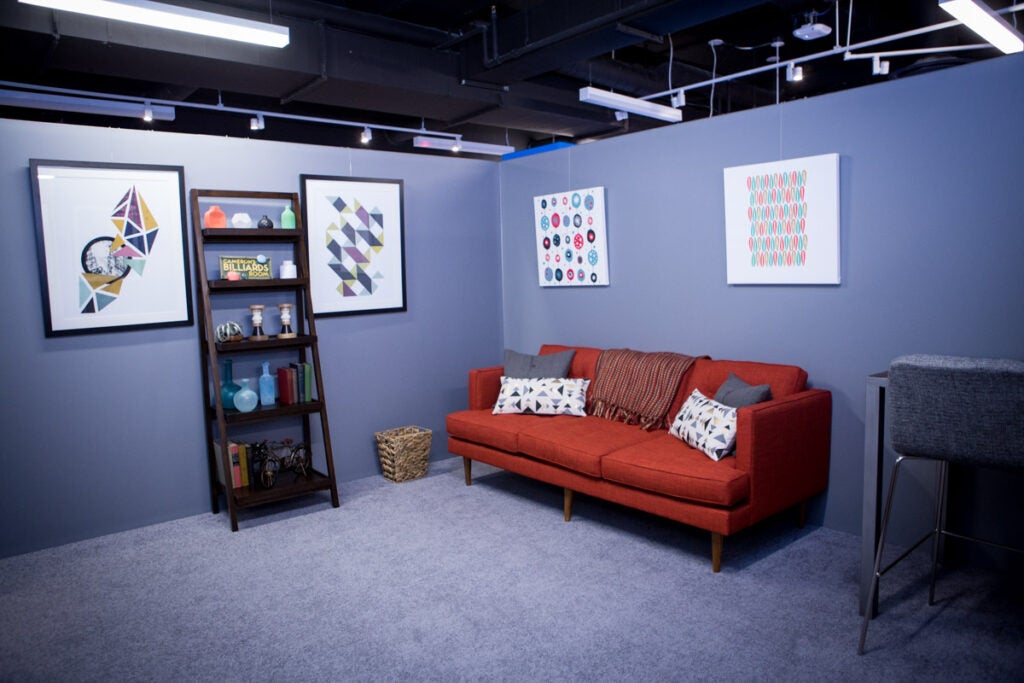 Microsoft opened the doors to its first flagship store in October—but a secret room hidden above the shop was never mentioned. The room isn’t open to the public, and you need a special invitation to enter. The room even has a secret entrance located directly on Fifth Avenue in New York City that lets you walk up from one of the world’s busiest shopping districts straight into an exclusive product demonstration area.

Microsoft is inviting a select group of developers to this secret room at the Microsoft Store starting today. The company is using the space to showcase its mixed reality headset Hololens, which layers digital images onto the real world using holograms (what some call “augmented reality,” or AR). Ahead of the developer previews in the private showroom, Popular Science was invited to the space to check it out.

If you want to try Hololens yourself, there’s still time to sign up for the developer program. But in case you’re not one of the lucky few who will try the headset this year, here’s a look at what happens in a Hololens showcase:

The developer showcase consists three demos: HoloStudio, a 3D modeling software; Project X-Ray, a mixed reality video game; and a short commercial applications story. Each demo is tailored to a specific feature. After experiencing all three, it was apparent to me that Hololens is a novel, masterfully engineered piece of technology with lots of potential. It is easy to imagine how many different types of applications the headset could run.

That said, it’s still very much a prototype at this stage. We are probably several years away from seeing Hololens gain any sort of major momentum out in the public. The demo applications currently available at the Microsoft Store vary dramatically, and they’re all very shallow experience—more proof of concepts than final products. 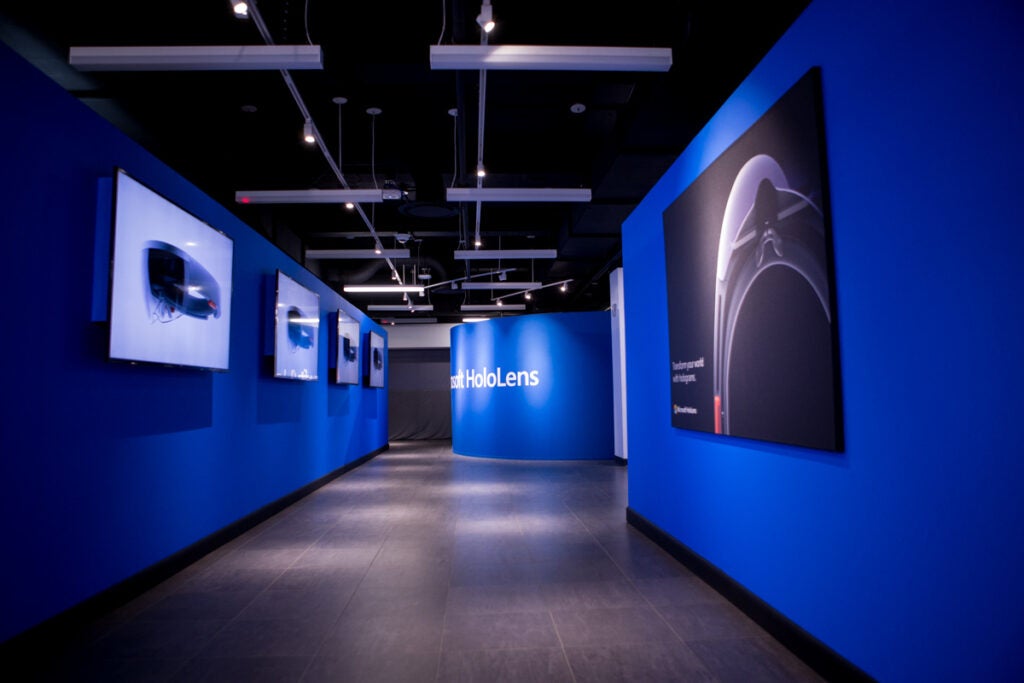 HoloStudio is a 3D modeling software created for Microsoft HoloLens. It demonstrates the basic controls of Hololens like voice control, gestures and moving your head to view different objects. It’s a lot like MS Paint for Windows, but with Hololens, its purpose is to inspire people to create 3D objects using holograms. The software makes it easy and natural to understand the basic controls.

It starts with a digital toolbox that you can place anywhere in the room. You can drop it on the ground or a table or anywhere along the wall. The headset’s spatial recognition features quickly learn the boundaries of the room you’re in and any tabletop. When you’re playing with holographic objects, the laws of physics don’t apply. You can manipulate holograms easily, place them anywhere, and edit them by waving a finger. The program lets you to select 3D shapes, draft almost any possible object you can think of, import 3D modeling files, and export them to cloud services like OneDrive. The HoloStudio demonstration is meant to show how product designers (like someone that makes furniture or toys) can sketch, create, and manipulate the holographic images in real time. By looking around and tapping your finger, you can fully build and edit an entirely new creation from thin air. Changing the size, location, pitch, rotation, and other attributes of any digital creation was as easy as pointing my finger or holding it down.

Project X-Ray is a mixed reality gaming demo that Microsoft first showed off on stage earlier this year at its big fall event. It starts by having the user scan the walls of the environment. After the headset maps the room, you launch the game. Enemies start invading your home, bursting through the walls, flying, and attacking.

You must defend yourself from holographic attackers coming from all 360 degrees, and duck and dodge their firepower. The game is a particularly impactful part of the experience because it shows of the processing capabilities of the Hololens. The amount of information rendered in real-time without being tether to a compute is remarkable. 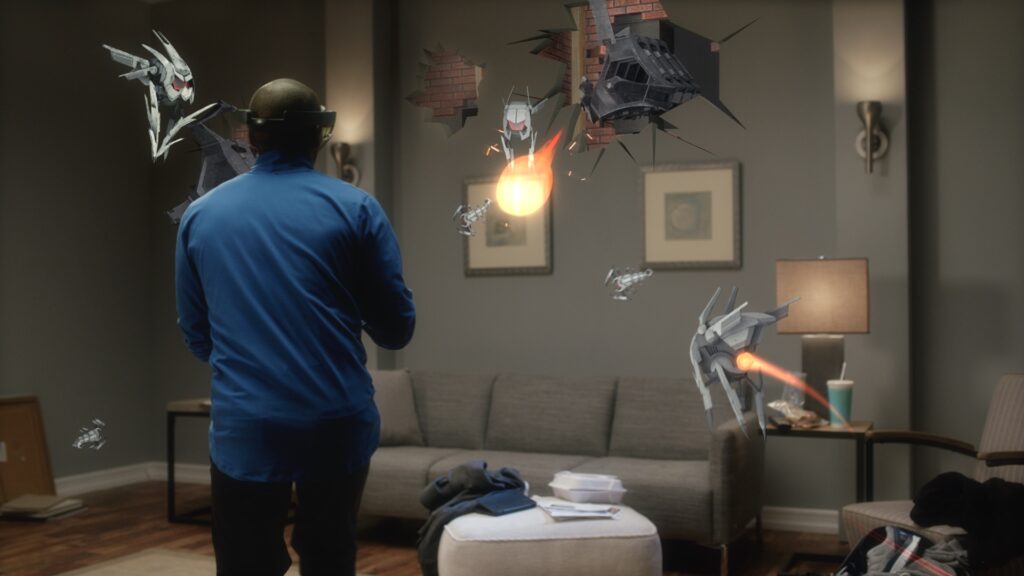 The game demonstrates the 3D mapping capabilities of Hololens, as well as showing off how much computing power is packed directly into the headset itself. Unlike semi-rivals the Oculus Rift and HTC Vive virtual reality headsets, which must be tethered to computers, Hololens works all on its own: all the hardware necessary to run any program is inside the headset. Although Microsoft hasn’t come out with the Hololens’ exact technical specifications, employees told that the headset contains more power than the average laptop with no fans. The Hololens is powered by a CPU, graphics process unit (GPU), and something that Microsoft is calling a “holographic processing unit” (HPU), which interprets and processes data from the device’s sensor array.

The final part of the Hololens showcase at the Microsoft Store is an exploration of the types of storytelling in mixed reality. The scenarios that are described in the demonstration often require multiple people to be wearing Hololens at the same time in the same area. Then, the software can tell where everyone in the audience is looking, what they’re looking at, and actually inscribes lines of text in the air and room itself.

For now, only these short demo apps are available from Microsoft, but it’s easy to imagine having dozens or even hundreds of apps one day. Microsoft’s goal is to use these simple demos as a way to get third-party developers excited for building their own software for the platform, and in that sense, the demos are indeed promising.

But Microsoft is pitching this headset as an eventual replacement for everyone’s desktop computer, something that deserves to be treated as a primary device. And it’s true that the Hololens already has all of necessary computing power to be used as a legitimate productivity tool. Now all it needs is a killer app. 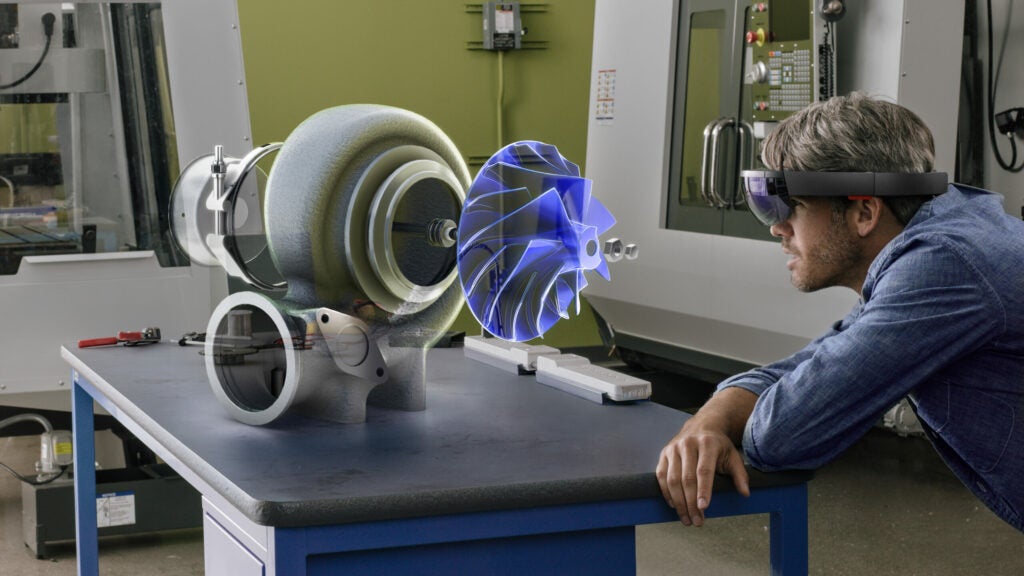