Mathematical models suggests that delaying aid by a few weeks could lead to 'catastrophic devastation.' 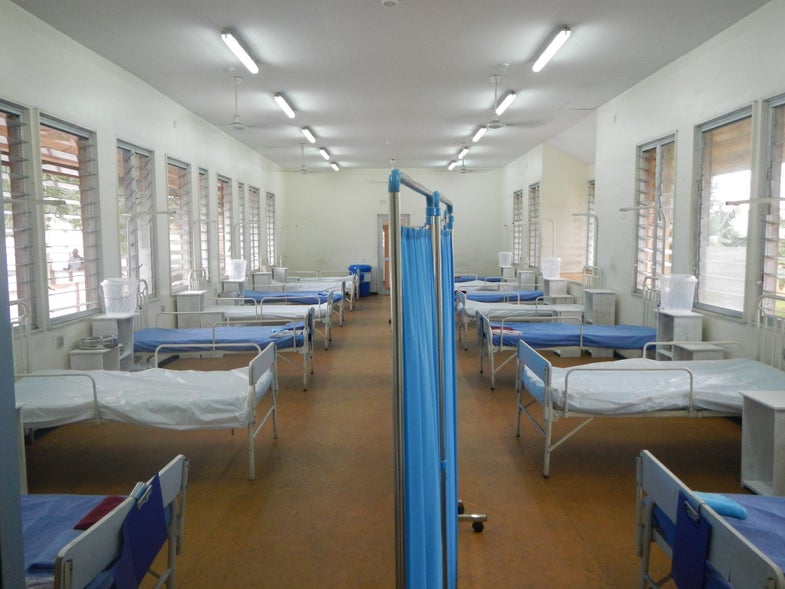 The Ebola outbreak in West Africa is growing exponentially. The latest reports suggest that at least 9,915 people have been infected, and 4,555 have died. And this is just the beginning. Previously, the CDC estimated that a startling 1.4 million West Africans could be infected by January.

The outbreak is already considered to be out of control, and according to a paper published today in The Lancet Infectious Diseases, the window of opportunity to avoid a total catastrophe is closing. They calculated that sending aid immediately to Montserrado, Liberia, could prevent up to 98,000 cases of Ebola. However, if the international community stalls for another two weeks, the same amount of aid would prevent 54,000 deaths at best.

The reason why comes down to some pretty simple math. (Don’t worry, you won’t need a calculator.)

The study authors — epidemiologists from Yale as well as Liberia’s Ministry of Health and Social Welfare — charted the spread of Ebola between June 14 and September 23 in Montserrado, a county in Liberia that has been one of the hardest-hit by the virus. The researchers used that growth rate to forecast how many new cases could be expected in the coming months. The model predicts a worst-case scenario of 170,000 new cases and 90,000 deaths in Montserrado by December 15.

Next, they estimated the impact various types of aid could have in preventing those new cases. Anti-Ebola measures include building treatment centers to care for the sick, identifying and monitoring people who’ve come in contact with Ebola patients, and distributing kits that help people set up at-home isolation wards for when hospital beds are not available.

Up to now, the U.S. has pledged the largest amount of Ebola aid, setting up 17 treatment centers that will isolate and treat 1,700 patients in total. Unfortunately, the researchers found that this level of aid is “woefully inadequate”.

To avert the worst of the epidemic, Montserrado would need nearly three times that amount of aid—setting up 4,800 new beds, while also scaling up contact tracing by five times its current levels and distributing home isolation kits. And that’s just to prevent 98,000 cases in Montserrado; it’s not enough to stop the outbreak in its tracks, and it doesn’t include the rest of Liberia, or Guinea or Sierra Leone where the outbreak is also raging.

To prevent those 98,000 cases, the aid would need to be sent by October 31, according to the researchers. To wait until November 15 would mean that the same amount of aid could only prevent 54,000 cases at best. The same aid, if it had been sent on October 15, could have prevented 137,000 cases.

That’s because every West African who contracts Ebola infects two people, on average. Then each of those two cases infects two more people, and so on, making the outbreak grow exponentially. Delivering aid sooner rather than later interrupts the exponential growth curve, preventing more cases in the long run.

“The key take-home message for readers is this: we have no time to waste,” epidemiology David Fisman, from the University of Toronto, wrote in a commentary. “The urgency of timely intervention in the Ebola epidemic cannot be overstated.” 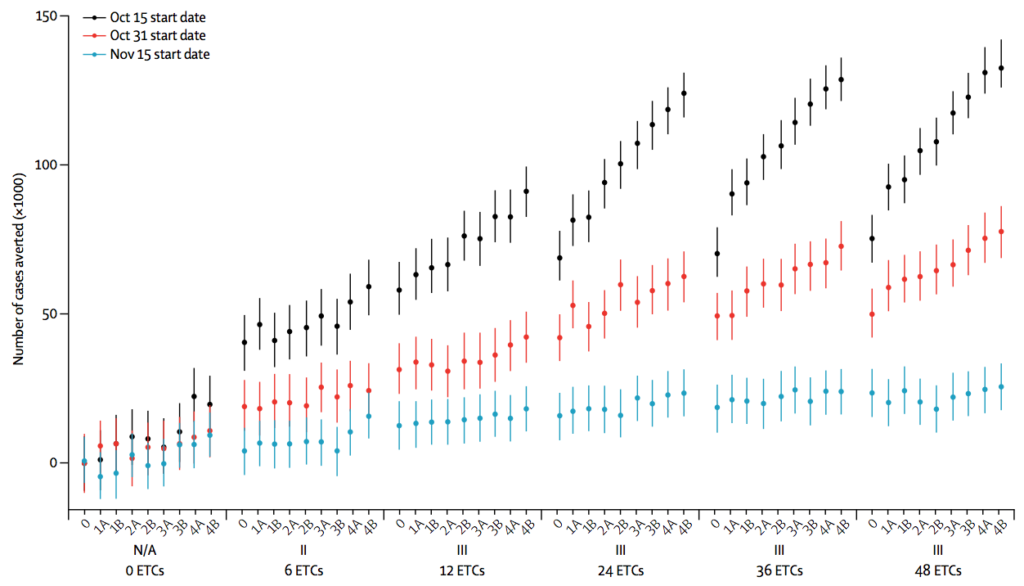 This graph shows the number of Ebola cases that could be averted by building new treatment centers (ETCs) and increasing contact tracing (on a scale of 0 to 4B, 0= baseline, 4B=200%) in Montserrado, Liberia. The graph shows that deploying aid on October 31 (shown in black) can save thousands more lives than deploying the same aid on November 15 (blue).

It’s unclear whether the predictions made for Montserrado could be extrapolated for the rest of Ebola-stricken West Africa. The region has been one of the hardest-hit, accounting for 1,600 cases and 1,000 deaths. But because 90 percent of Montserrado residents live in the capital of Monrovia, study author Joseph Lewnard explained in an email that controlling the epidemic there (and in other urban centers, such as Conakry and Freetown) could be more straightforward than in rural areas:

Lewnard also added that since September 23, Montserrado increased their number of hospital beds to 620 and scaled-up their distribution of protection kits, so the worst-case scenario is less likely now.

Nevertheless, the study paints a bleak picture of the situation in West Africa. One ray of hope is in the form of two experimental vaccines, which will begin trials in West Africa in January. But unless those vaccines prove to be safe and effective, treatment centers and contact tracing will be the best bet in the fight against Ebola during the coming year.

Fisman, in his commentary, points out that ultimately, the international community will help itself by helping West Africa. CDC director Tom Friedan appears to agree: