Cheese is one of those foods that has been around for so long, we’re not really sure how long it... 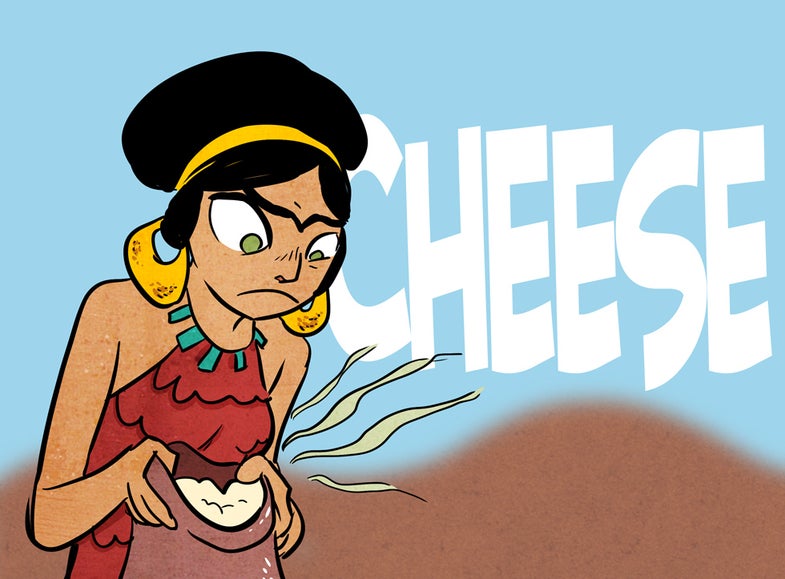 Cheese is one of those foods that has been around for so long, we’re not really sure how long it has been around. Given that milk curdles if you look at it funny, it’s not hard to imagine that cheese sprung up independently throughout the ancient world. The curdling method of choice is an enzyme called rennet (actually a bunch of enzymes) derived from calf stomachs. Any vegetarians who are just learning this now, I apologize. But there are other ways to curdle milk! You can make cheeses like paneer using citric acid, or switch to a microbial rennet (which is more widely used anyway).

In addition to being delicious, cheese is a great way to get milk to last longer*. Cheeses can be aged for years inside a protective rind or other coating, with any microbial or mold growth only adding to the flavor—such as in the blue cheese in the comic above. They even found some cheese on a 3,800 year old mummy. No word on how it tasted. You can learn more about how microbes shape the cheese we eat at MicrobialFoods.org.

As with all foods, there are some extreme examples. In Sardinia, Italy there is a questionably legal preparation of pecorino cheese that involves allowing it to become infested with maggots. Called Casu Marzu, it utilizes the acid produced by the larvae to create a creamy texture and harsh aroma. To make it worse, when threatened, the wriggling things can actually leap into the air. It is definitely not for the faint-hearted, and I’d love to meet the gustatory pioneer who first put that in their mouth.

*You’ll find that pretty much every food out there started off with the question, “How do we make this last?”. With the exception of lettuce, which nobody really cares to have around.