Scientists found that fluctuating the electrical signal to the rodents' paralyzed legs can make them step higher and walk for longer. 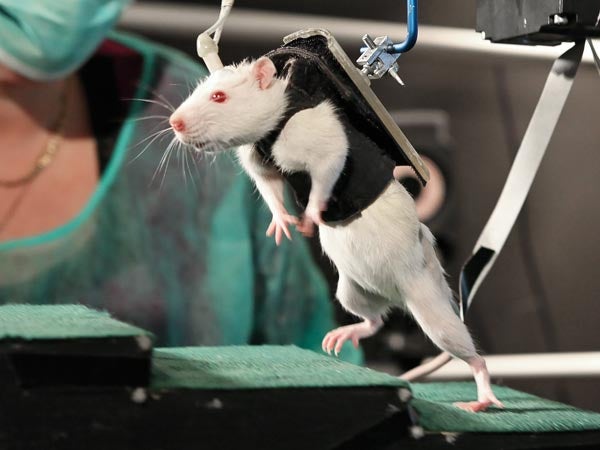 Like a severed telephone line (from back in the days when phones had wires), a spinal cord injury can cut off communication between the brain and the rest of the body — leaving a victim unable to move some or all of his or her limbs. It’s one of the leading causes of paralysis in the United States, and the debilitating effects often can be permanent.

But over the past few years, scientists have begun to overcome some kinds of paralysis using epidural electrical stimulation, or EES for short. With this technique, researchers implant two electrode arrays onto the spine: one above the injury, and one below. Then the top array reads the electrical commands from the brain and beams them to the lower array. The lower array then relays the message to the nerves that control the limbs. Essentially, the EES is a bridge that bypasses the spinal cord injury. The technology has already given paralyzed rats — and even people — the ability to walk again.

The trouble with current EES technology is that the arrays send out an electrical signal that never varies unless it’s manually adjusted. This lack of variation appears to cause the nerves to fatigue after a while. Eventually they just stop firing, and the person stops walking once again. Now scientists from the École Polytechnique Fédérale in Lausanne, Switzerland, have found a way to vary the EES signal so that patients — or in this case, rats — can walk longer and with greater control of their steps.

In the experiment, the rats’ spinal cords were completely severed, causing total paralysis of the hindlimbs. Yet the researchers got the rodents walking again with the help of EES and some training sessions (during which rats’ upper bodies are supported by a cute little vest). Then, they monitored the walking patterns of rats whose EES used the old, unvaried signal, and compared them to rats whose EES signals varied in their frequency, amplitude, and pulse duration on every step. And it appears that the new algorithm has promise.

As the signal’s frequency was dialed up from 20 to 90 Hertz, the rats took larger steps, ranging from 2.9 to 6.8 centimeters in height. Modulating the frequency helped the rats to walk longer: Rats whose EES continually pumped out 40 Hz signals eventually collapsed when their muscles stopped responding, whereas rats whose EES frequency varied were able to walk 1,000 steps to the end of the test — almost double the distance of the 40 Hz rats, on average. The modulated signal may be more effective, because it mimics the diverse ways that neurons fire naturally.

The new turning algorithm also helped the rats to overcome more complicated obstacles, in the form of rodent-sized staircases whose steps ranged from 1.3 to 3.5 centimeters. Because the frequency modulation helped the rats to take larger steps, those rats had a much easier time walking up the staircases. They climbed the staircases successfully in 99 out of 100 attempts, whereas the rats who used the old technology “tumbled against and failed to pass the lower staircase.” (Aww.)

According to the researchers, the modulated signal may be more effective, because it mimics the diverse ways that neurons fire naturally. Additionally, the new controller continuously tracks the motion of the legs, automatically adjusting the trajectory of each step based on that feedback. In this experiment, that tracking was done with cameras surrounding the rodent. If/when the system becomes adapted for humans, the researchers think wearable sensors may be able to take the place of the camera setup.

In a nutshell, the new algorithms make it easier to control the body’s movements to a finer degree, in an adaptable way — and in real time.

Up next, the lab will be testing out the new signaling algorithm in human patients beginning as early as next summer.