NYC has publicized its plans to modernize old public pay phones, but not this. 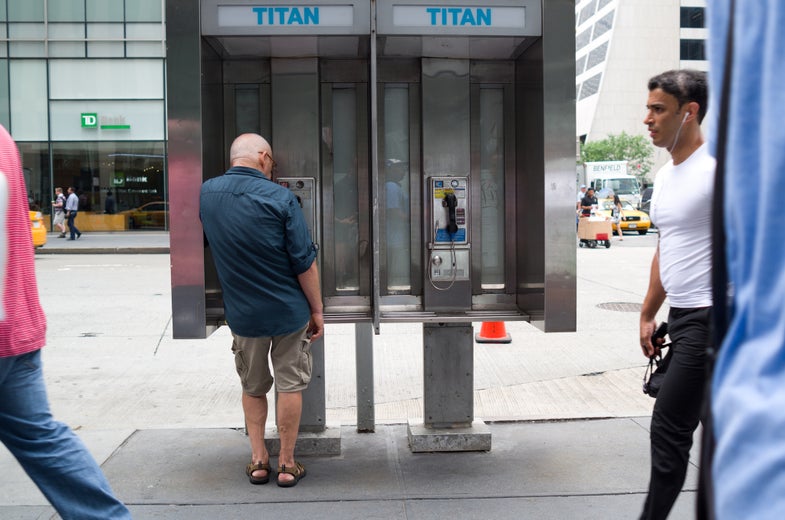 A company has installed beacons inside hundreds of downtown New York City pay phones that ping the smartphones and tablets of New Yorkers walking by, Buzzfeed reports. Buzzfeed found that the beacons are able to gather information about passersby’s locations, the time they passed the beacon, and what websites they visit, among other information. The beacons exchange data over Bluetooth.

The phonebooth pingers seem to be in a pilot phase. For now, people’s devices will only trade data with the beacons if they have certain third-party apps installed and they’ve checked that they’re okay with the apps gathering data about them. But privacy advocates Buzzfeed spoke with worried that the beacons were installed without notifying New York City residents, or asking for their input. Scott Alexander reported on Apple’s beacon technology for Popular Science in April, warning that it is impossible to turn off without turning off Bluetooth, which users may want to keep on for their headsets or fitness trackers.

The company working in New York, Titan, received approval from city officials only. Titan owns thousands of New York booths and operates booths in San Francisco, Los Angeles, and other cities, too, Buzzfeed reports. The beacons also appear in other cities, but Titan wouldn’t tell Buzzfeed any details.

The beacons reveal a darker side to New York City’s plans to revamp its little-used pay phones. The city has been looking to update the phonebooths for some time now. It’s turned 27 booths into Wi-Fi hotspots. (“No personal information will be gathered and no advertising or promotions will be presented during the Project’s trial period,” says this information page about the hotspots.) Last year, city officials held a contest for companies to submit ideas for the booths. Finalists included ideas for turning booths into touchscreen information kiosks, or solar-powered columns where people could call emergency services—or just a cab. Months after the city announced its contest winners, Titan began installing its Bluetooth beacons into existing stations.

Some of the pay phones may undergo more changes soon. The city’s contracts with the companies that now operate and maintain them, in place since 1999, will expire on October 15.