Spotting drunk drivers from a distance. With lasers. 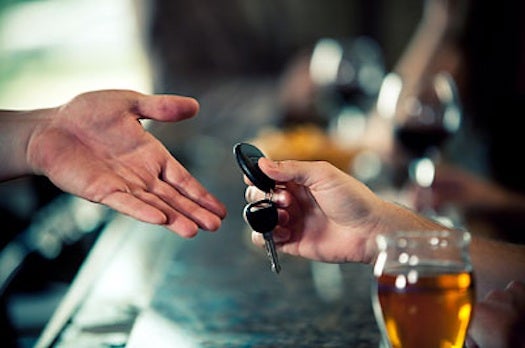 It’s a bad idea to drink and drive. No rocket science there. But with the goal of reducing drunken driving, researchers have gone high-tech, creating a laser device that can detect alcohol vapor within a moving car, from alongside the road. After the laser is shone through a speeding vehicle, a mirror bounces it back to a detector that can sense small concentrations of alcohol.

In the study, published in the Journal of Applied Remote Sensing, the researchers found that it could detect the amount of alcohol exhaled by a drunk person with a blood alcohol concentration above 0.1 percent. There were a number of assumptions that went into that calculation, but the researchers suggest that the device may be even more sensitive than stated, since the temperature of the human lung is higher than the device used in the experiment, and thus breath may contain more alcohol in the real world than modeled in the lab. (That said, the U.S. National Transportation Safety Board says you’re drunk at 0.05 percent blood-alcohol content.)

The device could be fooled, as the scientists admit, by alcohol exhaled by tipsy passengers, or a spill in the car. Or open windows, or air conditioning or fans… but anything to narrow down the number of cars stopped by police could help, they say.

As an aside, I was initially thrown off by the suggestion that the device could measure breath concentrations of 0.1 percent and higher, as stated by SPIE, the international society for optics and photonics (and publisher of the study journal). But this is wrong–if breath contained this much alcohol, the person would be long dead. A typical blood-to-breath alcohol ratio is 2,100, meaning that the concentration of alcohol in a drinker’s bloodstream is about 2,100 times higher than the concentration of ethanol in the breath. You can see for example that this nifty BAC calculator appears to use the same multiplier.

So if you ever face social pressure to drink and drive, just glance off into the middle distance and say, “I would, but for the lasers. The lasers, man.”

(I also just realized that this is the second post I’ve written today about sensing chemicals in the breath. Pardon me while I go brush my teeth.)