“What’s your recommended glassware for an IPA?” 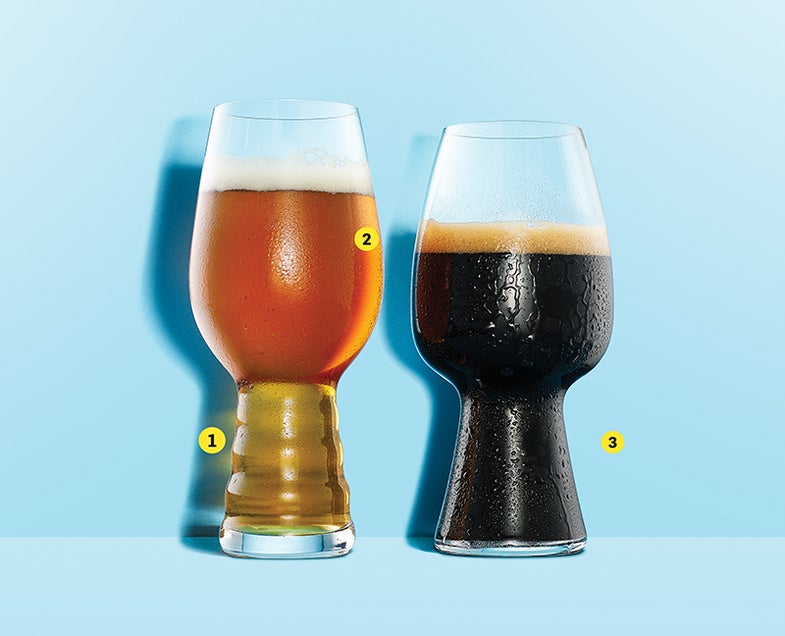 Brewers spend years perfecting a chocolaty stout or balanced IPA, but when it comes to showcasing their craft, a pint glass serves about as well as a bucket. To rectify this crime against taste, the glass makers at Spiegelau created a line of beer-specific glassware. The vessels ($24.90 for two stout or two IPA) better convey the complexity of craft brews—and keep them cold and foamy longer.

Bubbles form at nucleation sites, such as imperfections in glass. The IPA glass has a ribbed base, which boosts surface area and, with it, potential sites, so bubbles can form over the life of the pour. .

The curved bowl of the IPA glass directs hops’ aroma—which accounts for up to 75 percent of beer’s taste—into your nostrils. Beer lands on the middle of the tongue, so it hits more taste buds.

When beer pours over the edge of the bowl and into the base, turbulence froths nitrogen into stout’s signature head. With every sip, the angled base re-creates the initial pour, reviving the fizz.

Spiegelau claims that the straight walls of a pint let beer flood into the mouth, triggering an antidrowning instinct that causes the tongue to press against the teeth. If this occurs, beer may not hit every type of taste bud; it could miss sweet ones and taste bitter.

A thick-walled pint glass has the potential to hold onto and, therefore, transfer more heat into a beverage than a glass with thinner walls. Warm beer traps less carbon dioxide than cold beer does, so tepid brews can lose their fizz faster.