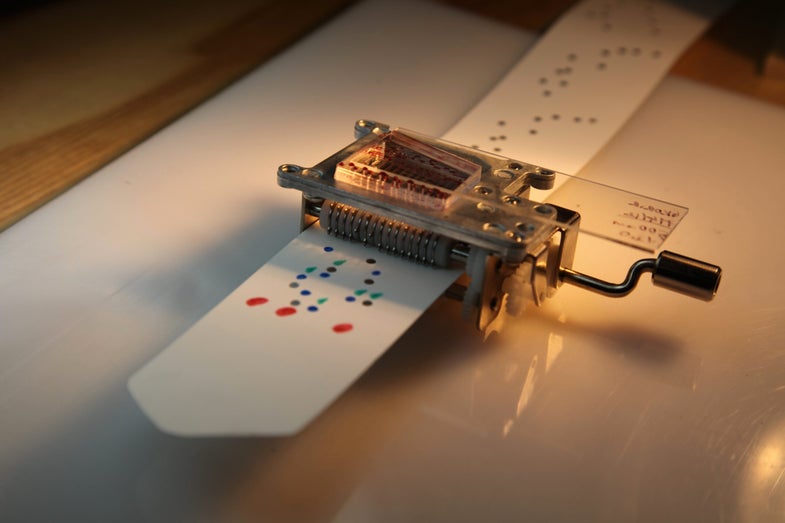 We’ve seen a lot of nostalgia for ye olde chemistry sets lately. Nobel Laureates have reminisced about playing with them. These days, sets containing radioactive uranium dust or toxic lead are not going to cut it anymore, but that doesn’t mean kids can’t get exposure to real science. The Society for Science & the Public—the nonprofit that runs the Intel ISEF science fair—recently held a competition to see who could make the coolest modern science set. The winners are just as hands-on as 1950s chemistry sets. Even better, they’ve got technology that didn’t exist then.

The first-prize winner is a hand-cranked microfluidics kit, made by a biochemistry professor and his graduate student. Microfluidics technology is what goes into lab-on-a-chip devices that mix and move different chemicals via tiny channels on a computer-chip-size platforms. Scientists are working on making microfluidic devices that will act like human organs.

In the prototype kids’ kit, players come up with a sequence of chemical reactions they want to make. They then punch holes corresponding to their sequence into paper cards. The cards are pre-loaded with chemicals. To get their reactions to go, players put the cards through the hand-cranked card reader, which releases chemicals one drop at a time at every punched hole. In a statement, the professor who created the system, Manu Prakash of Stanford University, said he envisions kids trading successful reaction cards like baseball cards.

The second-place winner is set of electrodes players stick on their bodies that sense the electricity the body produces when flexing muscles and sending messages in the brain. The electrodes hook up a lot of amplifiers, and then to electricity-powered things, such as a light bulb, a motor, or a speaker. With a hand squeeze or a thought, players can, say, turn on a propeller.

Let’s hope there’s a toy company out there watching these ideas—or that the creators themselves might work toward getting these out into the world.

Check out descriptions of the other winners from the Gordon and Betty Moore Foundation, which provided prize money for the winners, including $50,000 for the microfluidics kit and $25,000 for the body-electricity kit.