Here’s Why The FDA Is Regulating E-Cigarettes

After years of almost no regulations, the FDA wants to put (some) restrictions on vaping. 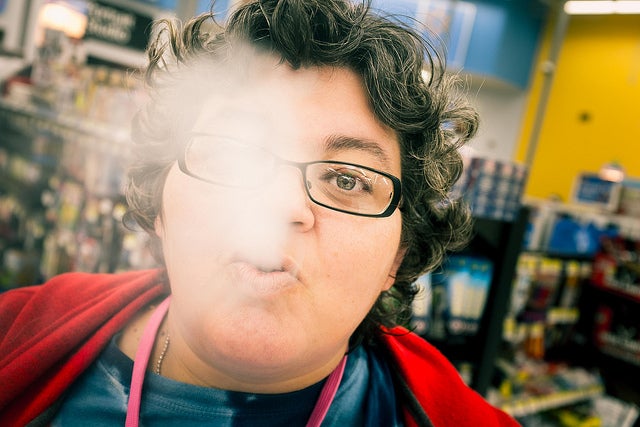 Early today, the FDA—after years of saber-rattling—proposed new rules to regulate e-cigarettes. You may have heard something about this, since people in both camps are losing it.

**Ah, so the FDA is really putting the clampdown on these, eh? **

Sort of. Up until now, e-cigarettes were almost completely unregulated; the new system would make some changes, like banning sales to minors.

Yes! Unless you are in the camp that believes e-cigarettes are a healthier (or relatively, at least) alternative to regular ol’ tobbacy products. In which case, this is a pernicious affront to public health.

Well, no. There are certainly reasons to be wary of electronic cigs. There was a blockbuster New York Times report about neurotoxins in the cigarettes, which are now “for sale by the vial, the gallon and even the barrel.” There was also a Centers for Disease Control report that concluded the “number of calls to poison centers involving e-cigarette liquids containing nicotine rose from one per month in September 2010 to 215 per month in February 2014.”

Okay. Here’s a discomfiting phrase: we know that these either are or are not killing you. It’s definitely one of those.

Quick primer on how e-cigarettes work: the cigarettes, rather than tobacco cigarettes, heat up liquid nicotine—that neurotoxin the Times wrote about—and let users fill their lungs with the resulting vapor. Each puff still has abot 90 percent of the nicotine you’d get from a tobacco cigarette. That means they’re still addictive.

As for health effects—the science is inconclusive. There’s research suggesting nicotine, whether or not you get it from tobacco, is enough to cause developmental and mood problems. There’s also research suggesting smoking e-cigarettes can—maybe—help some people quit traditional cigarettes, although the effects are far from a slam dunk. (Only about one in 10 people benefit, and they might not stick to it.) Teens smoking e-cigarettes can wind up switching to regular cigarettes, which you might be aware are bad for you; and up until now, there was nothing stopping adolescents from buying the cigarettes and vaping to their developing hearts’ content.

Sure is. We’ve got decades of slowly accreting research showing the damaging health effects of tobacco, monitored in smokers over the course of lifetimes. E-cigarettes have only been around since 2006. It’s going to take a while to figure this out, which is presumably the FDA’s case for regulation: getting out in front of e-cigarette development in case it does turn out to be a public health disaster.

All right. In the meantime, what else is up with these regulations?

Lots of stuff, actually. The rules would also federally prohibit the sale of cigars and pipe tobacco to minors, although e-cigarettes are grabbing the headlines. (Not for no reason: as dogoodnik teens in many states can tell you, there are state-wide regulations for cigars in place.) Electronic cigarette manufacturers, under the proposed rules, would have to make clear that their products contain addictive nicotine. They’d also be forbidden from saying their products are safer than tobacco cigarettes unless they can show the FDA some science that proves it, and they’d have to register all of their ingredients with the FDA. Minors would also be banned from buying e-cigarettes online.

What don’t the regulations do?

E-cigarettes come in flavors, which critics say make them more enticing to youngsters. The FDA can’t stop that under these rules, although a spokesperson told the Times that these rules would be the first step toward regulating that, too, if it turns out the flavors do cause adolescents to more frequently partake. It also doesn’t let the agency regulate the marketing of the cigarettes, at least for now.

Okay. So what’s next?

The new regulations could go into effect in about a year, although if manufacturers circle the wagons and sue, they could be pushed back much longer. With a soaring multi-billion dollar business on the line, we could have a fight unfolding soon.