Pac-Man, but with microbes 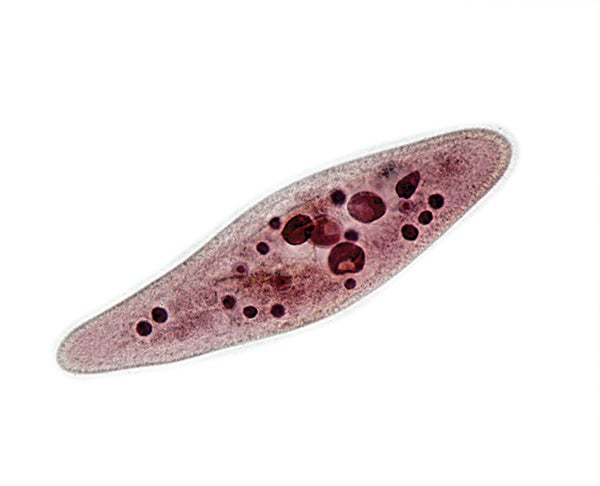 Videogames may seem like the last place for fruitful work in biotechnology, but Stanford University bioengineer Ingmar Riedel-Kruse has reinvented 1980s classics to enlist living microbes. His custom electronics and augmented-reality software coax microorganisms to play key roles in Pac-Man, Brick Breaker, and other reimagined 8-bit titles. Here’s a look at how Riedel-Kruse’s rig works.

Riedel-Kruse uses single-celled protozoans called paramecia that typically live in ponds. Changes in an electrical field can cause some species to alter their steering (a behavior called galvanotaxis). The microbes selected for the videogames swim toward electricity using cilia that cover their bodies.

A shallow, thumbnail-size chamber with a glass bottom corrals the paramecia. Electrodes lining the chamber’s edges are wired to a controller with an omnidirectional button. Pushing it left, for example, induces an electric field that guides the paramecia like a remote-controlled swarm toward the left electrode.*

Each paramecium appears as a speck to the naked eye, but a webcam paired with a 5x-to-10x magnifying lens displays the microorganisms clearly on a monitor. The camera is fixed above the chamber, with LEDs for illumination.

Object-detecting software turns the physical setup into a game by locating paramecia as they move around the chamber. Meanwhile, a video overlay enables the organisms to interact with digital images. In the game PAC-mecium, microbes “eat” pellets as they swim past them, and in soccer they “kick” the ball when they come into contact with its cartoon image.

* Hobbyist Geva Patz made his own version of Riedel-Kruse’s gaming console with laser-cut acrylic, pencil lead, and copper tape. It uses an electroencephalogram headset for a controller, allowing players to direct microbes with their thoughts.