Othermills work like the opposite of 3-D printers, cutting material away instead of building it up. 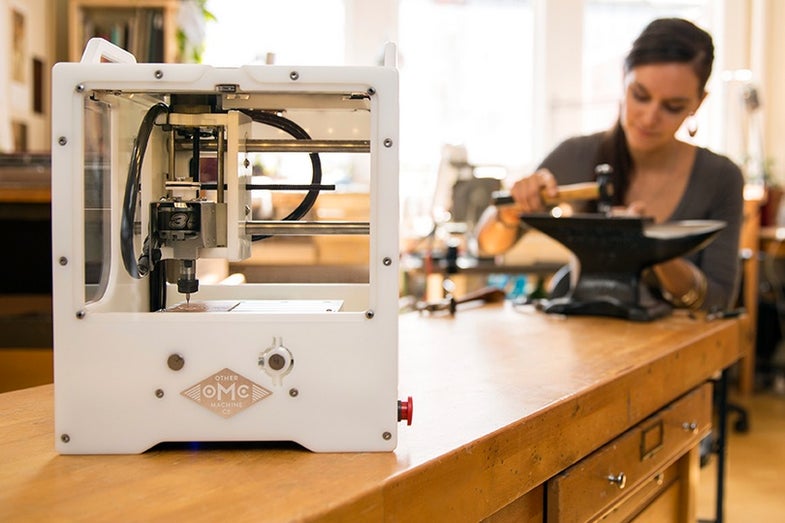 You can think of an Othermill as the opposite of a 3-D printer. Instead of building up objects from raw materials, Othermills create objects by cutting away a larger block of material into something smaller. They’re like tiny robotic sculptors, similar to the artists who chisel away at a big block of marble until it becomes a work of art.

Like home 3-D printers, however, Othermills are made to fit on a tabletop. And they’ve gone on sale this week, so just as with 3-D printers, you can now buy one.

One Othermill machine costs $2,200. It carves materials that are softer than its cutting instruments, including certain woods and plastics, printed circuit boards, and certain metals like brass, copper, and aluminum. The machine has a precision of one one-thousandth of an inch (about 0.02 millimeters) and works faster than 3-D printers do. Users load programs into the Othermill in popular file formats, which are listed on the Othermill website.

What can you make with all that? In a press release, Othermill’s manufacturer, a San Francisco-based startup called Other Machine Co., talks about letting small businesses prototype electronics quickly. Meanwhile, Other Machine Co.’s Instructables profile has some more whimsical suggestions. There’s a Halloween stamp kit, a tiny synth that makes eight-bit music, and a light-up necklace cut from circuit boards. You could potentially incorporate all of these at once into your Halloween costume.

The Othermill isn’t the only tabletop “3-D cutter” you can buy. In March, Make magazine listed a few other options, including both commercially available carving machines and machines that are still Kickstarter projects. Othermill itself began as a Kickstarter project last year and only finished shipping products to its backers last month, the company reports. Now it’s up and manufacturing for all customers.