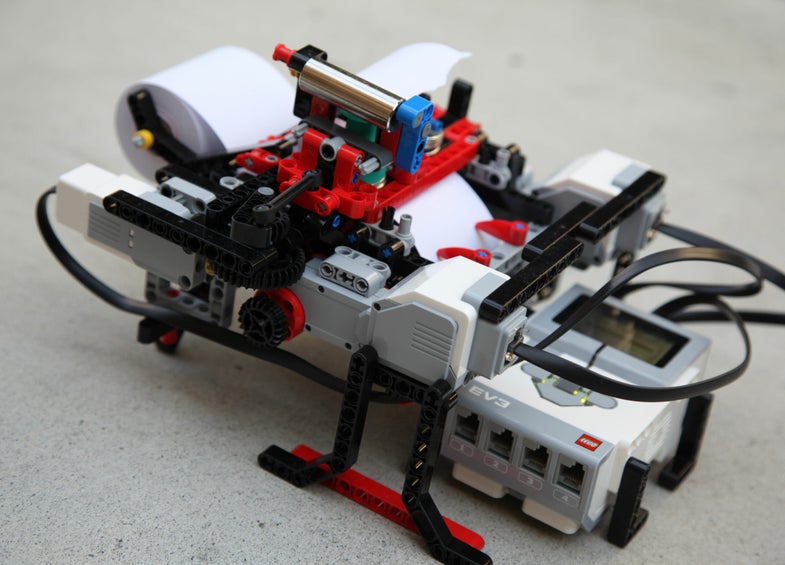 Hand a kid some LEGOs, and you’ll get anything from a sword to a starship. The same adaptability that makes the bricks amazing playthings also endears them to makers, who use the simple toys to create complex machines—at a fraction of their usual cost.

Twelve-year-old Shubham Banerjee first heard of braille when his family received a mailer raising money for the blind. He then researched braille printers online and learned they cost $1,800 or more. Banerjee thought he could build a cheaper version out of his favorite toy, so he bought a LEGO robotics kit and created the Braigo for only $355. A thumbtack on the Braigo’s print head punches braille letters on a roll of paper. “It’s very easy,” Banerjee says. “Even my eight-year-old sister can use it.”

A year ago, chemical engineer John Cole co-developed a circuit board that turns a Raspberry Pi minicomputer into a robot. Inspired by Google’s goal to scan all the books in the world, Cole paired his device with a LEGO Mindstorms EV3 set and adapted it to quickly digitize printed text. Cole’s BrickPi Bookreader has a wheel and robotic arm to turn each page, and a camera to snap pictures. Then character-recognition software converts the photos into a digital copy of the book.

To scrutinize objects at the nanoscale, scientists use an atomic force microscope (AFM). But the instruments can cost $100,000 a pop. Last year, an international group of students built a roughly $250 prototype from LEGOs, hacked electronics, and 3-D–printed parts. Like a regular AFM, the LEGO one constructs images by measuring the distance between a sample and a probe on its arm. This summer, students worked to refine the model and bring its price below $100.