The PopSci Smackdown: What the eggheads are fighting about.

Is the Red Planet White or Blue? Geologists battle over water and CO2. 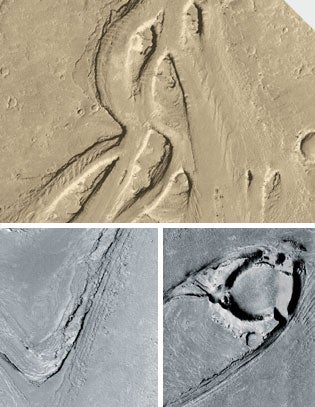 ONE VIEW: MARS’ SOGGY PAST
Scientists think these teardrop-shaped mesas (top) were formed by water gushing out of a fissure. The streamlined formation around a crater (left) may have been formed by water carrying sediment. The crater slowed the water down, causing sediments to be deposited in layers (right).

For years, scientists thought that Mars was a cold, dry planet. But pictures sent back by the Mars Global Surveyor over the past three years have rocked that long-held view. Now, many scientists think that the planet may in fact have once been a warm, wet world-what University of Arizona geologist Victor Baker calls a Blue Mars. The Surveyor images show fissures, gullies, valley networks, and layered rocks that resemble sedimentary deposits-features normally formed by water. But a few dissenters are offering another explanation for the eroded landscape: Carbon dioxide, not water, shaped the Martian surface, they say. According to this view, dubbed White Mars by University of Melbourne geologist Nick Hoffman, Mars was always a frozen wasteland.

Evidence supporting each theory continues to accrue in scientific literature. The journal Geophysical Research Letters, for example, recently published two studies, one backing each side.

Scientists at the University of Arizona and NASA’s Goddard Space Flight Center studied pictures of flat-topped mesas located below a fissure named Cerberus Fossae. Because the mesas have a teardrop shape, with their rounded ends pointing upslope (see top photo), the scientists conclude they were streamlined by floodwater gushing from the fissure. The water probably percolated into porous lava rock, forming shallow ice that, according to the team, may still exist today.

White Mars
Hoffman and researchers from the U.S. Geological Survey studied the rims of the Hellas Basin, a gigantic Martian crater. They found two regions in the Basin’s rim-the Malea and Hesperia lava plains-that are several hundred meters lower than surrounding areas. These plains also lack the triangular peaks common to the region. The erosion, they say, was caused by a mixture of gaseous and liquid carbon dioxide trapped in the Martian crust. In volcanically active areas, such as the Hellas Basin, molten rock crept to the surface and heated the carbon dioxide, which then expanded until it caused an eruption and a debris flow. Water alone, they argue, could not have moved such a large volume of material over such a short time.

Can’t We Be Friends?
Most scientists currently lean toward a Blue Mars. This is very good news for NASA because Blue Mars makes a more exciting target to explore. After all, the probability of finding life on a wet planet is much higher than the chance of finding it on a frozen one. But many researchers think it’s more likely that both water and carbon dioxide play starring roles in Martian hydrology. Ultimately, says USGS geologist Jeffrey Kargel, “I don’t think it’s likely to be an either-or situation.” In fact, Kargel speculates that there may be large quantities of carbon dioxide dissolved in water beneath the planet’s surface-something a little like Martian soda pop.