Zika Found To Cause Birth Defects In Newborn Mice

Which could make it easier to find a treatment 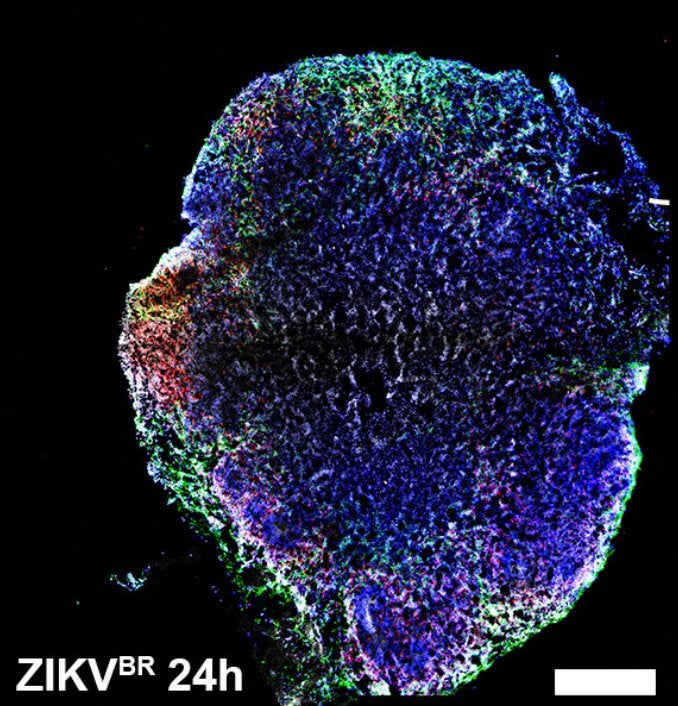 For a while now, scientists have thought that Zika, the mosquito-spread virus that is currently spreading through Brazil, is causing microcephaly, a developmental condition in which babies are born with abnormally small heads. But showing that this is true has proven difficult. Now, a study published today in Nature, may provide one of the most definitive connections yet. In the study, researchers found that Zika causes birth defects in newborn mice. This is the first study to show this connection in an animal model and could provide a way to study and potentially prevent microcephaly.

Back in February, the World Health Organization declared the possible Zika-microcephaly link a global health emergency, despite a lack of definitive proof that the virus was causing this condition. Since then scientists around the world have been working to discern this connection, including a study published last month in Science that used organoids, or mini brains grown in a lab, to show that Zika preferentially attacks neuronal tissue in the developing brains. That study, along with many others, helped the CDC declare a definitive connection between Zika and microcephaly.

Until now, researchers haven’t shown this connection in an animal model. In this new study, scientists extracted a Zika virus strain from an infant born with microcephaly in Brazil and injected it into pregnant mice about halfway through pregnancy, when the fetal brain is still developing. When the baby mice were born, they showed signs of cortical malformation, which isn’t exactly like microcephaly in humans, but is similar in that it is caused by destruction of neuronal development in the brain.

The study also demonstrates clearly that the Zika virus can pass through the placenta and can also be detected in the brain. Given this, the researchers think microcephaly could be “just the tip of the iceberg” for how Zika can affect a developing brain. During a press briefing yesterday, study author Patricia Beltrão-Brag said that the results suggest “that the health effects of Zika are likely to be widespread.” However, more research is needed to understand what those factors may be.

The research raises other questions as well. The amount of the virus that the researchers injected into the pregnant mice was a significantly large amount. The researchers acknowledge that right now, it’s still hard to determine what is the correct amount of the Zika virus that would mimic a realistic amount, or how that amount translates from mice to humans.

This paper comes in addition to two other studies, published today in the journals Cell and Cell Stem Cell, which also showed that brain damage occurred when Zika was injected into pregnant mice and directly into the fetuses themselves. All three of these studies further demonstrate what the CDC has confirmed: That Zika is causing microcephaly.

These are the first studies to find the Zika-microcephaly link in an animal model, which scientists can now use to study the mechanism through which the Zika virus attacks neurons during brain development and at what point it does so. It could provide a much needed method to further study how Zika is causing microcephaly, and ultimately how to stop it from doing so.