Crushing their way across the top of the world

The Arc7's knife-shaped double hull breaks ice at both ends. It consists of two layers of steel reinforced by ice belts on the bow and stern. Ice belts are bands of extra-thick steel that extend from a meter above the waterline to a meter below. Additional internal ribs brace the ice belts from within the ship's structure to absorb the stress of crashing through 7-foot-thick ice. Sensors inside the hull continuously run fatigue analysis to sniff out weakening areas all the way down its 300-meter-long structure. Daewoo Shipbuilding and Marine Engineering
SHARE

There’s a lucrative shipping route between Europe and Asia that has the potential to cut thousands of miles and months of time off the trip. The only catch: it’s covered with thick, ship-sinking Arctic ice.

Heavy ice blocks the Arctic route from December to July, more than half the year. Even with icebreaking escort ships, few merchant vessels run it.

Now, Daewoo Shipbuilding and Marine Engineering is building the world’s first icebreaker tankers–16 of them–to carry liquid natural gas (LNG) through the route year-round. LNG tankers today have to be escorted by icebreaking ships that clear the way through the Northern Sea Route.

The Yamal LNG project, run by companies in Russia, France, and China, proposes drilling more than 200 wells in the Arctic to produce 16.5 million tons of LNG per year, supported by Daewoo’s first 16 Arc7 tankers. Year-round, Yamal LNG will ship LNG from the project’s Sabetta port in Russia’s Yamal Peninsula westward to Europe, South America, India, China, and South Korea. For the warmer half of the year, it’ll also ship east from Sabetta to Japan and South Korea.

As Russia leans more heavily on fuel exports and the prices for them drip lower and lower, a dormant 17th-century Russian ambition is coming back to life: to open the Arctic year-round.

Here is how the icebreaker tanker will work: 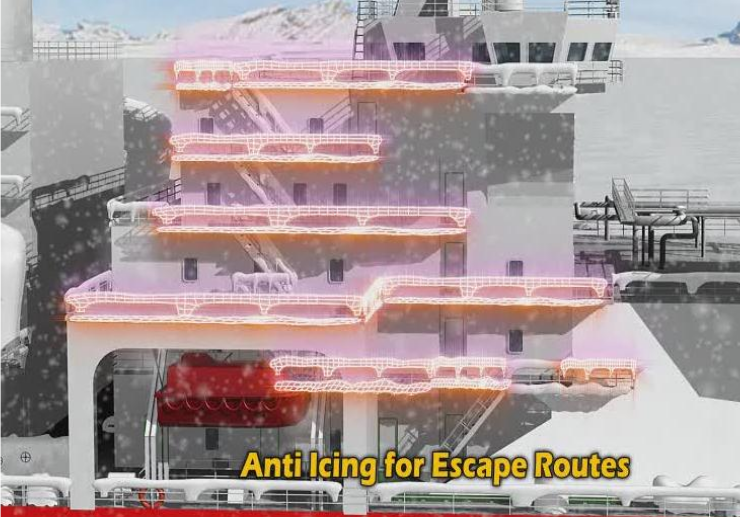 The Arc7’s bridge, from where the ship is driven, is entirely enclosed and the mooring space at the ship’s bow is roofed and covered on two of its three sides to shield crew from the Arctic’s cold bite and soaring seas. A searchlight atop the bridge watches for ice floes too big to drive through. Five stories of exterior platforms cut an escape route from all levels of the superstructure to a semi-covered lifeboat station enclosed on three sides to shield it from ice buildup. 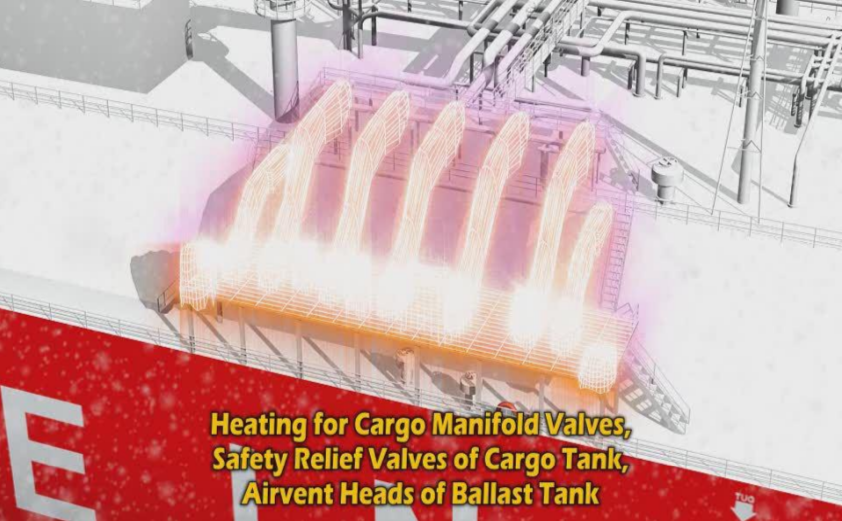 Heating cables that run underneath the top deck’s floor panels carry warm anti-icing solution to high-pressure anti-icers that crew use to spray down the deck’s ice buildup. When unused, they slip electrically heated covers over the anti-icers to prevent them from freezing over. Safety relief valves automatically vent gas from the storage tank, ballast tank, and lower decks if pressure builds beyond the normal operating level. If pressure builds too high, the tanks rupture. All relief valves are heated so that they won’t stick shut when needed. Rather than mount the engines within the ship, the Arc7 hangs three ABB Azipod electric engine pods below the hull. The three 15-megawatt motors put out the equal of over 60,000 horsepower, a third more powerful than the Titanic. Azipods pad fuel efficiency by ten percent compared to a traditional engine cluster because the hull is smoother without the fixtures and brackets to mount a drive shaft. There’s no rudder, either; the pods swivel to steer the ship. They can rotate 360 degrees so that the ship runs in any direction, even sideways and backwards. 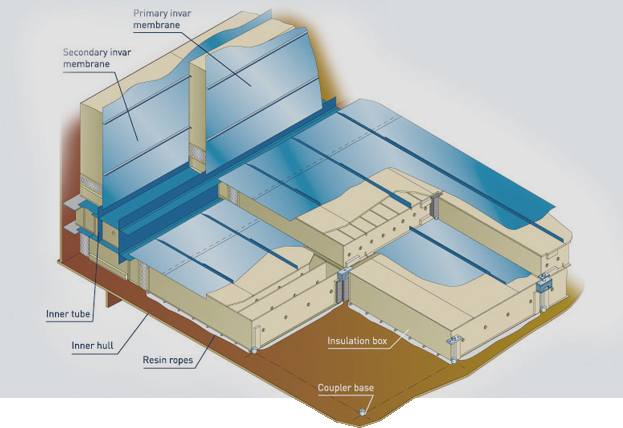 Up to 172,600 cubic meters of LNG is stored in a sandwich of two 0.7-mm-thick GTT NO96-GW cryogenic membranes. Like a balloon poked by a finger, the flexible nickel-steel alloy bladder shifts around impacts that would rupture a solid tank. Glass wool in plywood boxes around each membrane insulate the LNG from temperatures of -50 degrees Celsius; manifolds channel heated air around the boxes for extra thermal protection. Load-bearing resin ropes and solid nickel-steel tubing connect the two membrane-insulation layers to the hull to transfer stress away from the tank and to the ship’s structure instead.

The Arc7’s knife-shaped double hull breaks ice at both ends. It consists of two layers of steel reinforced by ice belts on the bow and stern. Ice belts are bands of extra-thick steel that extend from a meter above the waterline to a meter below. Additional internal ribs brace the ice belts from within the ship’s structure to absorb the stress of crashing through 7-foot-thick ice. Sensors inside the hull continuously run fatigue analysis to sniff out weakening areas all the way down its 300-meter-long structure.
icebreakers
shipping
ships