Trampolines are more dangerous than you think

And no, the padding and nets don’t really help. 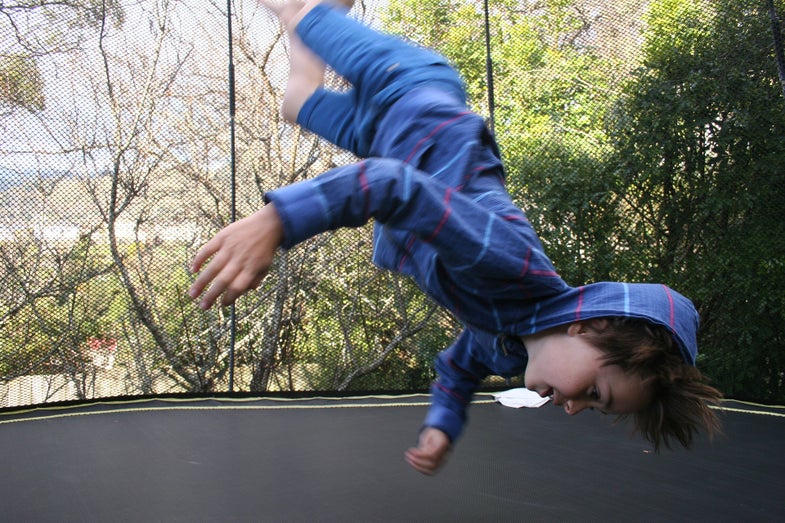 Kids have no fun anymore, amiright? Back in the day we used to play in the streets! We chased cars! We climbed trees and we fell and sometimes we got hurt—but that was okay! If only we could go back to those days. Life was so great when we didn’t really understand the risks involved in cherished childhood activities.

Sadly, we don’t live in that time anymore, so it’s time to break the news to you: trampolines aren’t safe. They’re giant bouncy surfaces for kids with undeveloped coordination to fling themselves around on. This actually isn’t news, but it has been in the news lately because a mother put out a now-viral picture of her three-year-old in a cast after he broke his femur at a trampoline park. When she took her kid to a doctor, she was told that kids under six shouldn’t even be allowed on household trampolines, much less set loose to bounce around at a trampoline park with a ton of other people. And more to the point, she was told that all of this was already in the safety recommendations written by the American Academy of Pediatrics.

Is the AAP made up exclusively of killjoys? Maybe. Then again, trampolines put kids in the hospital every year, and it’s the AAP’s job to try to prevent those injuries. Activities like swimming or biking definitely hospitalize more kids than trampolines, but since those are much more popular than trampoline-ing we don’t know whether that’s because swimming and biking are actually more dangerous or just more widespread. Either way, let’s not kid ourselves here: trampolines aren’t super safe. Are they the most dangerous childhood activity? No, of course not. But that doesn’t mean we can’t take some precautions.

Learn how to take turns

Three-quarters of all trampoline injuries happen when multiple people are on board. Bouncing alone means you’re in control of how high you’re going, and there aren’t any stray vibrations to turn your controlled flip into a flying cannonball off the side. Plus you’re not tempted into the inevitable competition to see who can go the highest. And most importantly, your kid won’t bounce their noggin off another kid’s noggin if they’re jumping solo.

Those pads and nets aren’t much help

Sorry, but that padding on the springs isn’t going to keep you from fracturing your collarbone. Maybe it will prevent some scrapes, just don’t expect it to keep you totally safe. A lot of the padding that comes with trampolines breaks down quickly. You’re supposed to replace it regularly, but when was the last time anyone did that? The role of every trampoline is to sit in the backyard rusting away, losing crucial joints and shedding padding until your parents pawn it off on whoever is willing to drag it away.

And the nets aren’t much better. Yes, they’ll keep you off the ground, but most trampolines injuries happen on the thing itself. You’re landing on a solid—albeit stretchy— surface with more force than a normal fall, and you’re flailing around as you do it. Of course you’re going to land funny and break some bones once in awhile. And to add insult to literal injury, lots of kids see a net as more of a challenge than a safety feature.

As it turns out, small children were not designed to withstand strong forces. This includes falling from any significant height, which is essentially the objective of playing on a trampoline. As such, trampolines are not ideal places for little kids.

Kids under six just shouldn’t be on trampolines, period. Let their little bones (and their sense of coordination) develop a little more before you put them up there.

Let’s be realistic, you’re all still going to jump on trampolines

Doctors tell people not to smoke and only to drink in moderation—that doesn’t mean people don’t do those things. Life involves inevitable risk, and no one is saying you shouldn’t ever bounce. They’re saying, “bounce your heart out! Just remember that this is kind of dangerous and you should treat it as a risky activity.” They’re also definitely saying not to let toddlers on there. And that if you go to a trampoline park, remember that there are zero regulations for running them, and that the 20-year-old who signed you in cannot and will not protect you from harm.