What Were Offices Like Before Computers And The Internet? 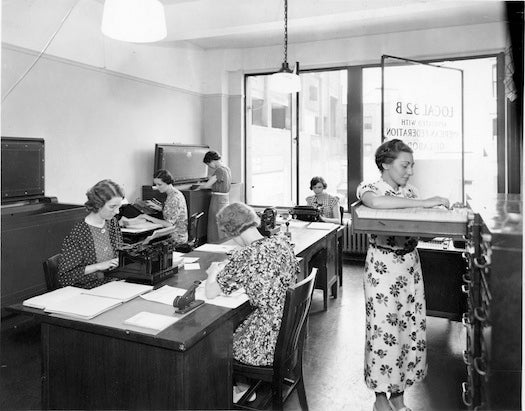 Sometimes while browsing Reddit (the land of aww-inspiring animal photos, sarcastic image macros, and the occasional “Ask Me Anything” with a current U.S. president) we find a discussion thread that perfectly illustrates the amazing ways in which science and technology have morphed our world. Case in point: Yesterday, Reddit user FLHCv2 asked the more than 3 million subscribers of the subreddit AskReddit: “Older Redditors, what were offices like before computers and the internet became mainstream?”

Here are some of our favorite answers. From user inbetweenthemargins:

Loud and smokey. If you’ve ever banged around on an old typewriter, even the electric kind, try to remember that sound and multiply it by 20 or 30 going full tilt. Now, go into a closet, close the door, and smoke a carton of cigarettes. That’s what it was like.

Ouch. Not quite as glam as Mad Men. User rytis makes it sound a little more quaint:

People smoked at their desks, and you could look out over a sea of cubicles and know who was in by the smoke curling up over their cubicle walls. Research was done in libraries. We even had our own office library, which was filled with phone books, encyclopedias, manuals, research books, trade magazines, and newspapers.

User YourNewPope on what it was like to be one of the first techies:

I did programming pre-widespread-Internet. We used to have to look up things in books. Software was delivered in trucks.

From another early programmer, user aRoseBy:

In the late 1970s … I was working as a COBOL programmer in a big insurance company, writing billing and accounting programs. I would write lines of code on coding sheets: these were pages of graph paper, twice as wide as long. I would write a program and drop the coding sheets in the inbox in the keypunch room. The keypunch girls (yes, all young women) would copy the program, one line at a time, to a stack of IBM cards. The cards were bound up in a rubber band, labelled, and put in a tray to be brought in the computer room. The computer ran 24 hours a day, 5 days a week.

User bluedunkie, on working in sales:

[P}eople usually held appointments more seriously, as there were no methods to cancel or contact salesmen, i.e., today you may get a text like “hey my day just got crazy, can we change to next week…?” Pre-smartphones, cellphones, texting etc, there was no way for the customer to contact you. I also had to make sure I had my 10 pence coins for making phone calls, which I carried in a sock. We lived in phone boxes.

Remember when there was no direct deposit? Suego26 does:

I used to do payroll for a linen cleaning company of about 150 employees. I would have to lay the check on a board with carbon copy paper and write the hours worked, the pay, the tax deductions and the amount of the check on the top ledger. After that was done I would go to a machine and punch in the amount of the check, insert it and press down to imprint the amount and the signature. It was time consuming, cumbersome, and the likelihood of human error was high.

And when the computers finally arrived? User jeannaimard describes the terror:

[B]ack then, computers were seen as a miraculous thing no one could ever undertand, and when you would have to train someone to work on a computer (or a terminal), they would be nearly fainting when told, then they were mortally afraid of touching the keyboard. It did not matter if the person was old or young, they were equally scared.

And the top comment of the thread, voted up by more than 700 users, from unclearbeer:

You could truly leave work. Work was work, and life was life.