Smartphone Tech Measures Your Pulse By Looking At Your Face

A Japanese company is working on the technology, which it says it'll have ready by the end of the year. 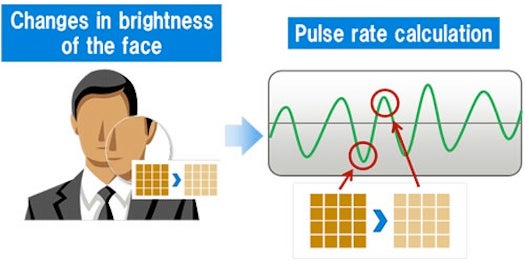 Japanese technology company Fujitsu announced today it’s working on the pulse-recording technology, which could help people track their own health, or spot suspicious reactions at concerts or at the airport, the company said in a statement. Fujitsu wants to have the tech ready for practical use within a year.

The new software uses cameras in devices to watch for the subtle color changes in people’s faces when blood rushes in with every pump of the heart. A recent iPhone app from MIT works similarly. MIT has also developed software that exaggerates that color change so it’s visible to the naked eye.

It’s hard to tell exactly where people would use this. An easy pulse-checker for workouts would be cool, but MIT’s Cardiio app already works for that. The Fujitsu statement suggests 9-to-5ers track their pulse throughout the day, but I’ve never been curious about my pulse during meetings or email-composing.

Tracking people at security checkpoints sounds interesting, but the technology would probably have to clear stringent tests showing its effectiveness before any country or agency would want to install something new and train all its employees for pulse-monitoring. At first glance, the technology sounds like it could mark too many people as suspicious for airport security. What if people have elevated heart rates just because they’re nervous about traveling, for example? We’ll see how much Fujitsu can do in a year.