The Science Press Is Going Crazy Over SpaceX’s Most Recent Rocket Launch. Why? 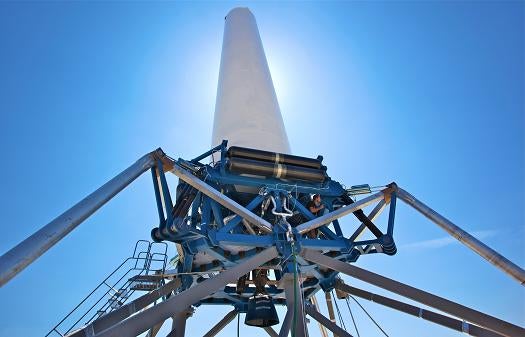 On Thursday, March 7, SpaceX’s Grasshopper rocket launched 263 feet into the air, hovered for 34 seconds, and then under its own power landed back where it took off. It was a record-breaking moment for the Grasshoper–in December, the rocket reached an altitude about half as high–but plenty of rockets have catapulted to even greater heights. So why was the science press really, really excited about the whole thing?

Because the rocket actually landed in the same spot where it took off. This is called a vertical landing, it doesn’t happen very often, and it bodes well for the future of space tourism:

Rocketry, since its inception, has been primarily concerned with breaking free from the constraints of Earth’s gravity. It has been less concerned with the return trip. More often than not, rockets are designed to crash upon return. (Of course, scientists make calculations to ensure that they crash as safely as possible, ie. aiming for the 70 percent of Earth’s surface not covered by land, deploying parachutes, deploying recovery ships to pick up the rocket, and so forth.)

That’s not to suggest that Vertical Take-Off and Landing (VTOL), as it’s called, hasn’t been highly sought-after. In fact, it’s something people have wanted flying machines to do since pretty much the dawn of flying machines. If you can land where you take off, you can develop rocket-launching pads pretty much anywhere. And the more launch pads you have, the easier it is to explore space–and the more viable the business model for space tourism.

The moon lander only had to navigate and then escape from the moon’s gravity, though. Earth’s gravity proves more difficult. In the 1990s, NASA worked on the DC-X, which was designed to take off from, and return to, Earth, but the project ultimately failed. The past decade has seen several new attempts, including NASA’s [ Mighty Eagle lander prototype, Project Morpheus, GENIE rocket, and attracted private attempts with 2009’s Lunar X Prize.

But SpaceX’s Grasshopper is the only one that has repeatedly and successfully demonstrated accurate landings back on the launchpad from which it launched, with this fourth and latest test achieving a precise landing from twice as high as the previous attempt.