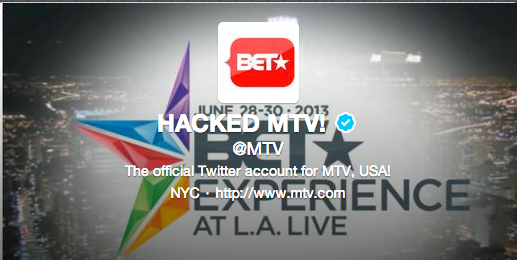 Yesterday, the password for Burger King’s official Twitter account was stolen, and whoever was behind it began doing some kinda funny things, like pretending Burger King had been bought by McDonald’s, or insisting BK employees “sniff percocets” in the bathrooms, or tweeting at journalists who wrote about the hack. Today, all hell has broken loose; Jeep’s account is displaying a similar streak of weirdness (“bought by Cadillac”), and just now, @MTV began behaving weirdly.

But! Given the difference in tone between the MTV account and the Jeep and Burger King accounts, we would venture to guess that the MTV “hack” is actually fake; the original hack repeatedly referenced Hitler, and overall seemed much more anarchic than MTV. We suspect this is MTV trying to capitalize on this wacky hacking: MTV’s “hackers” insist it has been bought by BET (which is owned by Viacom, the same parent company as MTV) and links to in-site stories, which of course MTV would want to do, but hackers would have no interest in doing. We’ll update when we learn more.