Starchitect Norman Foster To Design A 3-D Printed Lunar Base 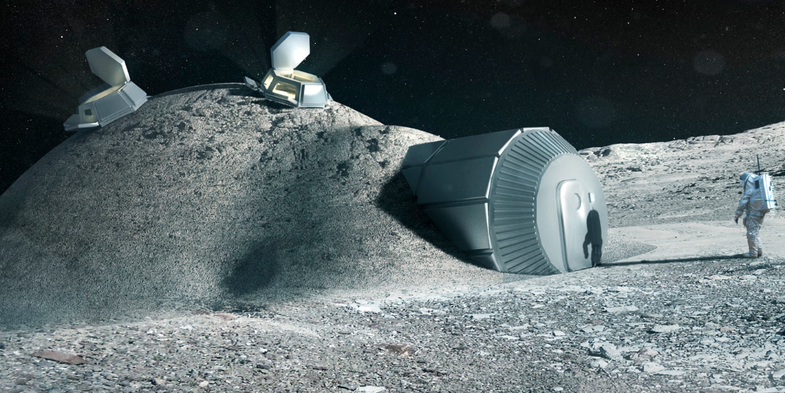 The first real lunar base should look literally out-of-this-world cool. Maybe it will look as spacey as Apple’s new campus, or Virgin’s Spaceport America. Foster + Partners, the architectural firm to dream up those ideas, has a new lunar-base concept for the European Space Agency. (Let’s hope it is better-executed than Las Vegas’ beleaguered Harmon Hotel.)

It may never be built, but it could be a feasible design for future moon base planning, according to ESA. Foster + Partners designed the new moon shelter concept based on a 3-D printer–which in some ways is liberating, because the machines can theoretically make anything. Building a lunar base would be a lot easier with a 3-D printer, because you could just scoop up material from the moon’s surface and melt it together. No massive cargo ships hauling rebar required–and that would mean less fuel, less risky rocket launches, and maybe even lower costs.

The architects designed a weight-bearing catenary dome, which has cellular structured walls to shield against radiation and micrometeoroids. Astronauts would live in inflatable habitats nestled beneath the dome. Domes are extremely structurally sound and can cover large spaces without support beams–a helpful design that would allow for space-maximizing open floor plans. The current design can house four people.

First, a cylindrical base would fly to the moon on a rocket, unfolding from a tubular canister when it arrives. The dome inflates from this cylinder, which you can see in greater detail in the slideshow. Then robotic rovers cover up the dome with regolith, sintering it together with a 3-D printer to create a hard shell. The shell is made from hollow cellular structured walls (which the designers compare to bird bones), and it would be strong but incredibly lightweight. It would also guard inhabitants against cosmic radiation and temperature fluctuations.

The team already produced a prototype wall, which weighs 1.5 metric tons and is made from simulated lunar regolith. It was printed with the help of 3-D printing mastermind Enrico Dini and his D-shape printer. By chance, they had a great source for very moon-like material: Basaltic rock from a volcano in central Italy, which bears a 99.8 percent resemblance to lunar soil, Dini said.

ESA’s General Studies Programme, which funds research into new topics, led the charge on this study. Next the team wants to examine how to control certain other factors, like potentially hazardous very fine lunar dust and the moon’s extreme temperature swings. 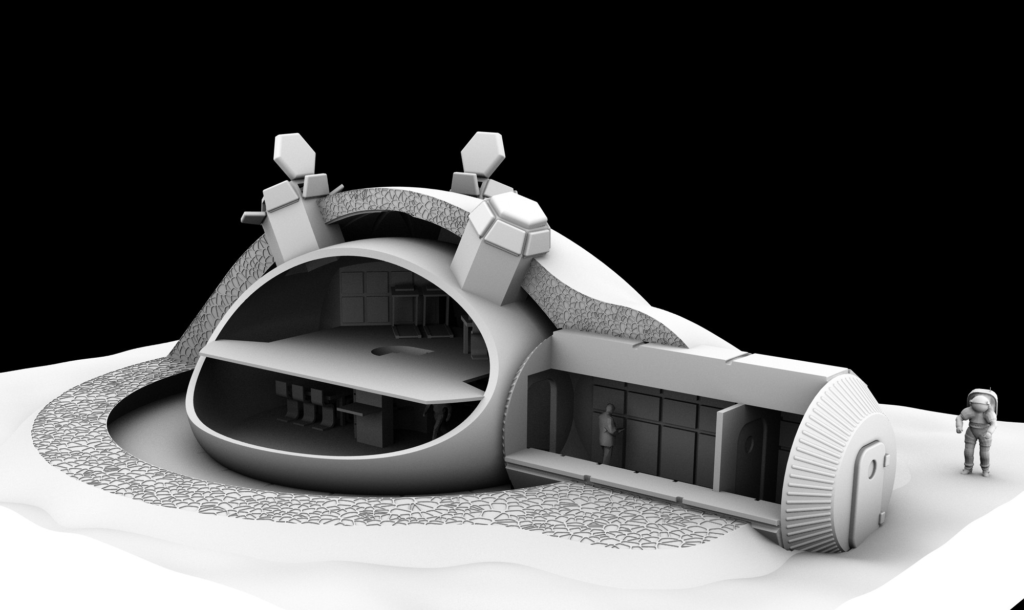 For ESA’s 3D-printed lunar base concept, Foster+Partners devised a weight-bearing ‘catenary’ dome design with a cellular structured wall to shield against micrometeoroids and space radiation, incorporating a pressurised inflatable area to shelter astronauts. 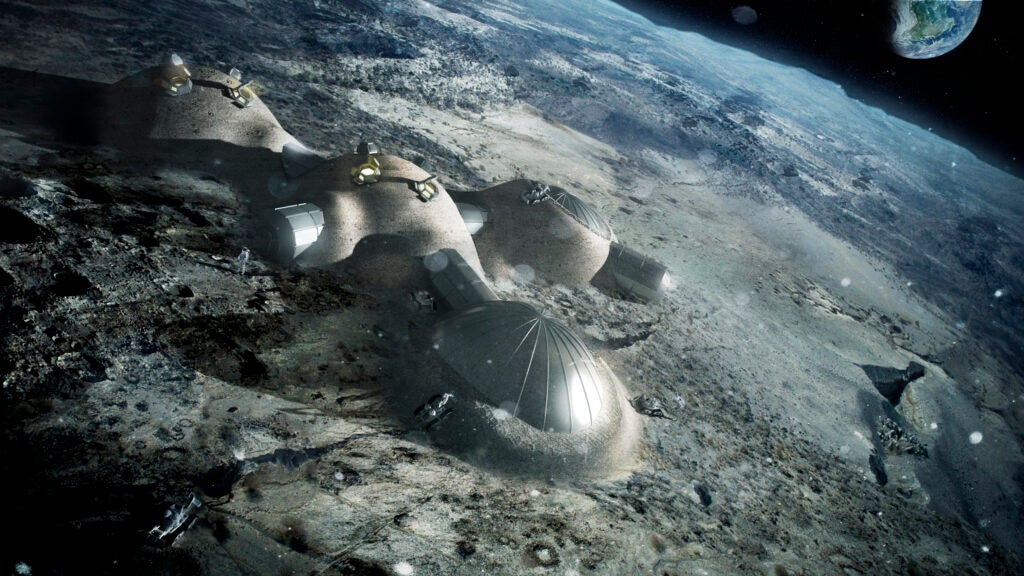 Once assembled, robots cover the inflated domes with a layer of 3D-printed lunar regolith to help protect the occupants against space radiation and micrometeoroids. 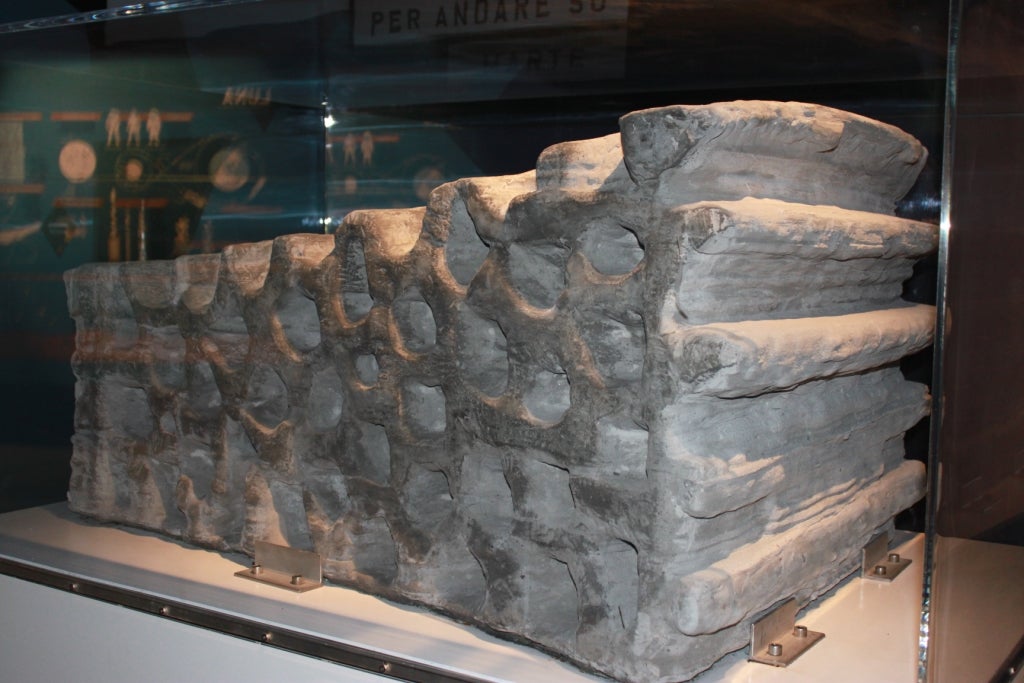 This block, weighing 1.5 metric tons, was produced as a demonstration of 3-D printing techniques using simulated lunar soil. The design is based on a hollow closed-cell structure – reminiscent of bird bones – to provide both strength and weight. The simulated soil came from an Italian volcano. A robotic rover is seen covering the inflatable habitation structure with lunar regolith. 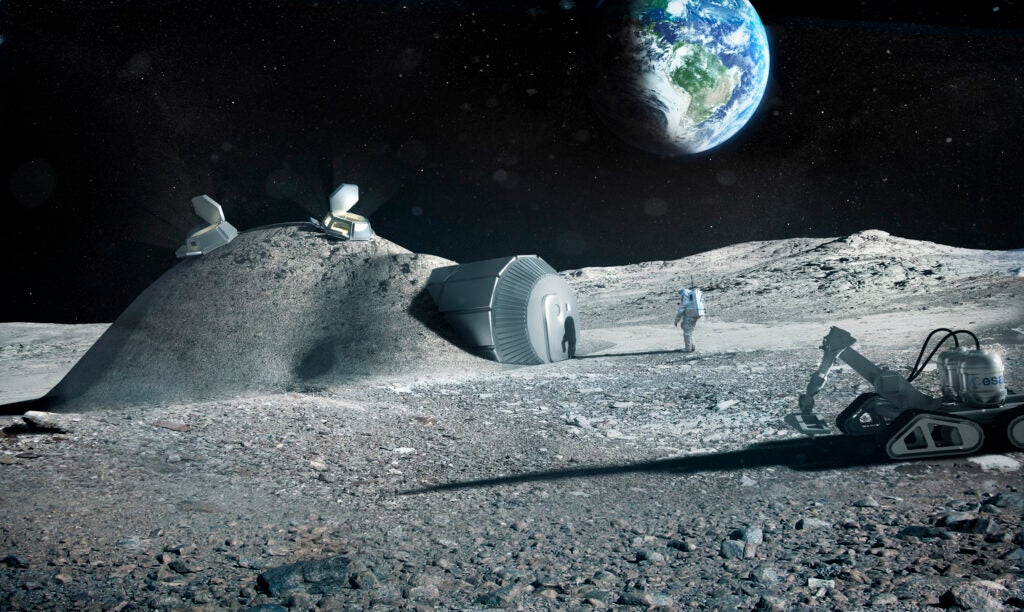 Setting up a future lunar base could be made much simpler by using a 3-D printer to build it from local materials. Here’s what the base would look like, as envisioned by renowned architects Foster+Partners. UK firm Monolite supplied the D-Shape printer for ESA’s 3D-printed lunar base study. Its mobile printing array contains nozzles mounted to a 19.6-foot frame, which spray a binding solution onto a sand-like building material. 3D ‘printouts’ are built up layer by layer. To build a simulated moon base, the company used simulated lunar soil and combined it with magnesium oxide, to use as the substrate. Then a binding salt converts the material to a stone-like solid. Monolite uses its printer to create sculptures, and is working on artificial coral reefs to help preserve beaches from energetic sea waves.
3-D printers
3-D printing
European Space Agency
lunar base
moons