A 3-D Printed House With No Beginning Or End 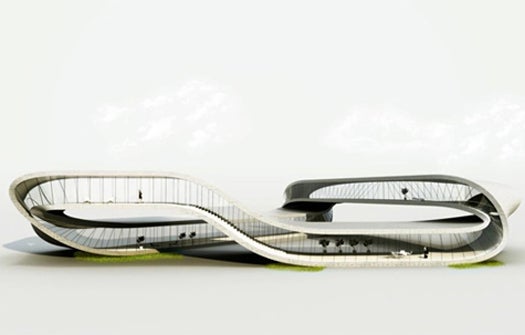 The architects at Amsterdam-based Universe Architecture have proposed some M.C. Escher-like buildings before. (See: this plan for a building that’s “both small and big.”) But architect Janjaap Ruijssenaars wants to go one step farther with a building that twists in on itself, never beginning or ending at all. To make that happen, he’s enlisting the world’s biggest 3-D printer.

Instead of creating a flat strip of material and bending it into a shape like a Mobius strip, the gigantic D-Shape printer will make pieces of the 12,000-square-foot building, spitting out 6-by-9-meter section that will eventually be assembled into the full building. (The printer’s inventors want to use it to print houses on the moon eventually, so this is a nice warmup.) A mixture of sand and a binding agent will make the frames of the structure, and each frame will be filled with fiberglass and concrete. Steel and glass will make up the facade.

The project could take about 18 months to complete, with the printer working for up to half a year. As for who’s buying it: Ruijssenaars told AFP that a Brazilian national park has shown interest in the building, which would cost $5.3 million to build. But it could still be used as a museum, or even as a home for some very lucky, math-minded millionaire.