The team wants to beat the world distance record for a pedal-powered airplane. 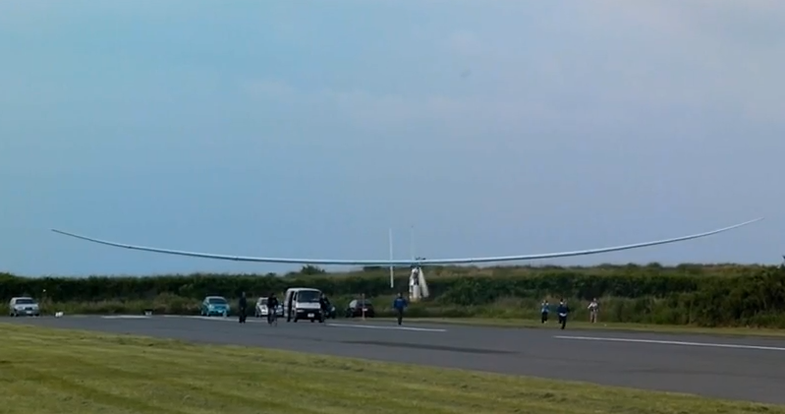 A team of Japanese motorcycle makers may soon remind the world that another type of bike–one with pedals–can be an incredibly efficient way to get around. Team Aeroscepsy is gunning for a new world record for distance flown in an aircraft under human power.

Team members built their airplane from polystyrene and carbon fiber, so it weighs only 81 pounds. Its wingspan stretches 117 feet, which is about half that of a Boeing 747, notes AFP. The craft is called Gokurakutombo, which means “happy-go-lucky” and apparently also “happy dragonfly” in Japanese. The team–whose members all work for Yamaha–wants to fly it 75 miles over the Pacific Ocean in Japan.

The plane can take advantage of thermal air currents to help it get around, but that’s a double-edged sword, because even a light ocean breeze can also work against it. This is especially tricky flying over water, as the lessons of Daedalus prove. Daedalus the real plane, not the Greek mythological hero. I researched Daedalus for my recent feature for the October issue of PopSci, which focused on the several ways humans can fly under our own power. The aircraft was built at MIT and holds the world record for human-powered airplanes, flying 71.5 miles from Crete to the Greek island of Santorini.

Piloted by an Olympic cyclist, Daedalus flew between 15 and 30 feet above the water throughout its journey, which was aided by a tailwind. But the landing failed because of a thermal gradient caused by Santorini’s black sand beach. One of the wings lifted higher than the other, turning the craft back around. Increasing shore winds eventually broke the tail boom and the plane splashed down a few feet from the beach. Pilot Kanellos Kanellopoulos was fine and swam to shore.

It’s not clear exactly what route the new Gokurakutombo will fly, but it will be a few miles longer than Daedalus’ flight. Team Aeroscepsy plans to take off from a field near Mt. Fuji next spring.