The Ford C-Max Energi is a practical plug-in: It's roomy, affordable, and it gets 108 miles per gallon. 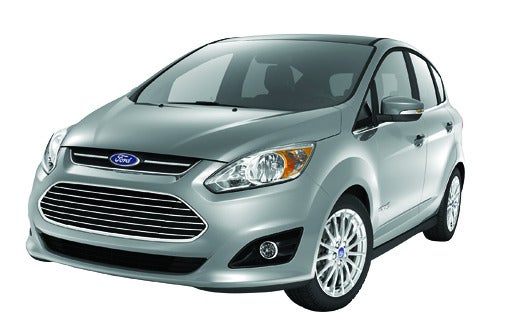 2013 Ford C-Max Hybrid: C-MAX Hybrid headlines Ford's transformed lineup, one-third of which will feature a model with 40 mpg or more in 2012, building on the company's commitment to give fuel-efficiency-minded customers the Power of Choice. The new C-MAX Hybrid is targeted to achieve better fuel economy than Toyota Prius v. (12/14/2011). Ford
SHARE

Plug-in cars save gas and cut pollution, but at a cost. The Nissan Leaf has a maximum driving range of about 75 miles. The Chevrolet Volt seats just four people. And at nearly $40,000 apiece, neither is cheap. The Ford C-Max Energi plug-in hybrid, by contrast, seats five and combines gas power and a grid-charged lithium-ion battery to reach the EPA-certified equivalent of 108 mpg. It goes 620 miles on a full gas tank and battery. And at $29,995 (after tax credits), it is by far the most affordable plug-in on the market. It’s the kind of car that could, just maybe, take automotive electrification mainstream. Here are five reasons why.

1. Gas-Electric Powertrain
The C-Max Energi combines a pair of electric motors and a 2.0-liter four-cylinder Atkinson-cycle gasoline engine (the same ultraefficient design used in the Toyota Prius). Together, they can push the car to a top speed of 102 mph; the C-Max can hit 85 mph on electricity alone.

2. Affordable, Compact Battery
Engineers gave the C-Max a relatively small 7.6-kilowatt-hour lithium-ion battery pack, which Ford assembles in Michigan. The Chevrolet Volt, by comparison, runs on a 16-kilowatt-hour battery. As a result, the Energi gets 21 miles of all-electric range to the Volt’s 38—but it’s $10,000 cheaper.

4. Breathing Room
The five-passenger hatchback has 10 more cubic feet of interior space than the Chevrolet Volt and nearly double the cargo area.

5. Quick Charger
Like Ford’s Focus Electric, the C-Max uses a 6.6-kilowatt onboard charger to fill its battery. Plugged into a 240-volt outlet, the charger fills the battery at a rate twice as fast as the Nissan Leaf, going from empty to full in two and a half hours.