Modern kitchens already contain multitudes of cooking-related gadgets, from iPads slicked with EVOO to excellet multitasking tools. But it would... 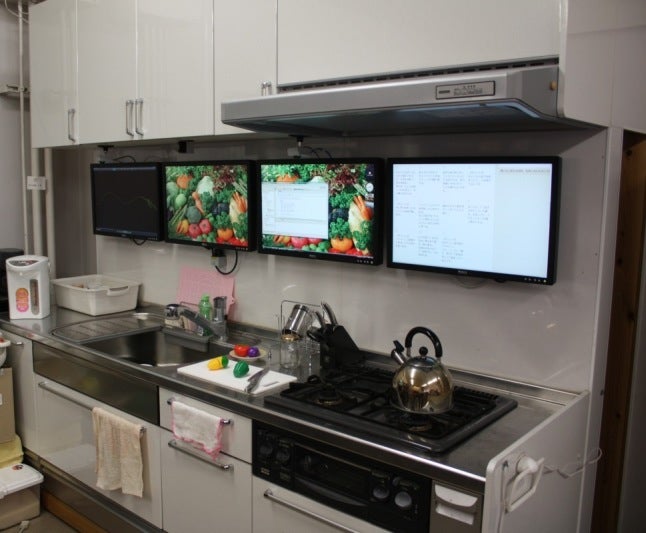 Modern kitchens already contain multitudes of cooking-related gadgets, from iPads slicked with EVOO to excellet multitasking tools. But it would be nice if the appliances themselves helped you cook, letting you know it’s time to stir the risotto, that you should add salt to your soup or how to debone a chicken. Researchers in Japan (where else?) have some ideas about how to do that.

Computer scientist Yu Suzuki and colleagues at Kyoto Sangyo University added video cameras and projectors into a kitchen ceiling, which can track ingredients’ locations and overlay instructions onto them while you mince. This way, you wouldn’t have to take your eyes off the food and dirty up a tablet or dead-tree cookbook.

For now, it can only help a novice cook fillet a fish and slice onions, but it does this very well, reports New Scientist. You would lay the fish on a cutting board, and cameras detect its orientation, determining where you should cut. In a somewhat disturbing feature, a speech cloud will pop from the fish’s mouth and relay written instructions. Suzuki and colleagues even added a small robot named Phyno, who sits on your countertop and monitors your progress, reading instructions or recipe steps.

Plenty of other researchers are working on similar projects, NewSci reports, including cameras that can detect when ingredients have been added to a bowl. Future kitchens could integrate thermal sensors and recipe-recognition algorithms, sending out an alert if you forget to add an ingredient, or do something horrible like mistake sugar for salt. Then anyone could theoretically master modernist cuisine.